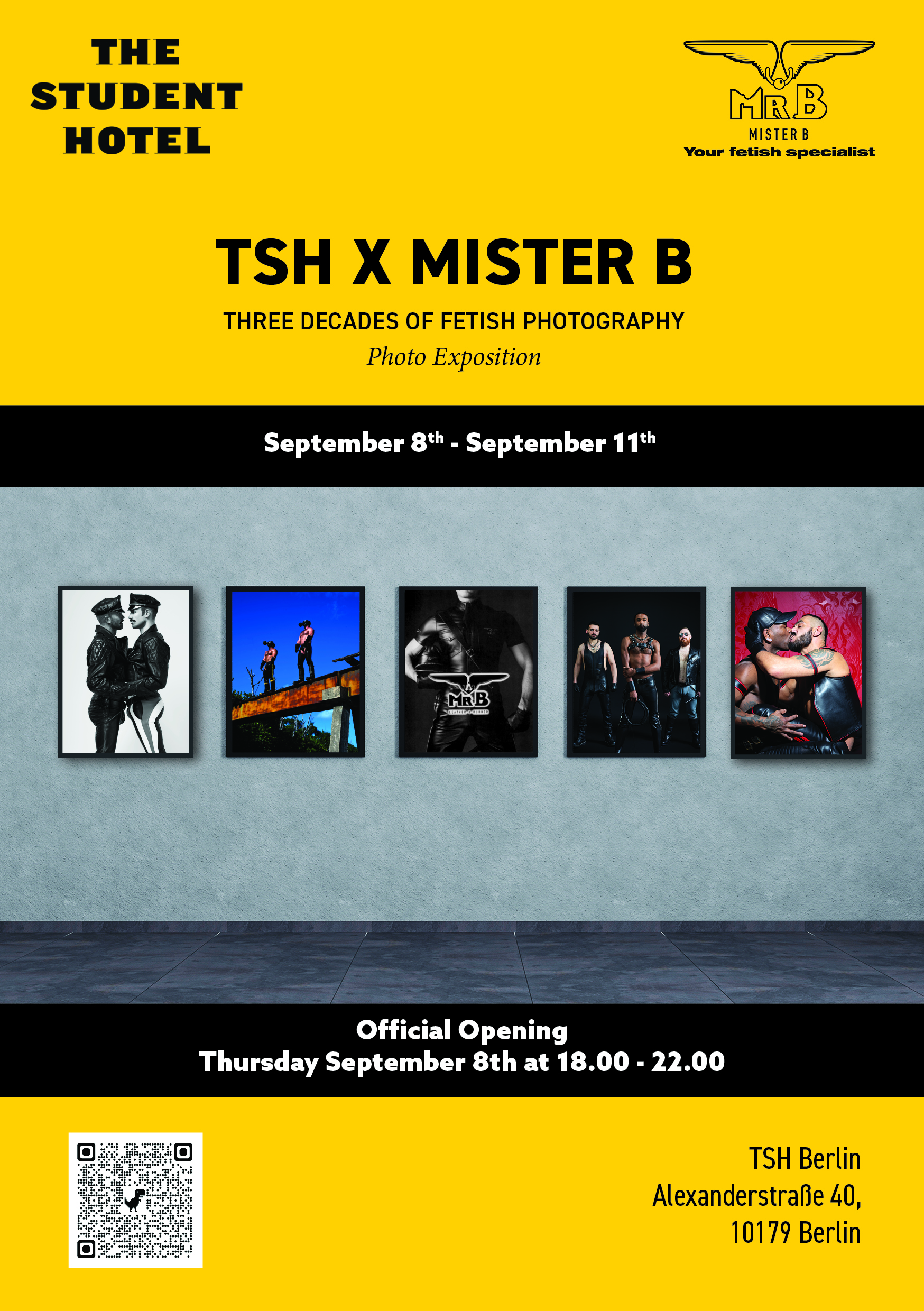 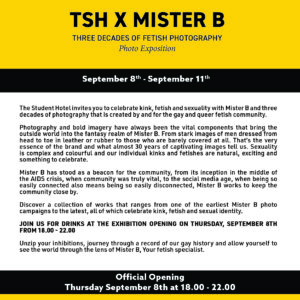 The Student Hotel invites you to celebrate kink, fetish and sexuality with Mister B and three decades of photography that is

The Student Hotel invites you to celebrate kink, fetish and sexuality with Mister B and three decades of photography that is created by and for the gay and queer fetish community.

Photography and bold imagery have always been the vital components that bring the outside world into the fantasy realm of Mister B, the Dutch, gay men’s fetish clothing brand. From stark images of men dressed from head to toe in leather or rubber to those who are barely covered at all, but with only restraints cuffed around their wrists and ankles, alluding to the actions in which the story’s characters are about to take part. It’s typically a kinky activity and often sexual in nature, but the viewer is only allowed to peek. That’s the very essence of the brand and what almost 30 years of captivating images tell us. Sexuality is complex and colourful and our individual kinks and fetishes are natural, exciting and something to celebrate.

Since 1994, Mister B has been a growing brand. From starting with one shop in Amsterdam’s red-light district to then the second one in Berlin and eventually became available through various shops beyond Europe, providing the fetish community with clothing and gear that encourages sexuality and promotes thriving gay and queer identities. Mister B has stood as a beacon for the community, from its inception in the middle of the AIDS crisis, when the community was truly vital, to the social media age, when being so easily connected also means being so easily disconnected, Mister B works to keep the community close by. From porn actors to shop workers, you’ll find community members are at the centre of each photographic narrative.

This collection of works ranges from one of the earliest Mister B photo campaigns to the latest, which is featured in the latest issue of the brand’s magazine Wings. Features works from talented photographers, such as gay, iconic, Dutch lensman Erwin Olaf to legendary, Canadian, gay fetish photographer Inked Kenny and many more. Community is both in front of and behind the camera. Art directed by the marketing team at Mister B, the images are typically made by and made for the gay gaze.

As the times have changed, so has the brand and this is demonstrated through photography. Defining what is sexy, cool and contemporary is the role a brand like Mister B indirectly plays within our community and as the meanings of those words shift, so does Mister B, allowing for a broader interpretation of ideas, identities and individualism. As a departure from its roots within the iron-clad dress code of the classic leatherman emerges the adventurous and rebellious new generation of kinksters and fetish fashion. The new rulebook is similar to that of the Fight Club…

Discover a collection of works that ranges from one of the earliest Mister B photo campaigns to the latest, all of which celebrate kink, fetish and sexual identity.

Join us for drinks at the exhibition opening on Thursday, September 8th at 18:00.

Unzip your inhibitions, journey through a record of our gay history and allow yourself to see the world through the lens of Mister B, Your fetish specialist.