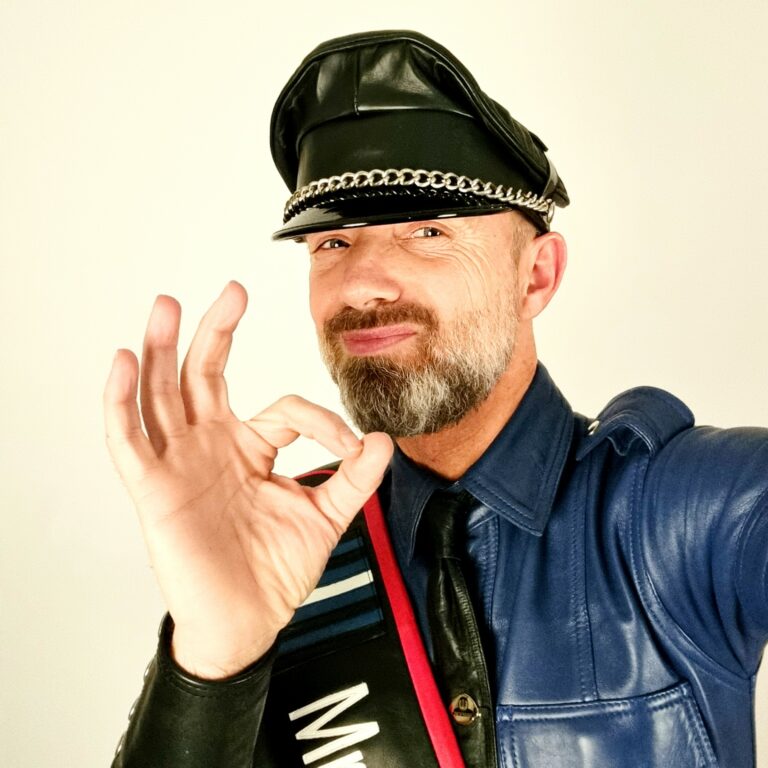 A note from Tio Lelieveld, on his year as Mister Leather Netherlands 2023

It was already eleven months ago that I won the title of Mister Leather Netherlands in Eagle Amsterdam at the end of October last year. I knew it would be a wild ride from the start, but I couldn’t imagine it would have been like this. Unfortunately, just after I won the title, our country went back into a Covid-19 lockdown. It feels like it was ages ago now. Because of this though, I couldn’t do too much, well at least not in person, but I also couldn’t just sit and stare at my sash the whole day either, so I thought of some things to do.

The first thing I did was I organized an Online Bingo, just for fun and to raise some money for a local charity. I sent out personalized postcards, together with my club, The MSA, and most importantly, I was very present at all my socials.

In December I took a big step and outed myself as a person living with HIV. I suddenly somehow felt the courage to share this in a video. I thought to myself does it matter if I tell the world that I am HIV positive and undetectable? The answer I came to was yes, as a Mister I think it does. I thought that now it counts more because I have more of a platform to share this information. I have so many different followers on Facebook and Instagram, and I realized I had the chance to inform others a little bit about being undetectable and the continuous fight against the stigma.

I think that the running theme in my year as a Mister connects not only the leather community but also the people who are not into the fetish world: It’s about not judging others. It’s especially important to note that, especially when you don’t know what’s really going on. I also want to bring the leather community together without only thinking about the sexual side of it. I like to encourage fetish as a way of life.

I really love that my work has been so supportive of me being Mister Leather Netherlands. I work as a train manager with NS (Nederlandse Spoorwegen) the Dutch railroads and just before the election, there was a big poster at Amsterdam Central of me in full leather with a little interview about me as both a leatherman and train manager. After I won, they really supported me. I was in the newspapers as the Mister Leather Train Manager. At Utrecht Canal Pride I was on the Trainbow Boat (Trainbow is a part of NS and Prorail). I even won the Trainbow award, for being a supportive member of the LGBTQ community. You can imagine how proud I was.

So after a few months of doing my online things and connecting with the community by mail, phone and apps the spring arrived, and the world opened again. I went to Barcelona for my first event abroad. It was a bit intimidating at first, but the community there was really welcoming to me. I had a great time, got to know many new people and after that, it was game on. I went everywhere I could like Berlin, Antwerp, Brussels, and Cologne, but, more important, I went to many of the pride events in the Netherlands. After all, I am Mister Leather Netherlands, and I want to be there for my community. I like to think it helps a bit when I attend the newer or smaller pride events, to show support and let the world see how great they are. Additionally, the Fetish Social Brabant was on again, and it was a huge success. There were a few other major highlights of this past year, and it won’t be a surprise that those are Darklands, Amsterdam Pride and of course Folsom Europe.

The best part of all of this was getting to meet and get in touch with so many amazing people. The different stories that I heard, sad and happy ones too. I got to introduce new people into the community, and no they were not only the young but also a few Leatherman who had not worn leather for many years, which is so amazing.

I have felt so proud to be featured in newspapers, on television and on radio programs. Because one of my biggest goals was to be visible, I think I can say that I’ve achieved that. That and a very special highlight for me, on a very personal note, was the exhibition of my paintings at Mister B Amsterdam during the pride season. That felt amazing, seeing my work in a shop that every leatherman in the world knows. 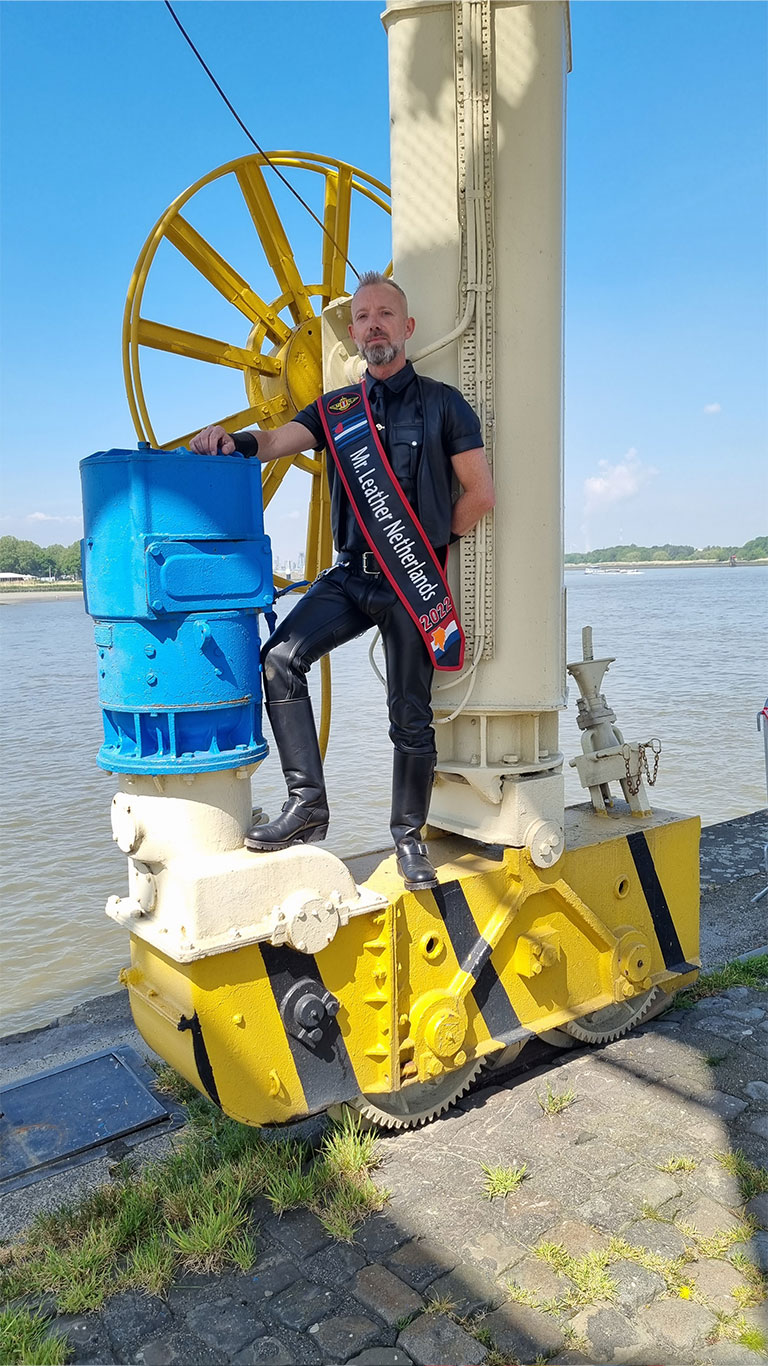 Well, the year is almost over, and although I did and saw a lot, I feel like there is always more I wish I could do, but I have no regrets. I want to thank all the wonderful people I met, everyone who supported me, my club the MSA and especially my teddy bear, my rock, my man, Ted. I couldn’t have done it all without you.

So, what’s left? I’m going to attend The Mister Leather Europe competition in Manchester next month. Do I stand a chance? I don’t know, but I do know there are some really great Misters in Europe right now, so I am happy to stand next to them and call them my sash family!

I hope to see everybody at the Mister Leather Netherlands 2023 election at Leather and Fetish Pride Amsterdam as I proudly pass on my sash to my successor.

From the 27th to the 31st of October 2022, the leather and fetish community will gather again for the highly anticipated, annual pride weekend in the heart of Amsterdam. Visitors can partake in various events, such as a BLUF meeting, kink workshops and even a fetish dinner. For those interested, there is the Meet & Greet with all Misters, plus, of course, parties and after parties. Along with the traditional events, there is also something new this year, the Fetish Flea Market, being held in The Web Bar Amsterdam, where people can sell or trade their existing fetish clothing with others. It is also a nice place where fetish-minded folks can meet. You can visit The Web, along with other bars when you join in the Fetish Pub Crawl. Visiting all the fetish-minded local bars for a drink dressed in gear is perfect to do as a group. And you don’t want to miss one of the more important events of the weekend, the MSA will organize the Mister Leather Netherlands election in the historical social venue Akhnaton Amsterdam on Friday 28 October, where the current Mister 2022 Tio Lelieveld will relinquish his title as we welcome a new king to the throne.

The other main highlight of the weekend for many is the Invasion party on Saturday, 29 October at Undercurrent Events Amsterdam and the party will, as always, be amazing. Catch DJ RW and other exciting international DJs, kinky shows, and a huge play area for an awesome night to be had! This is going to be a terrific leather and fetish weekend in Amsterdam.

The program is still growing daily and the most current program, as well as tickets, can be found at www.leatherpride.nl 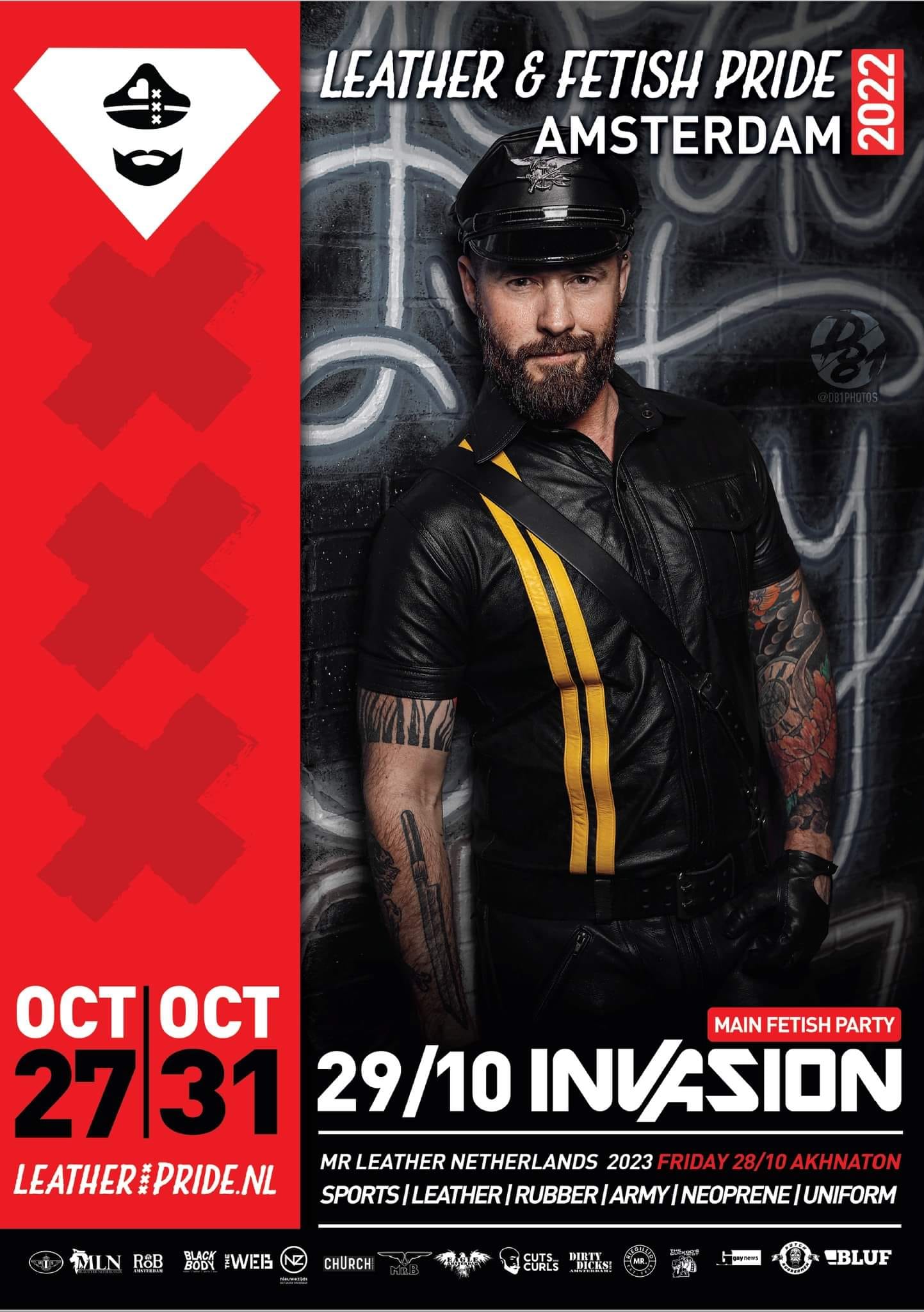