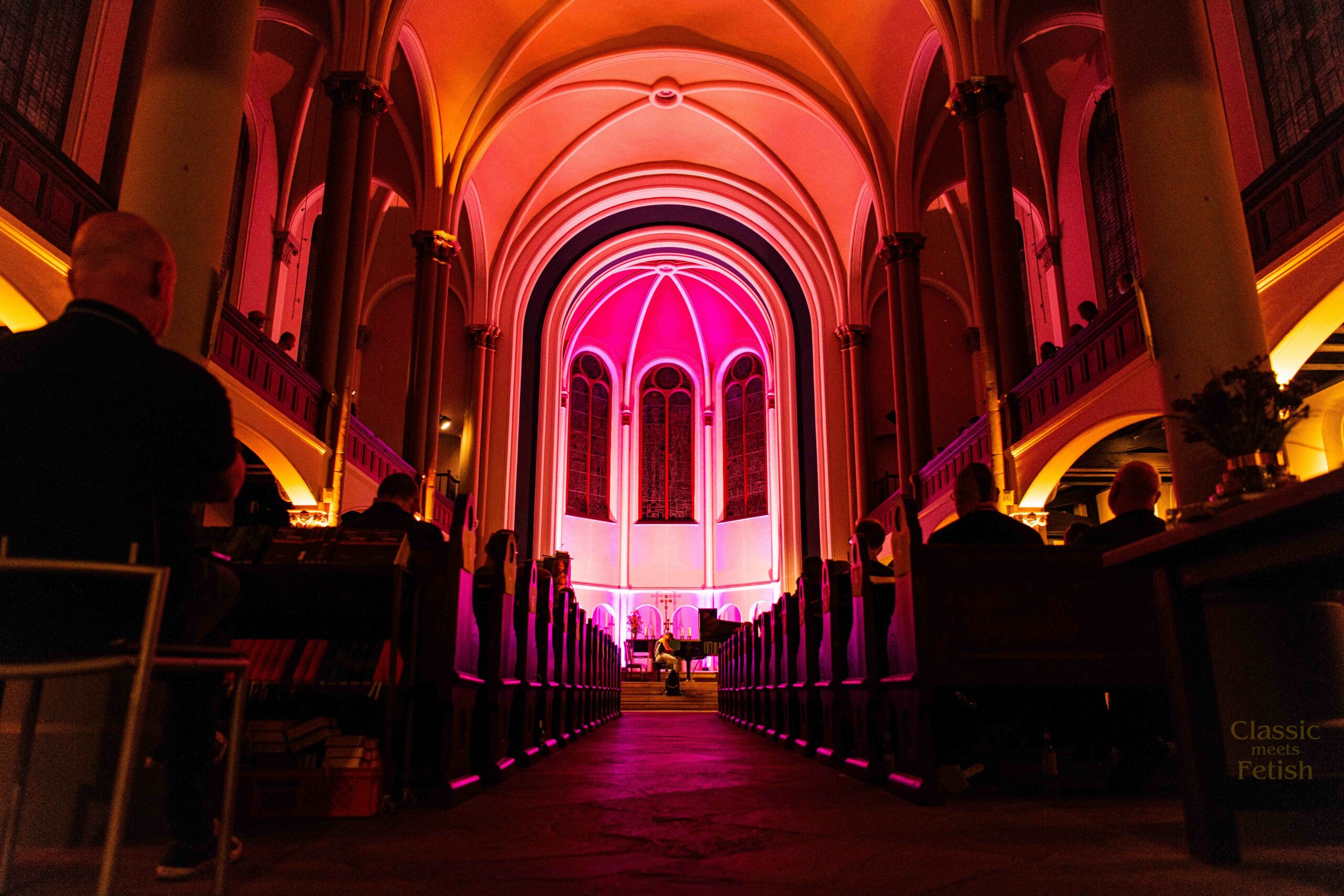 The Evolution of Classic Meets Fetish

Not many would claim that their best-ever memory of Darklands at Leather Pride Belgium was a mid-afternoon conversation over a coffee. But I will. It was in 2015 and I was chatting with a hot couple in love, squeezed head to toe in tight, shiny and worn leathers. Both of them, however, on the other side of 80 years old.

I was basically just killing time when I got into a chat with these older hotties, one with a walking stick and his partner in a wheelchair. They were telling me about their younger years together in leather, on the front line of gay rights and motorcycle clubs, being arrested by the police for wearing a filthy jockstrap in the public toilets – basically all kinds of things we take for granted these days. But when I asked if they were enjoying themselves at the Darklands, surrounded by hundreds of other sexy guys clad in leather, they shook their heads. “There’s nothing for us to do here!” they answered. “We can’t do the parties anymore. And nobody wants to see us hanging from the ceiling in chains when we can’t even stand for 15 minutes at the bar!” They had grown bored of the leather boat tours and the fetish dinners and couldn’t stand the smell of cigar smoke. They were feeling excluded from the larger social events frequented by the younger eye candy.

Already in 2012, when I was Mr. Leather Berlin, I’d had the idea of holding a piano concert for guys in leather and had suggested doing it myself during the Easter Berlin weekend in 2013; there was neither any real interest nor the money to hire a grand piano. But the idea had stayed with me, and during that particularly extraordinary conversation I could literally feel it bubbling inside of me. By the time I got home in Berlin, I had already scribbled some notes onto a Post-it: I wanted to organise an evening in fetish that was inclusive, something that was accessible for men and women of all ages, cultures, and physical abilities. It should promote communication, without sex in the foreground, and offer something delicious for the eyes. I didn’t know the first thing about organising concerts, but I did know that I’d need a location and at least some financial support for the piano hire. Hence, I took through the streets in my Wescos and went through Schöneberg to find both. Hamburger Mary’s at the Axel Hotel agreed to let me use the restaurant rent-free because it would bring guests to the bar. So, if I could only raise the money for a piano…

It’s one thing to be personally convinced of something, it’s a completely different thing to convince others of it. Most people reacted negatively, and I heard repeatedly that – even though it was certainly a good idea – it simply wouldn’t work. “Classical music? Tyrone, that’s never going to work!” said one friend of mine, almost dying of laughter. “The guys come here to Berlin for fetish sex at the parties, not to sit at a classical concert!” But my idea had become part of me, and because I believed in it, no amount of giggling could deter me. I’ll never know who laughed last, although I assume it was me, but the most telling point for me was knowing that those who laughed hadn’t had the pleasure of talking to those two leather octogenarians. And when I presented it to the manager of Mister B Berlin, Dominik, he almost immediately agreed to sponsor the piano.

I was so happy! What I had: a location and a piano. What I didn’t have: music, musicians or any experience in organizing anything like that. Facebook, I found, was perfect for asking a couple of other friends of mine, who I knew were hobby pianists like myself, if they’d like to perform with me. They agreed, but it was clear that they weren’t really excited about it, so I just kept asking around. That’s when things began to take their own dynamic. All of a sudden, I started getting messages from all kinds of people interested in taking part. Within only a couple of weeks, my inbox was full of applications and enquiries, which included all kinds of offers from fire-eating to self-composed music played by teaspoons on water glasses, and there were also one or two messages from professional musicians. That’s how I managed to get the first event off the ground without having to bore people by performing myself. It was a small concert in a dining room with around 70 guests, but it was a success. This proved that there was an interest, despite all the comments I’d heard before.

A year later, in 2016, I had a similar experience when I decided to organise Classic Meets Fetish in the Zwölf-Apostel-Kirche. Most people looked at me as if I had lost my mind! “The last place anyone wants to go in fetish, is a church!” was a sentence I heard more than once. Holding my fetish event in a place of religious worship was certainly a risk on several levels, also for the church board, but I was sure it would work. And in pre-pandemic times, we had an audience of around 370 people coming to the church to see and hear us every year. It is still a risk today, but one which the church is more than happy to share with me and one which Mister B thankfully still supports.

There are some lessons here that we can all learn from. For one, speak to everyone, even if you don’t want to have sex with them. Had I only been thinking about sex, that conversation at the Darklands – and therefore Classic Meets Fetish – might never have happened. Of course it’s hot watching and fantasising about the young, muscular, and beautiful guys running around in jockstraps, baseball caps, and boots, but our community is made up of so much more and so many people that can teach us new things. But most importantly, when you have ideas, no matter how silly they may sound to others, don’t let people take them away from you. Never let laughter drag you down or allow others to manipulate you, but instead, keep working hard to prove yourself right. Believing in yourself will enable you to find ways to bring your ideas to life with minimal financial and personal risk. Perhaps you’ll ask one hundred people for help, but you only need one person to agree! Like everything else, Classic Meets Fetish will probably one day be discontinued, but it’s still there now. And perhaps I’m now the only person laughing