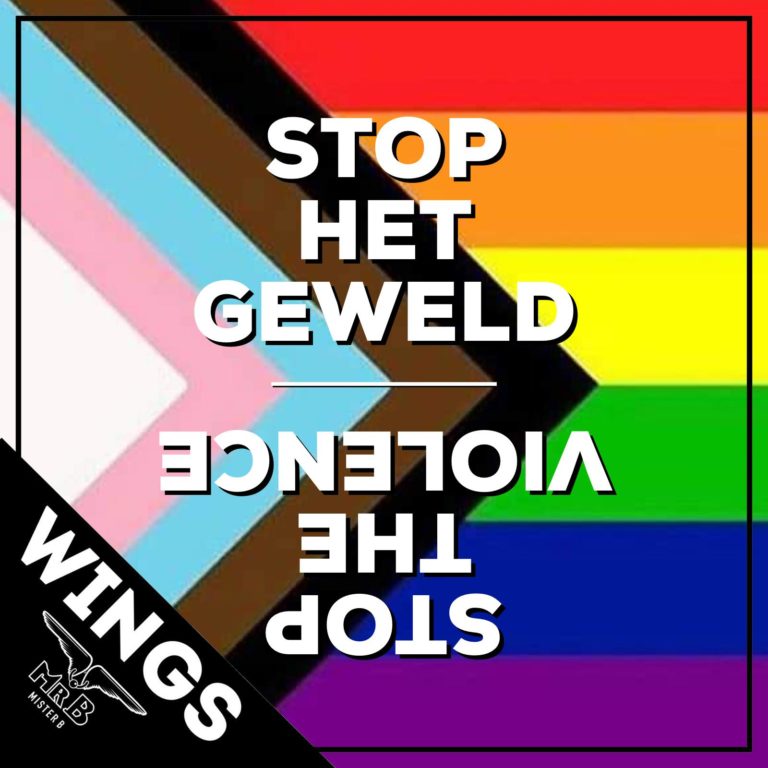 The world is changing, and although that can often mean something good, it can also work against us.  Just as we have seen more of what we call progress, we have also seen an increase in homophobia, transphobia, racism, xenophobia, and other forms of oppression and violence towards LGBTQ+ communities worldwide. We can all see very well what’s currently happening in the United States, but it is also important to note that these issues are not exclusively American by far.

Here in Amsterdam, we saw a recent news story about a gay couple in being verbally harassed by youth on their way to a supermarket. Also this year, a gay man was stabbed by someone because of his sexual orientation. These are not isolated incidents: many LGBTQ+ people encounter hate crimes and nearly half of the trans population in the Netherlands has experienced violence. This may be surprising to hear because we all know Amsterdam to be a very liberal city. We also understand the Dutch to be a very open and tolerant society, but that may be part of the problem. Tolerance is the exact word used to describe how many people feel about minorities around here. Tolerating yes, but unfortunately not necessarily respecting, accepting or supporting us for that matter. The term tolerance is and has been used with good intentions, but the reality is that it only helps those who use it to feel better about their role in society.

This is a global problem that involves everyone. If you are not doing work to actively support those suffering harassment and violence, then you are part of the problem. Silence is violence, as they say. Even something as simple as homophobic jokes, non-inclusive language, or negative stereotypes that perpetuate a view of queer people as less-than worthy. These biases should be challenged when heard or said out loud because they are at the root of the current problems we see with the continuing homophobic and transphobic violence, in Amsterdam and around the world. 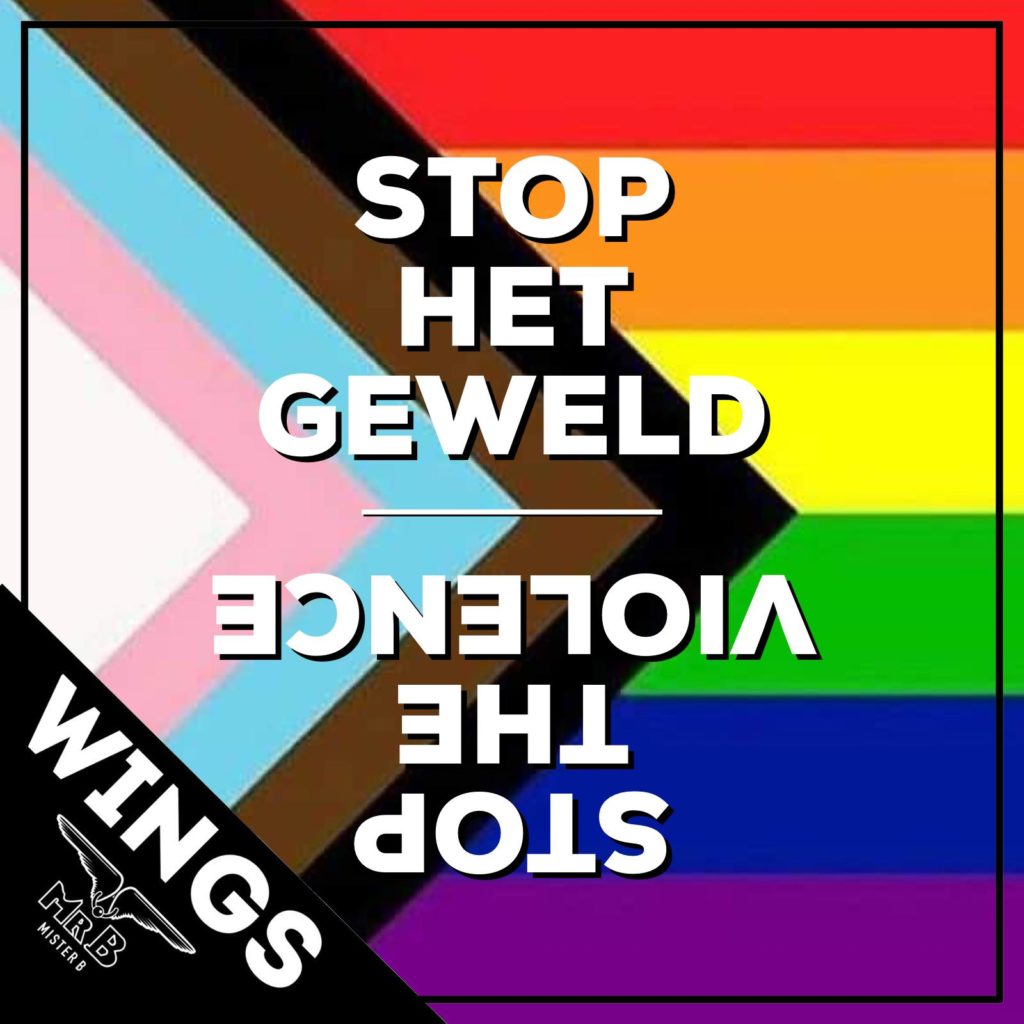 All violence is connected, from ignoring a homophobic statement you hear, to physical violence and murder. The Pyramid of Hate is a great way to better understand why silence is violence. The pyramid you see here shows the different levels of hate with genocide resting at the top of all the other levels of hate which support it. As you move up the pyramid the actions are more life-threatening, but each level impacts people negatively. The important takeaway here is that the upper levels are supported by the lower levels. When the lower-level behaviors or beliefs are seen as ‘normal’ then it makes the next level above acceptable. Even something as simple as the utterance of a homophobic joke is tied to the inherent value one has for homosexuals. Genocide doesn’t just happen, it grows from the acceptance of violence, discrimination, acts of prejudice, and biased attitudes. 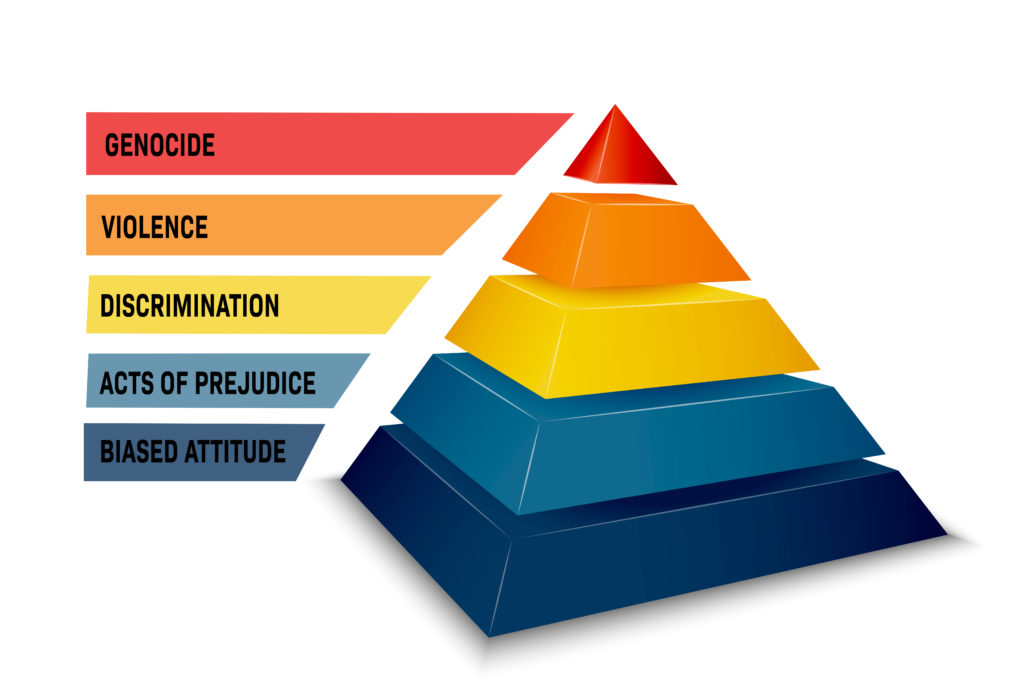 Until we are all safe, there is work to do. For this reason, there will be an anti-violence demonstration at Museumplein in Amsterdam on this Saturday, 1 August 2020. Sander Heuvelman and Ewout van Galen are two participants who felt inspired to take action against all the recent homophobia they’ve seen and heard about. Just like many of us, they are very upset about the discrimination that continues in this city. They want people to know about the violence that is occurring in this city, because awareness of it is lacking and action must be taken to work towards ending it. They want parents and guardians to know that tolerance and acceptance is something children need to be taught. That children need to understand they should be compassionate towards others, and why children need to experience compassion as well. They want local religious leaders to teach acceptance within their communities because they have an influential role and a social responsibility as such. They also want it to be stated that even if you don’t accept us for who we are, we will not stand for violence.

⇑Whatever your views are, you never hit another human being!

In addition to this protest on 1 August, Ewout and Sander thought of a plan which Ewout is currently trying to execute in Bos en Lommer, the neighborhood where they live. A plan for action to be taken to make changes in their community. They are applying to the municipality of Amsterdam for a series of projects in collaboration with local artists to create greater visibility of the queer community in their neighborhood, to show that LGBTQ+ people are living there, they are part of the culture and that there is no room for hate. These men understand that people have different opinions and views and that it allows conversations, but they will not tolerate violence. When the guys were asked if they worry that they make get negative backlash to the protest on August 1st, they said no, they are not afraid, but more importantly that if they do get a response it will be a great opportunity to have a conversation ‘and so we do our part in creating change!’ 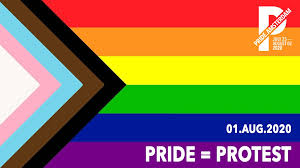