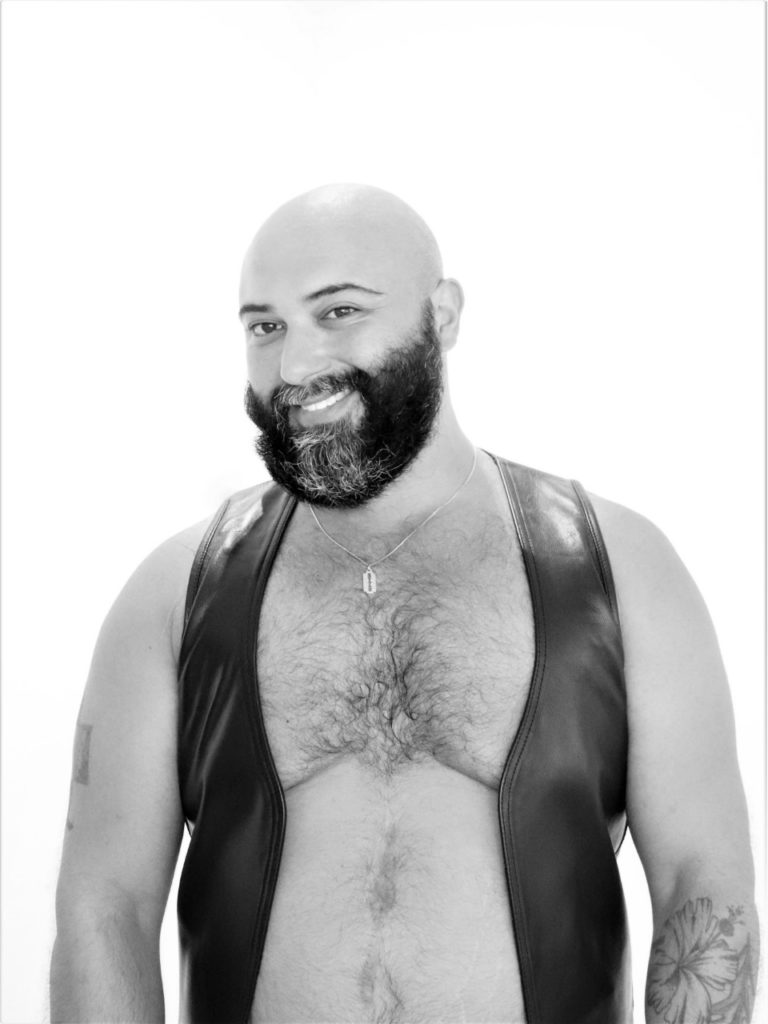 For those of you who don’t already know, I have the pleasure of working at the Mister B Amsterdam shop. I get to dress you all up in your best fetish and assist you in accessing your pleasures. For many of you, as soon as the gear gets on, the mind gets triggered. I can see the excitement in someone, feeling their body, covered in leather or rubber, staring at the hot creature in their reflection. And that’s great! But that’s not for everyone, of course. There are also many for whom this moment gets interrupted. Some of you feel differently about your bodies; often it’s your belly, or another part which you deem as not good enough. I know because you say it out loud, and I need to remind you; it’s all in your head.

You know when you’re chatting with someone and they explain that they need to go to the gym, while touching their belly? I’m quite sure you know what I’m talking about because you’ve probably also done it yourself. Ya, I said it: You’ve done it. And it’s such a common thing to say and do that we barely even notice it. While the fact of the matter is: one’s tummy size has very little to do with how often they work out, how ‘fit’ they are, and definitely not if they have gone to the gym this week or not. We know many people who gym regularly and do not have a flat stomach, like me. We also know many people with flat stomachs who have never even seen the inside of a gym, right? The one doesn’t necessarily have anything to do with the other. But what is true for all of us is that it’s really about what’s going on in our heads.

When we talk about needing to change our bodies in these ways we are essentially belittling ourselves. It can be either in or out of gear, in social settings, or just being friendly with each other and in all these cases not necessarily thinking about all the things that come out of our mouths. No, I’m not talking about the cock or ball-gag that falls out, but the language we use. And I think we should think about that.

Why do we use such irrelevant and toxic rhetoric when talking about our bodies? I believe it’s because of the ways we have been socialized to see our own and other people’s bodies as well as the notion we’ve been led to believe, of diet and exercise being tied to stomach size, and more importantly: body fat. It’s because of the ways we have been socialized to see body fat as something to be ashamed of and necessary to ‘work off’. Fat-shaming comes in all shapes and sizes, and a simple phrase like I have to work out more, serves as a very clear example of it. We should all know by now that the diet and exercise industries work very hard to make sure we believe their schemes. Lucky for me, I realized long ago that it’s all a big capitalist scam. They just want us to keep desiring to look like the models in the ads, and put the blame on ourselves if we don’t.

The problem is, these voices in our heads that try to tell us our bodies are bad or wrong, are just the byproduct of these industries, most media we’ve consumed, and dated ways of thinking of bodies and health. All that garbage has created little bullies in each of our heads. Every time we speak these words we are giving those little bullies ammunition. It can be an endless battle for many, and for some a losing one. The other problem with saying these things aloud is that we not only bring it into our realities, but also for those around us. This can leave others feeling bad about their bodies too, because it’s awoken their inner bullies, naturally. We all have them, it’s just a matter of how we deal with them. Over time, we learn to ignore them better and know that they aren’t real. But surely not everyone is there yet.

The point I’m trying to make here is that fetish is about pleasure, it’s about feeling good. So, when feeling good about ourselves gets interrupted by something as simple as a few of those simple words that make us feel bad about our bodies, then why not avoid saying them altogether? It’s really not that hard to do. It’s just a simple task of waiting a minute before self-deprecating; take a breath, let it pass and you will see how much more pleasurable it all can be. So the next time you get into new leather, rubber, or whatever gear turns your crank, know that any voice in your head that tells you that you need to change any part of your body, is wrong! Or if that voice happens to speak to you while you’re at the shop I’ll never hesitate to remind you of that.