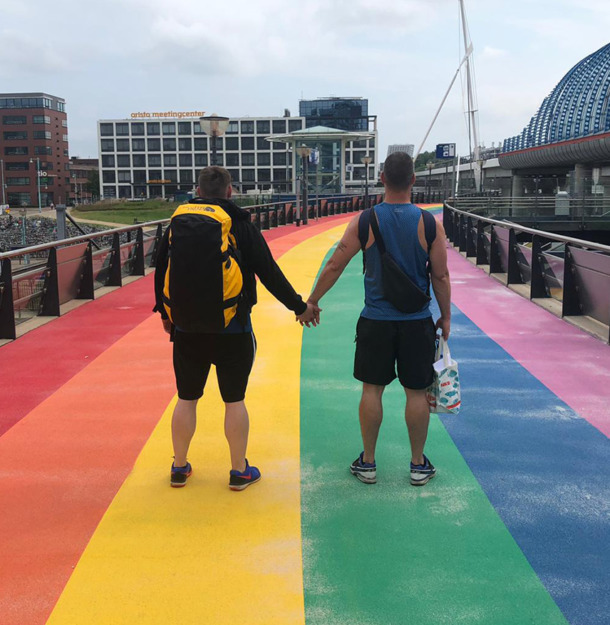 Last Saturday, I was walking down a huge rainbow path at Amsterdam Sloterdijk Station on my way to catch a tram. I passed this cis, white, straight boy, who was chatting to a friend, and I overheard him say (in a dismissive tone of voice): “Just putting a rainbow everywhere, doesn’t help anyone.” To which I immediately replied: “Well, I’m gay and I think you are wrong. It does help, and it’s called empowerment.”

I partially heard his response (“I agree with you guys…”), but I kept on walking, not in the mood to continue the conversation. Just half an hour earlier, I had been walking on the same path with my boyfriend, hand in hand. The painted rainbow on the pavement had made us smile and it kinda felt like a safe zone, so hearing this boy’s opinion really got to me. 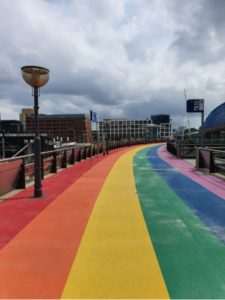 First of all, it’s not like you see a rainbow crossing at every street and on every corner. They are not ‘everywhere’; in Amsterdam, there are two at the moment, and apparently, your mind already can’t process seeing one. Second of all, as a straight man you are simply not in the position to judge what the rainbow – as a symbol – might mean to a queer person. For me personally, seeing a rainbow flag feels freeing and empowering. It’s a sign of visibility and a reminder that the world is not binary nor black and white, but diverse and colorful. And aside from all the symbolism, rainbows are fun and they break the monochrome urban landscape.

It’s Pride season, and like every year the importance of the rainbow flag is being discussed (online) a lot, especially within our own communities. In the last few years, the debate has mostly been about adding new colors to the existing flag, in support of marginalized people of color, trans individuals, and those living with HIV/AIDS. The Black Lives Matter movement and the pivotal involvement of black trans activists seem to have silenced those who are opposed to changing the original design. 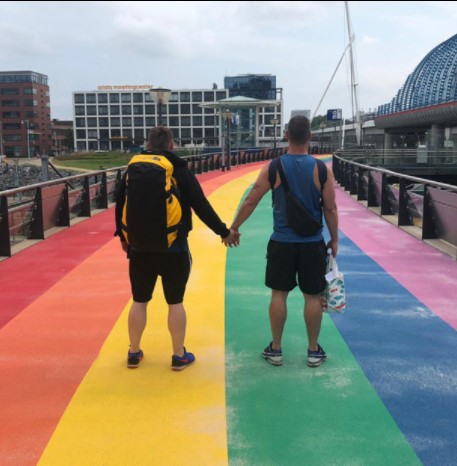 This year the discussion on social media has switched to (big) companies slapping a rainbow logo on their products during Pride season, and exposing the ones that never ever support any queer causes, and only do it to raise their profit margins. This, come to think of it, is an actual example of ‘a rainbow’ that probably doesn’t ‘help anyone’, which in turn brings me back to the boy that started this rant:

When a big streaming platform sells Pride-inspired merch to princesses of all ages and genders but doesn’t play its part in having more representation in its tv-shows and movies, then adding a rainbow doesn’t help our cause at all, I agree (with you) on that. But when your city puts a rainbow on the street of a busy commuter station, it does have value for a lot of people; it feels like support and solidarity from the community you live in. I have no issue with you voicing your opinion, but if you feel the need to say something about anything or anyone, then please make sure not to generalize ‘everything’ and choose the right words – especially when you are outside and all ‘the other people can hear you.

And maybe you meant super well! Maybe you are an ally!

Maybe you just wanted to tell me that Dutch politicians should outlaw gay conversion therapy for example, instead of painting rainbows on the pavement.

Maybe I should have stopped and listened to your response.

And maybe you really are a supporter of ‘us guys’ and our ‘monumental request for basic human rights, but to me, you just came across as privileged, without even knowing it yourself!

Marco Hohl is a Dutch/German journalist living in Amsterdam, whose chosen family includes his German fiancée, an Argentinean plus one, and a cuddly chubby cat. He’s into leather, toys, and music by Daði Freyr. Follow his adventures on Insta @hohlinone, where he has been documenting his day-to-day life for the last 7 years. #365daysofinstagram