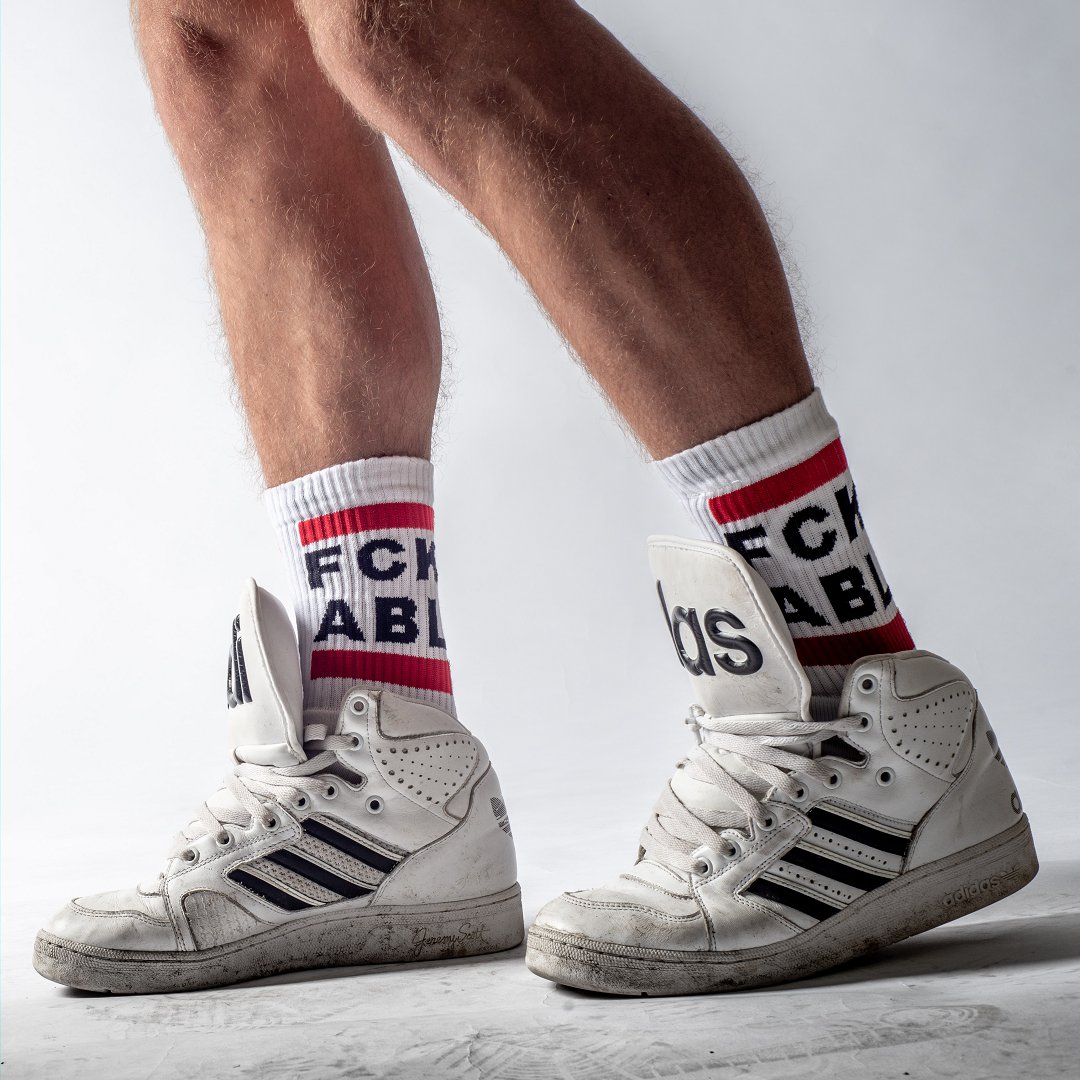 SOCKS AND SNEAKER FETISH FOR DUMMIES!

With expert Alex from:

Being relatively new to a lot of fetishes, I’m here to ask all the obvious questions so you don’t have to. When Mister B started to sell the iconic Sk8erboy socks (and other merch), the first thing that caught my eye was the different texts that decorated them. “Smell me”. “Fuck my socks off”, and the matching t-shirt with the text “SNFFR”. My personal experience with smells has been limited to getting wildly aroused by the smell of a manly armpit, but I’ve never actually thought about how I felt about socks. Or sneakers. Or feet in general. Oh, my beautiful innocence between fisting lube reviews is still very much alive! I could just clap my greasy little hands in joy. So it’s no secret that I’m sort of a geek, and my mind kept wondering if it was all connected… I knew about boot fetish of course, from my involvement with the leather scene, so why shouldn’t sneaks, shoes, socks and feet somehow be right in there in the mix? My curiosity was officially piqued, and I wanted to learn more. Being part of a brand that took its sexy sock-covered baby steps back in 1998, I deemed that Alex from Sk8erboy definitely was the right man to ask about sneakers, socks and smells.

Chris: Alex! Thanks for taking the time to meet with me. So I was super surprised that you guys have actually existed that long. Could you tell me a bit about the background for Sk8erboy

For the shoots they would always use Nike socks, and after a while he noticed that the durability and the quality of the socks weren’t really that good. After a lot of hard work and founding the company in 2002, some years later, the first Sk8erboy socks came on the market in 2004.

Today, we can pride ourselves by saying that we are probably one of the oldest and most famous fetish socks label in the world.

Chris: So, to ask a very basic question: What’s the turn on – for you personally perhaps – about the smell of socks? Could you take me through that experience?

Alex: For me personally it is the whole sensation of getting someone’s smell inside of you that becomes a turn on, and the smell itself almost becomes a drug. I’d even say that a good smell could be even more effective than poppers.

Chris: It sounds like this could be a healthy way for me to get rid of my poppers addiction… I’ve been checking your different social medias and websites, and as a word geek, of course I’m super interested in learning about some terminology that is specifically tied to the sneaker fetish scene. Give me some basics!

Alex: Just as in any other fetish, there is a way to distinguish between receiver and the giver, sort of say. When talking about socks, sneaks and smells, the term often used is “Sniffer” and “Smeller”: the sniffer being the one who sniffs (say, the sub) and the smeller being the one giving the smell (or, the dom). 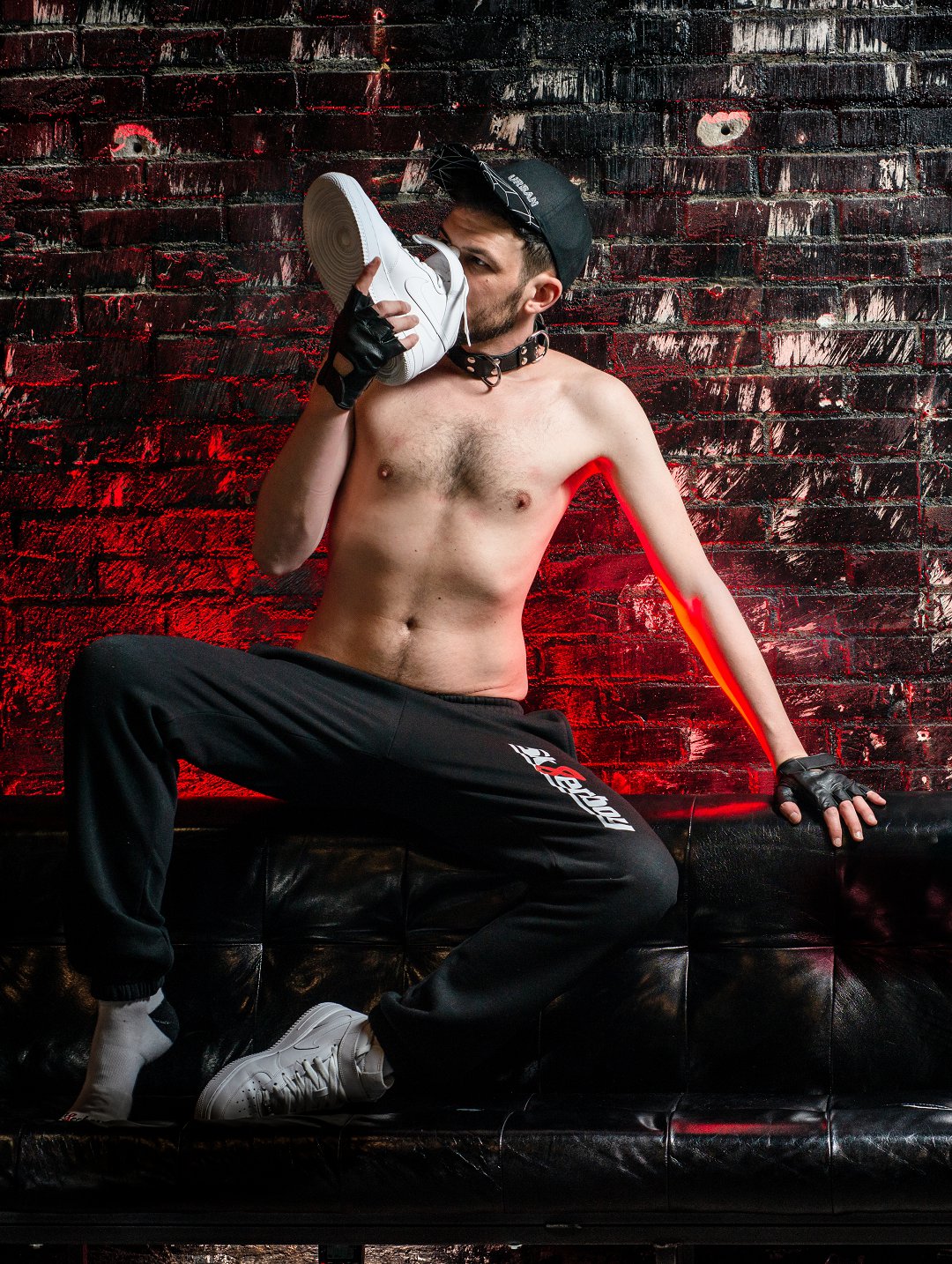 Dictionary:
Chav
British slang
A young person in Britain of a type stereotypically known for engaging in aggressively loutish behavior especially when in groups and for wearing flashy jewelry and athletic casual clothing (such as tracksuits and baseball caps)
(Credit to www.merriam-webster.com)

Scally
Abbreviation of “scallywag”
From the 1980s – (in the north-west of England, especially Liverpool) a roguish self-assured young person, typically a man, who is boisterous, disruptive, or irresponsible.
(oxforddictionaries.com)

What’s The Word:
Sneaker-fetishism doesn’t have a term on its own, but one could say it’s related to shoe fetishism – dubbed ‘Retifism’.

Chris: Oh my, now I suddenly understand the sentiment behind your SNFFR t-shirt. I want one. Speaking of clothing, I saw your flyer for the Sk8erboy Party in Cologne and Karlsruhe, and looking at the dresscodes, there were a lot of new sub-categories to the overall “sportswear” that I admittedly would have to look up to fully comprehend. But why ask Google when I can ask you?

Alex: Of course! Some of these things can be very differently interpreted, as the way you project your look doesn’t necessarily fit into one specific term. To make things easier, we could talk about trends. On the UK-based trends you have “Proll”, which comes from the “Proletarian”, basically a low-class rascal, and a “Chav” which contains the same notion but much more loud, rude with an explicit fuck-you attitude. Then you have the trend to stuff your pants in your socks, which has roots in the French scene and is connected to the term “Scally”, that has somewhat the same connotations as the ones mentioned before.

It’s important to note that despite all these descriptions sounding derogatory, it’s exactly that energy or look that is a turn on, making it a fetish. So it’s definitely something positive in this context. Also, the terms often blend into each other.

Then there are some more obvious dresscodes as Sagger (baggy pants), Trackies (tracksuits), Emo, Soccer, Biker… The list can go on.

Chris: I’ve always said that being gay should come with a handbook… Thanks for giving me a 101 on this; it has definitely made me understand this scene a little more. So, what’s next for Sk8erboy?

Alex: After some years of light hibernation, we are working hard to bring the Sk8erboy brand back in the minds of Europe’s fetish scene, by being active in the community and delivering high quality sportswear products. We want to be the first and last thing anyone will think about when sportswear and socks is brought up in conversation. With the brand already being popular in large parts of Europe (and beyond), it’s definitely looking bright. 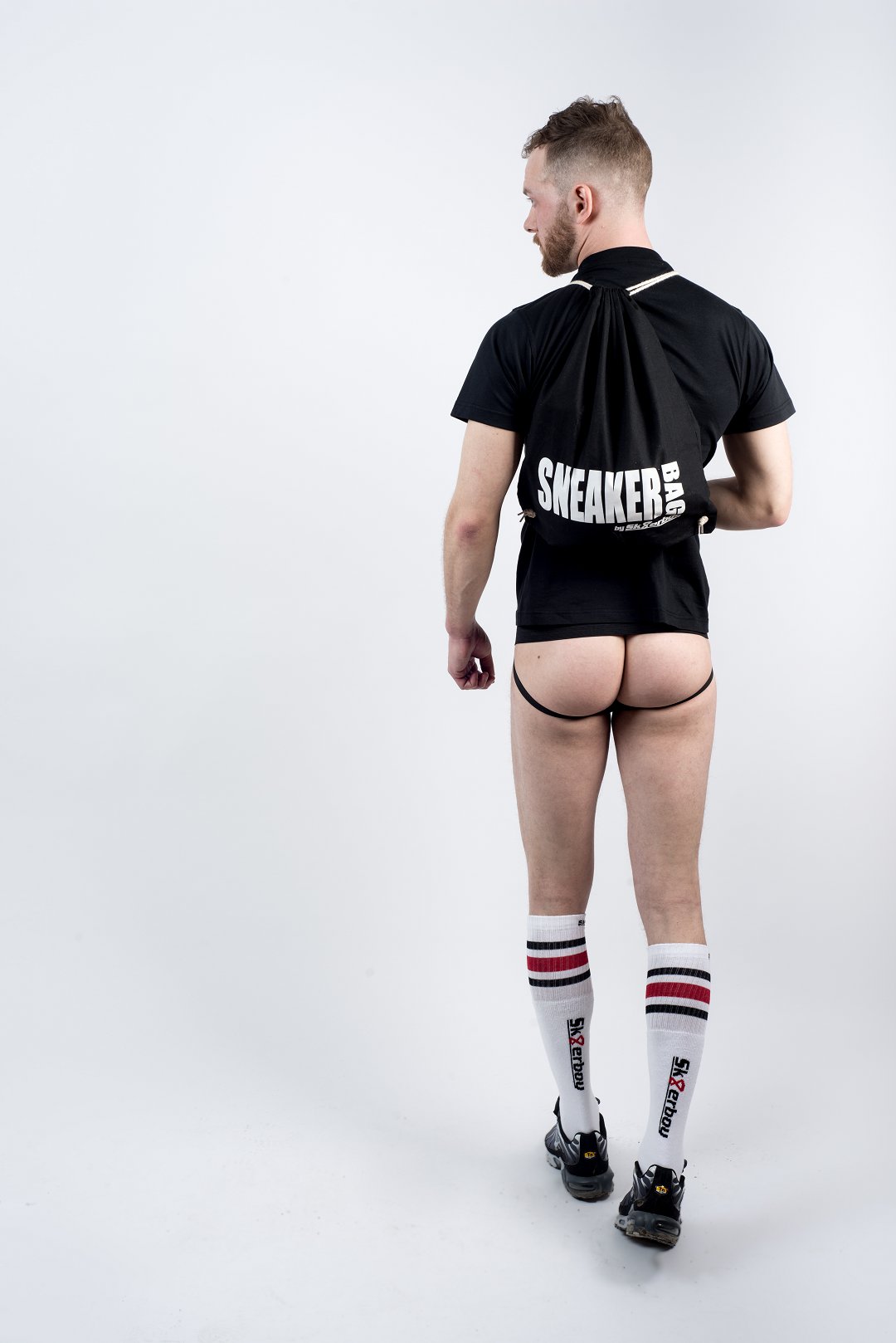