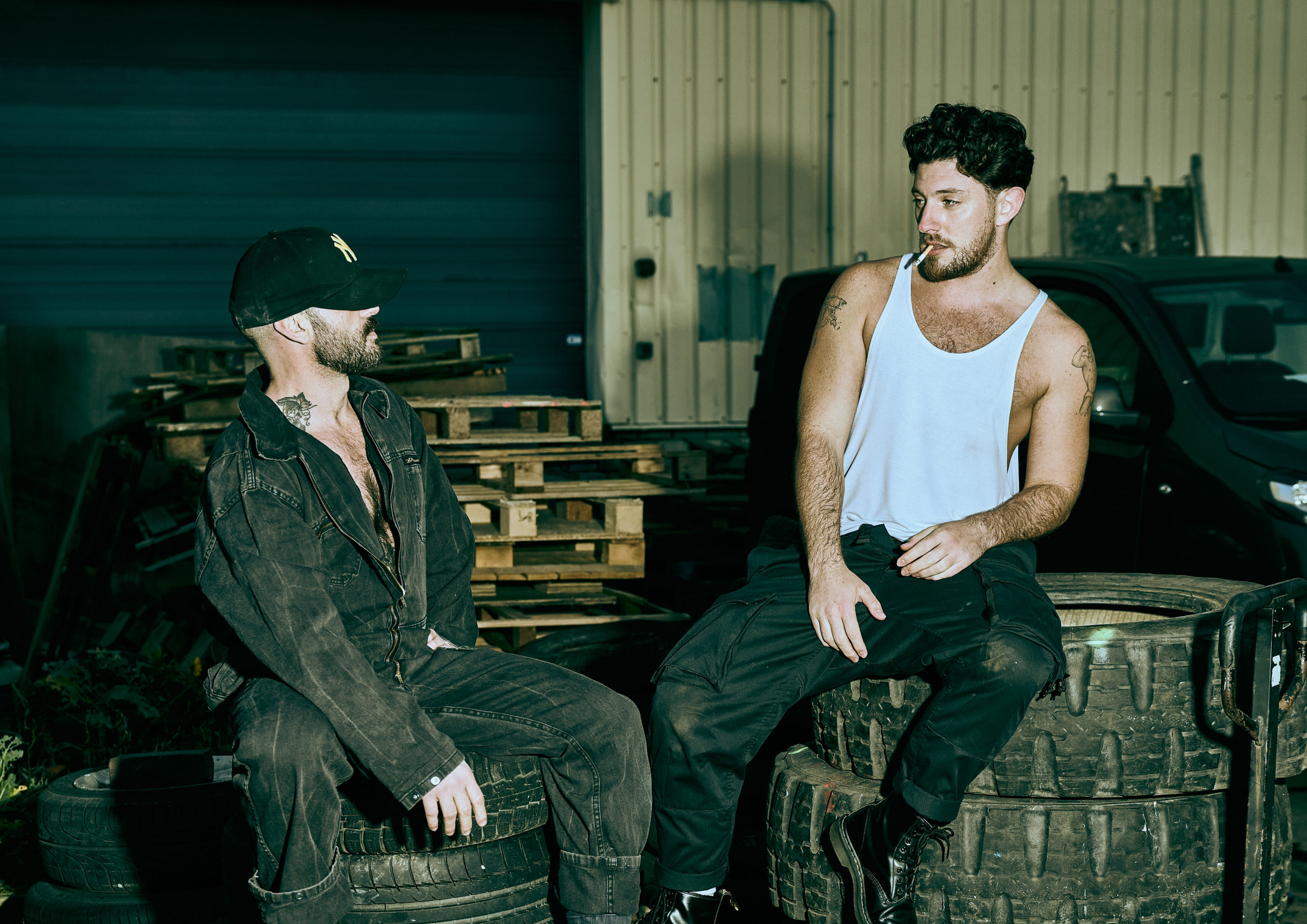 Had I been staring for too long? I was aware I was doing it, and if I was aware, who else had copped on? I shifted my gaze away, to the Styrofoam cup in my hands; stained by the coffee I’d drank and chipped around the brim from the nervous fidgeting I’d been doing since I arrived. I was halfway along my cross-country trip through the south of Spain, when my car broke down outside the little town of Jaen, earlier today. It was a sweltering hot afternoon – the kind I had planned to spend by the sea, with fresh air and cool water. Instead, I found myself stuck in a car-repair garage, beads of sweat dripping down my forehead and down my back, with only the occasional breeze from the ventilator to cool me down. The only thing making this situation any better was the view I’d been staring at since I arrived. 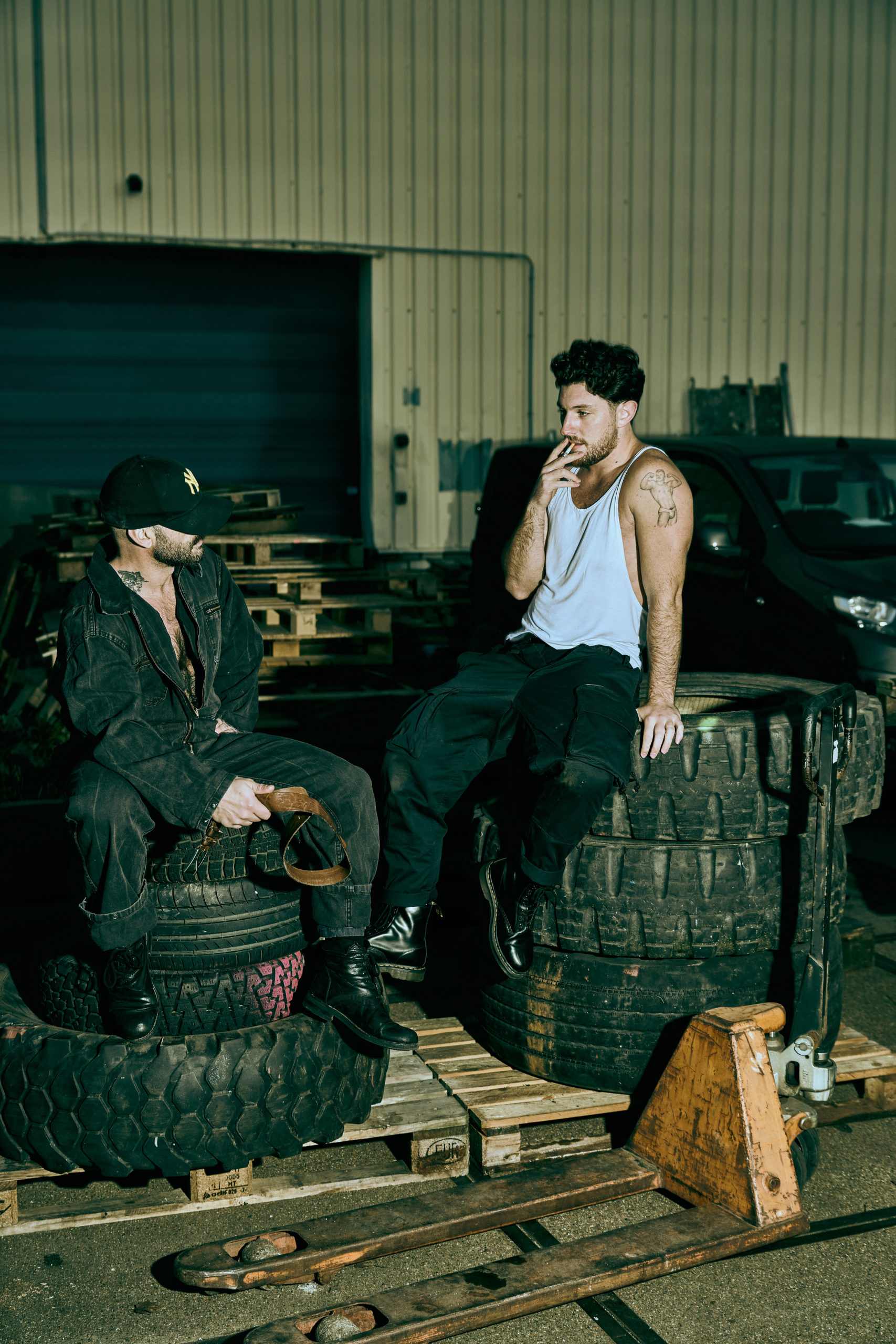 The car mechanic, Jābir. He was tall (must have been around 1.90), and boy, was he beefy! His boiler-suit uniform was zipped down to his waist, revealing his broad shoulders and stocky arms, covered in tattoos. His muscular hairy chest and tight wife-beater were covered in dirty sweat and car grease, and his tool belt was nestled to the side on his hip – which meant his bulge was on full display from where I sat. I tried to remind myself not to stare, but I couldn’t help it. 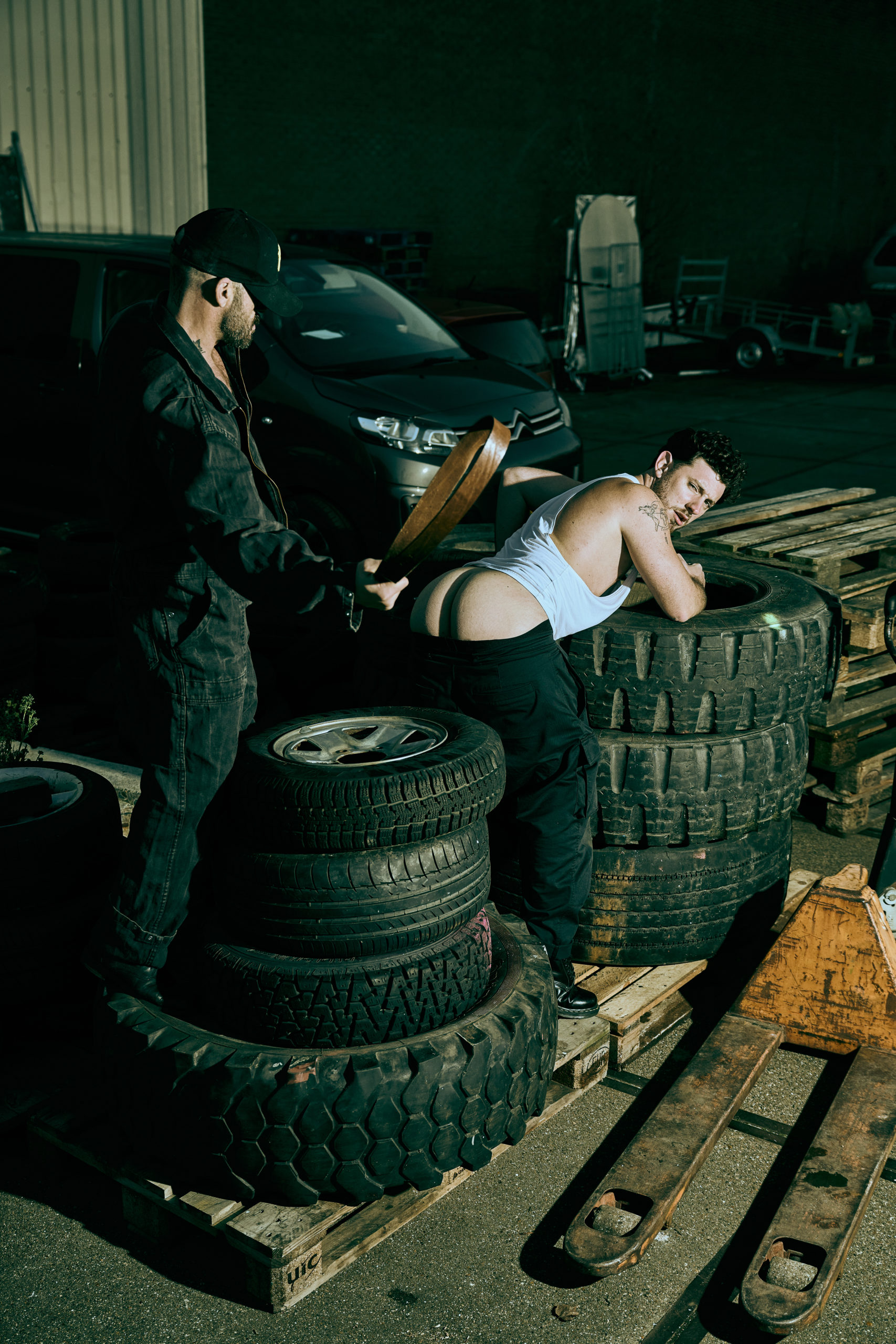 “He’s probably straight,” I told myself – that didn’t help. “He’s definitely married! Look at his wedding ring,” I told myself – but that didn’t help either. No matter how hard I tried to behave, my gaze would involuntarily end back on him. ‘I have to do something about this’, I thought to myself, so I quietly got up and went to the toilet, locking the door behind me. I unzipped my pants, pulled out my hard cock and started to jerk off furiously. Up and down I went; my stiff dick firm within my grip. I was so close, I was so close, I was sooo… and just as I was about to explode, a loud abrupt knocking at the door interrupted me. 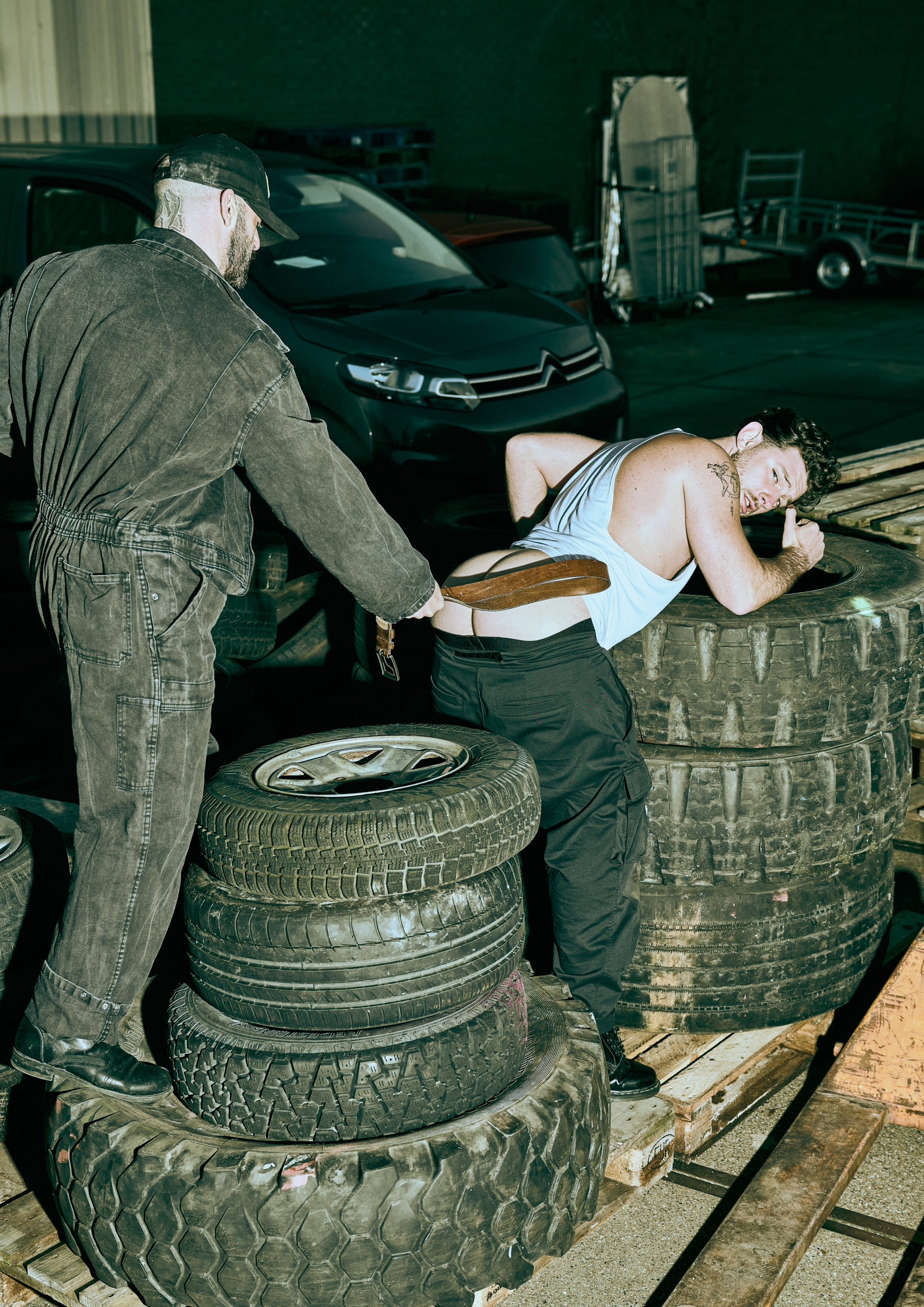 I frantically shoved my dick back in my pre-cum stained briefs and pulled my pants back up. “Who is it?” I said feebly. “It’s Jābir. I’ve been working on your car,” called out a deep low voice with a rich Hispanic accent. “We’re closing for the day, so your car is going to have to stay in the garage overnight. We should be able to get you up and running first thing tomorrow.” When I came out, I looked around sheepishly and, to my dismay, the place was indeed closing. Jābir’s colleague was punching out for the day, and the garage door had already been shut halfway – leaving me and the mechanic totally alone. “What were you doing in there?” he asked demandingly, as he leaned against the hood of my car, his arms crossed. His authoritative tone caught me by surprise and an “Excuse me?” was all I could manage to muster as a response. “I was peeing,” I continued as he started walking towards me. “Oh yeah? 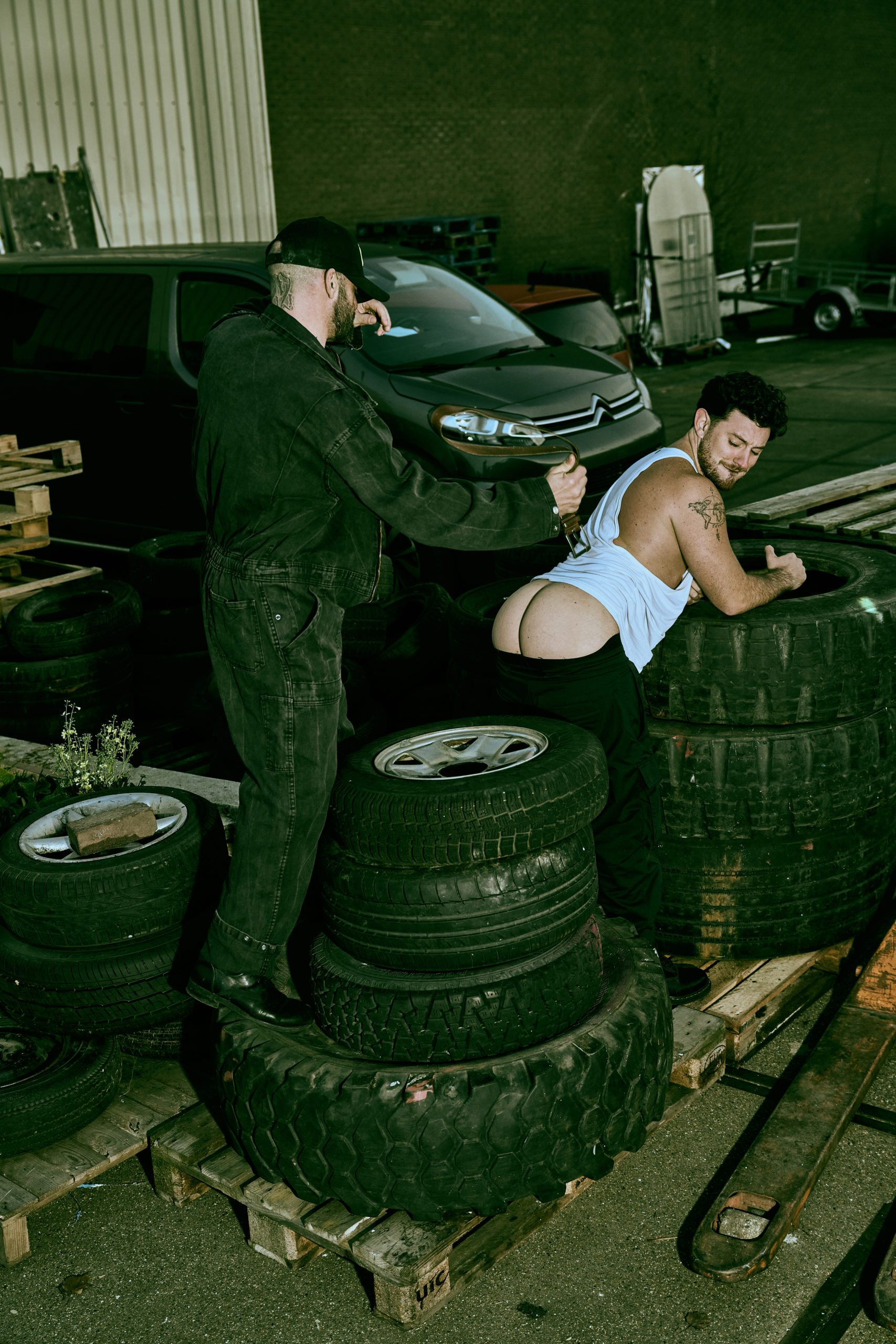 Then how come your cock is hard?”… Fuck! Fuck! Fuck! He had noticed!
I instantly blushed bright red and was halfway through stammering an apology when I felt his big hands grab me by the throat and throw me against the car. “You’re pathetic. Shut up faggot” he ordered. An overwhelming rush of adrenaline ran through my body, as he yanked my trousers down to my ankles in one swift movement; leaving my bare ass exposed and my cock and balls pressed against the hot metal of the car bonnet. My mind was running at a million miles per hour.

I was afraid and then excited… and then afraid again as I heard him tug out the belt from my trousers. ‘I should stop this whilst I can’  I kept thinking to myself, but my body refused to co-operate. And then ‘THWACK’, went the belt across my bare cheeks. My whole body clenched. “FUCK!!!” I cried out. “That’s for lusting after a married man, boy. You should know better,” he said as he shoved his dirty handkerchief in my face – smothering me so I couldn’t breathe and intoxicating me with the pungent smell of his sweat and gasoline. My eyes rolled back into my head, and my body went limp – all except my dick, which was harder than ever. ‘THWACK’ went the belt again and again – but now all I could feel was a hot tingling sensation and a sense of pleasure from surrendering to him, that only got more intense with each stinging lick of the belt. 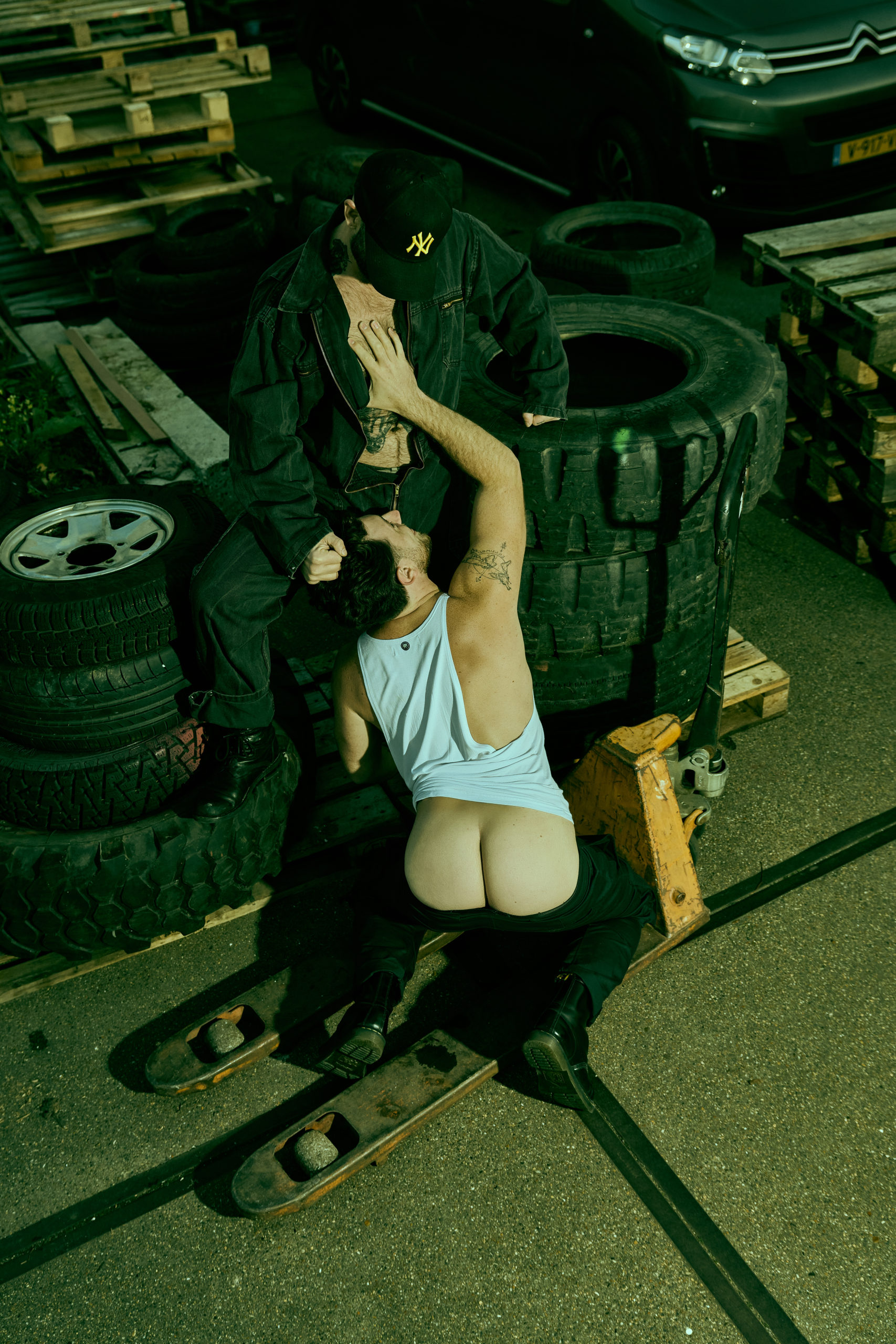 “Now you’re going to find out how it feels to serve a real man,” he laughed menacingly. Spreading my red cheeks apart with his hands, he spat a thick wad on my hole. “Thank you, sir,” I moaned uncontrollably, arching my back just a little as to say ‘please don’t stop’. Not that he would have, had I wanted him too.

He stood up and pushed his girthy, veiny meat inside me – ripping my tight hole apart. I tried to reach behind me and pull him out a bit, but he just slapped my hands away and shoved it in further  – hurting me to make his point. I bit my lip, and gave in; letting him tear his way through me, harder and deeper with each thrust. His heavy balls were swinging and hitting against mine every time he furiously slammed his cock into my yearning hole. “Now beg me to breed you, pussy!” he ordered. I immediately obeyed and started pleading “Please breed me, sir,” over and over again, like the bitch he’d degraded me to be.I could feel his dick pulsating, getting faster and faster. Then with a low guttural groan, he shot his thick and creamy load deep inside me – flooding me with warm gushes of his manhood. Pulling his dick out and dressing up as if nothing had happened; he left me bent over my car, sweating and shaking, with my red-bruised ass slowly leaking his cum…

“Now get out. We’re closed!” he said, as he turned his back to me and walked away.