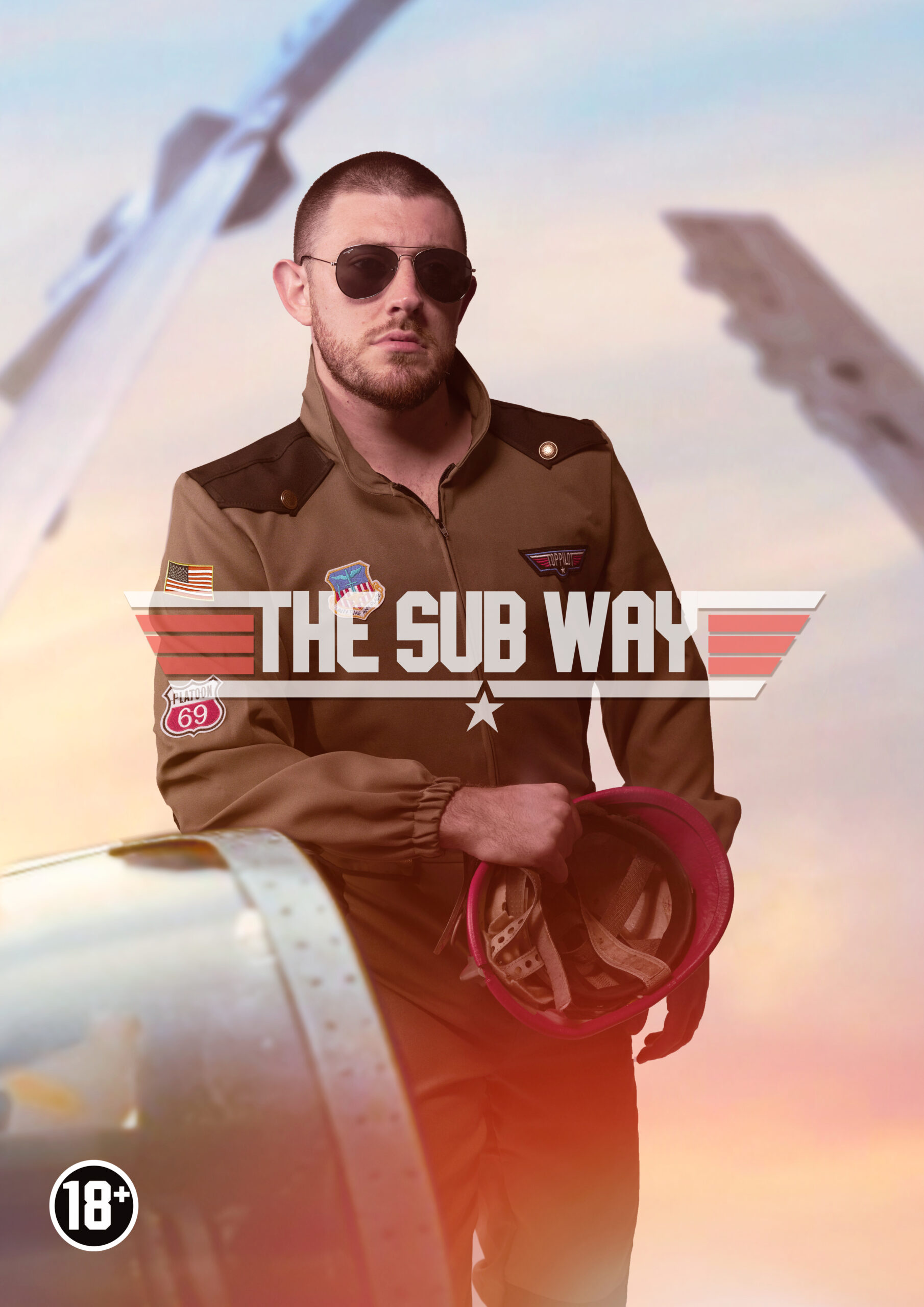 The year was 1986. The United States Navy had recruited some of the most skilled pilots in the world to learn the lost art of ariel combat. These were men who had graduated top of their class. But the living quarters at the Marine Corps Air Station were anything but prestigious. Rows of metal beds lined each side of the dorm, and any space in between was occupied with the pilots’ bags and memorabilia: souvenirs from travels abroad and faded photos of their girlfriends back home. The communal showers and locker rooms were just down the hall, where the men would gather each evening to wash off the sweat and grime of target training and boast about who’d flown best that day.

Lt. Penn “Mustang” Marshall had no problem fitting in with the locker room antics. He never was concerned with being a straight-A student. But despite never following orders, he had built an impressive track record in the sky, garnering him a stellar reputation. A reputation for having great balls of fire that no one could match. That was, until arriving at the Navy’s Fighter Weapons School and meeting Lt. Todrick “Big-Bird” Kazakov: a by-the-book people’s favorite who was every bit as cocky as Mustang and not the kind to back down from a challenge. 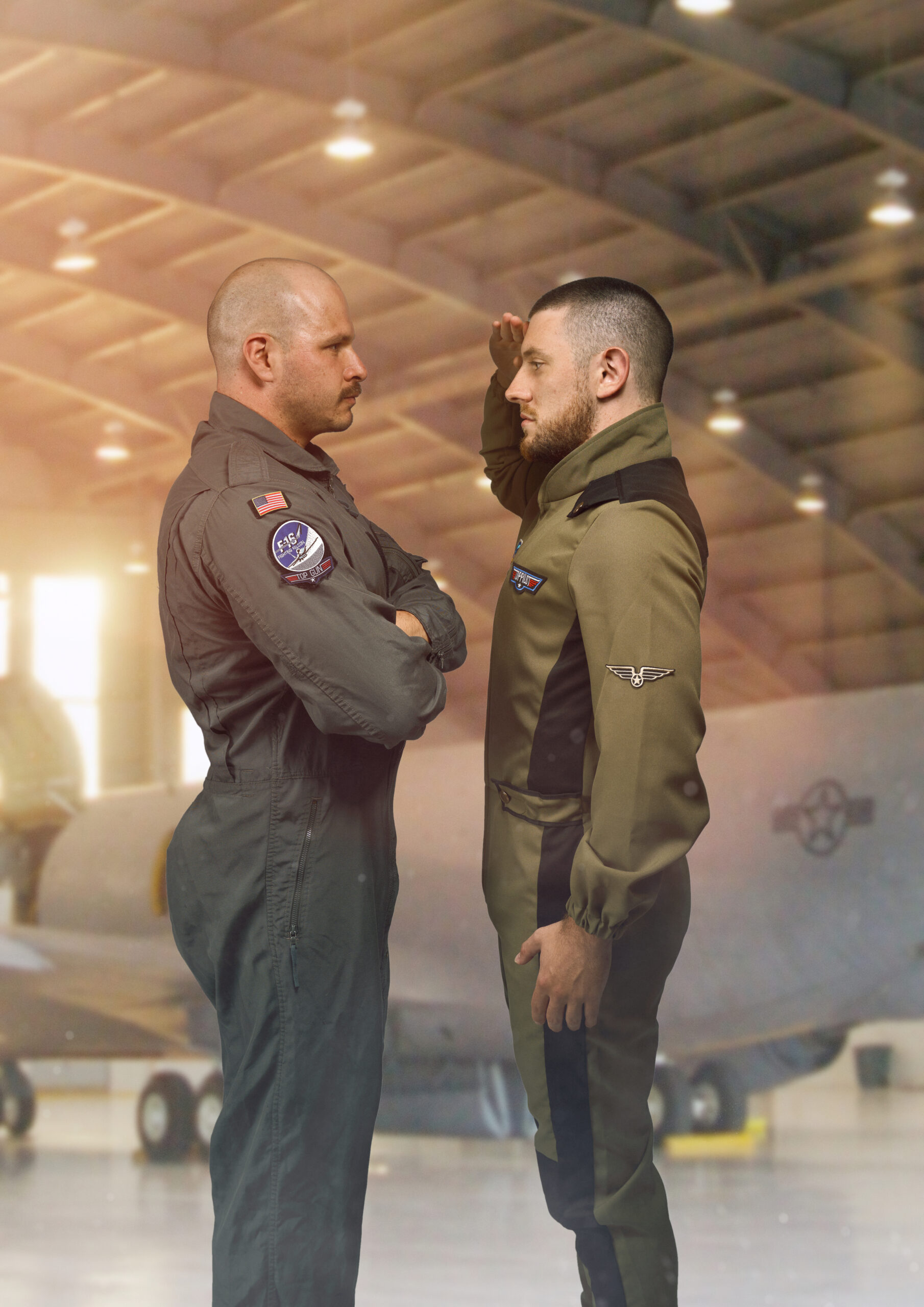 The tension between them was palpable. An intoxicating mix of loathing and jealousy, but deep beneath bubbled a burning passion that confused them both as much as it intrigued them. Behind every glare, there was a stolen look of desire, and behind every defiant stand-off there was a longing to reach over and rip each other’s clothes off. After eight weeks of intense flight training, the Vice Admiral came to the base to congratulate Big-Bird and Mustang. He announced that by the end of the month, the Navy would be assigning one of them as Captain to lead the other pilots in their first mission: a position the pilots have come to call the Top Bunk. 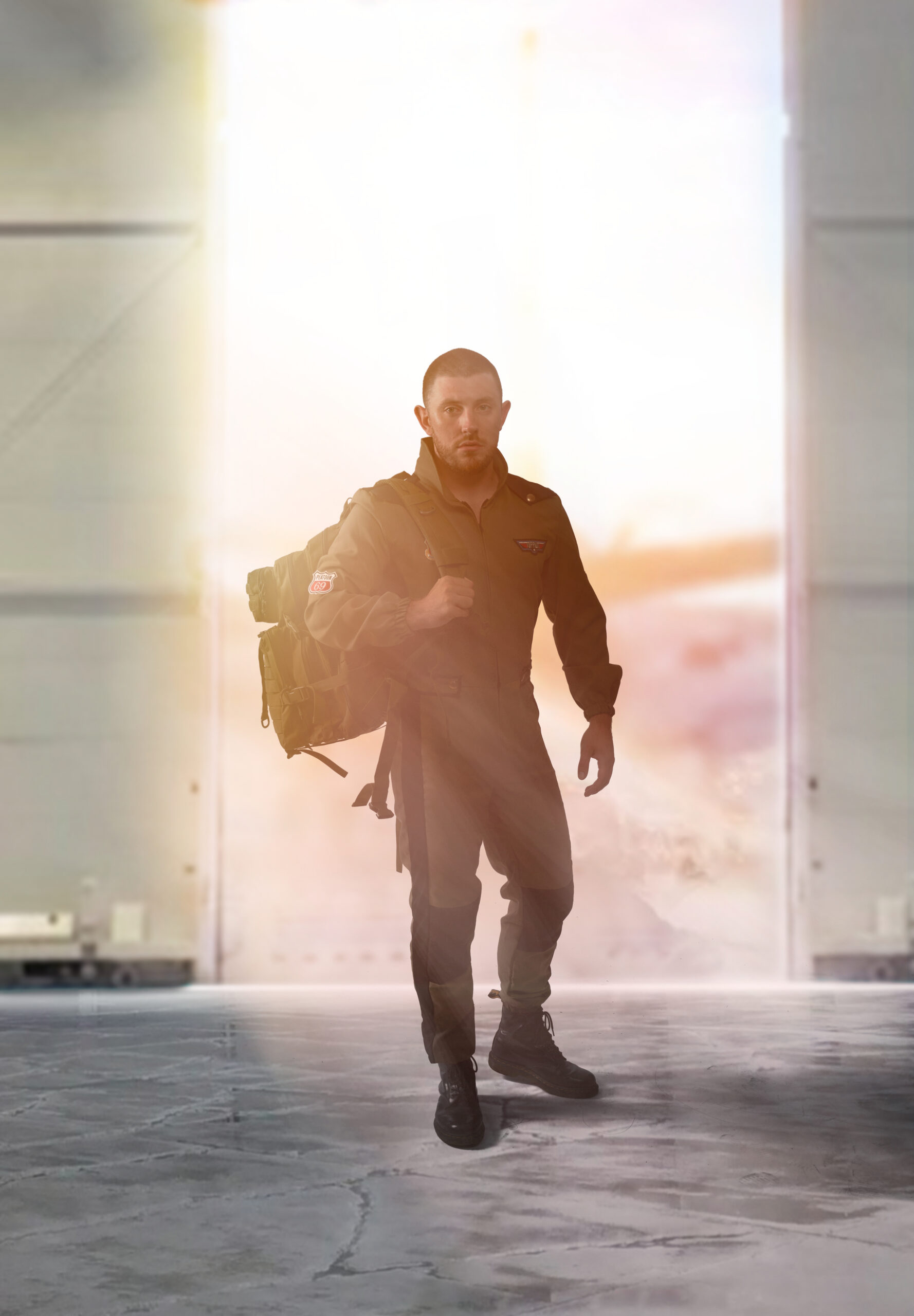 The Vice Admiral’s announcement turned up the rivalry to a breaking point. And with it, the heat. The undeniable longing. The frustrated passion, begging for release. One evening, the pilots snuck out to the local bar to celebrate the end of their training. Mustang and Big-Bird however, who were both too focused on the promise of a promotion, were left alone at the base. After parking his F-14 Tomcat in the hangar, Mustang made his way back to the dorms. As he passed the showers, he heard the sound of water running. Looking around him to confirm they were indeed alone, he quietly opened the door until only just ajar. It was there, from his hidden vantage point, that Mustang could secretly admire his rival. 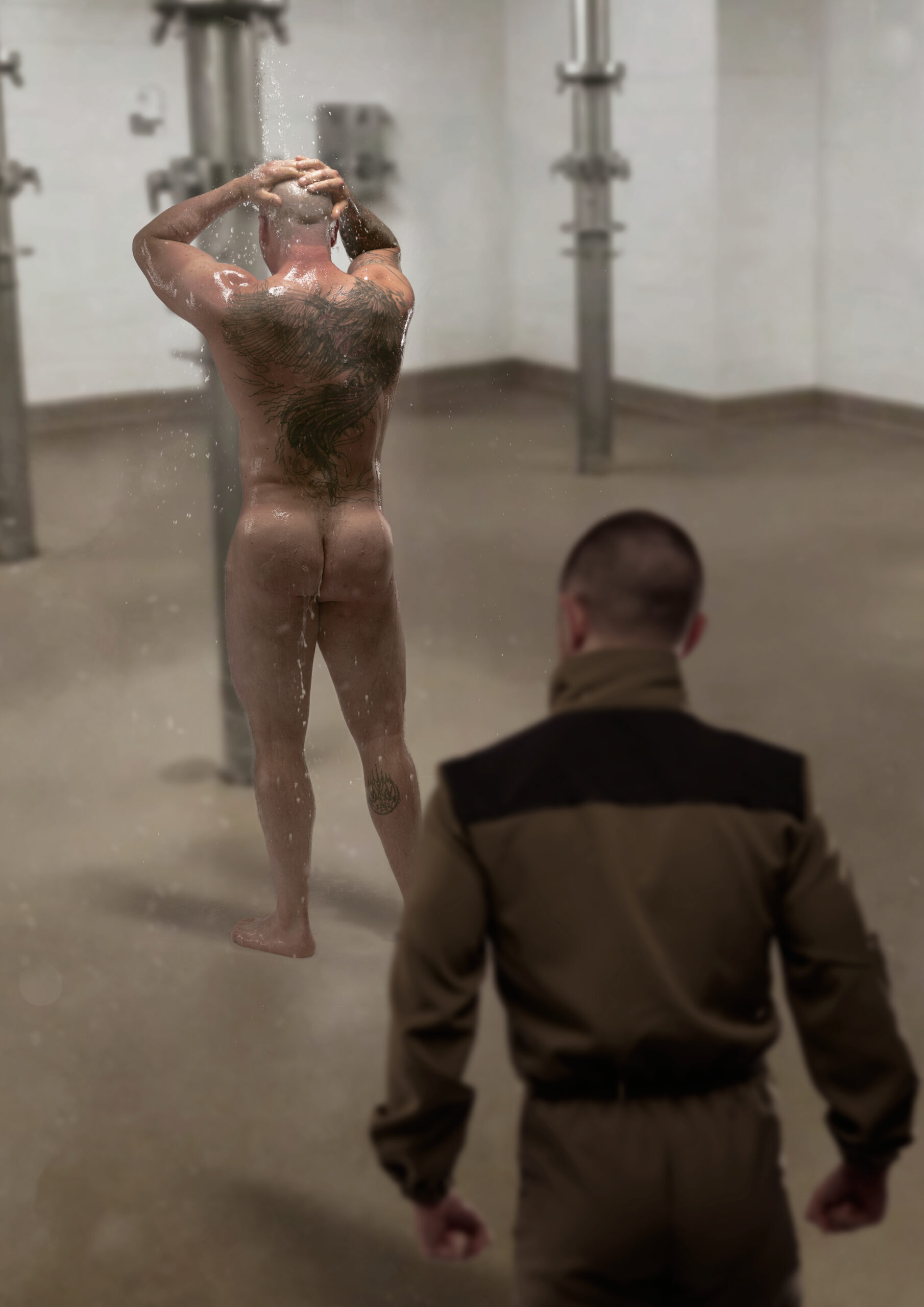 His broad lats and quarterback shoulders framed his figure, which looked toned and tight from every angle. Everything else seemed to fade out of sight, as he watched Big-Bird’s hands lathering the soap and meticulously massaging it over each of his bulging muscles: from his pecs all the way down to his thick calves. Mustang was hypnotized by the stream of water cascading over Big-Bird’s head, trickling down his abs and tracing the full length of his hung cock, where it would drip off the foreskin onto the shower floor below. As he looked on, he wished he could be there on his knees to catch each drip in his mouth, quenching his insatiable thirst. 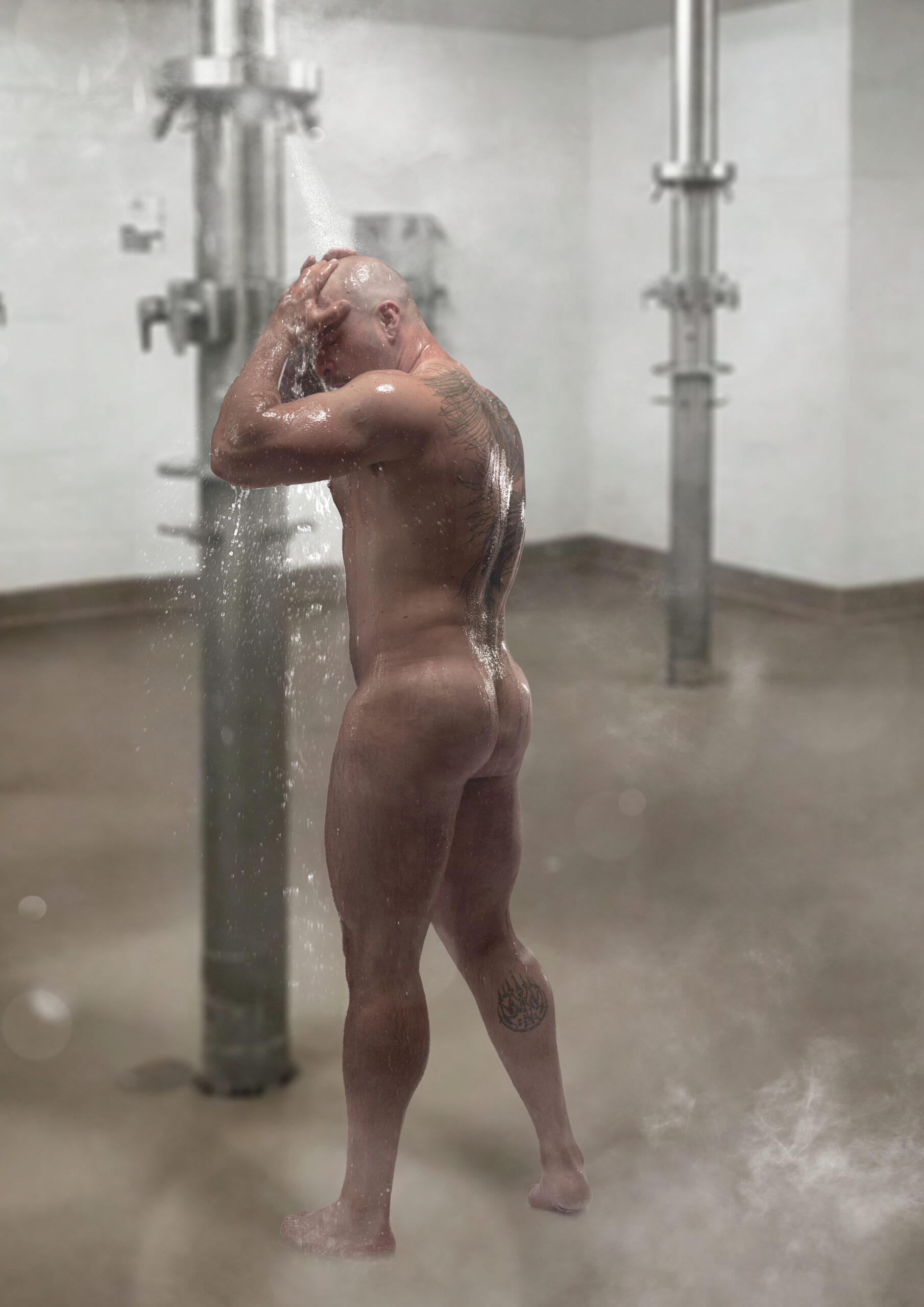 However, his lustful entrancement ended abruptly when Big-Bird’s voice penetrated the quiet. “I can feel you staring. Why are you here, Mustang?” Knowing his cover had been blown, he kicked open the door. “I came here to settle the score on this bullshit once and for all,” he shouted as he marched right up to Big-Bird, stopping just inches behind him. His clothes were getting drenched, but he didn’t care. All his attention was directed on Big-Bird – the root of all these conflicting feelings. “Well, then I guess there’s only one way to settle this,” Big-Bird snapped back as he swiftly spun to face Mustang and shoved him back against the wall. “Fight me asshole. The winner gets to be captain, and the loser must submit,” he said, whispering it this time in Mustang’s ear. And with that declaration of war, the boys tackled each other to the ground. As they wrestled, morphing from one position to the next, Mustang’s uniform started to come undone until he too was left bare and exposed in the grip of his contester. 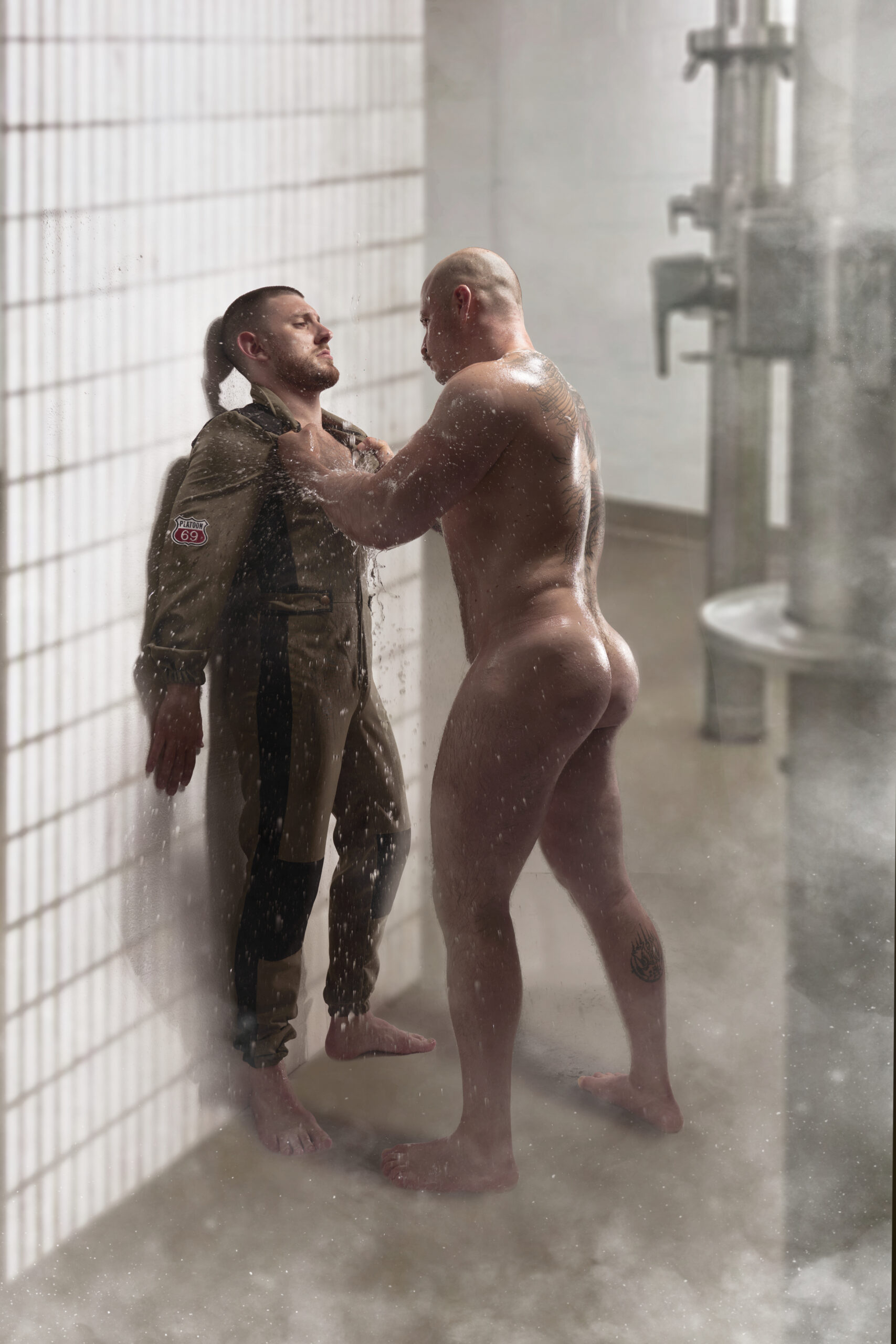 Their eyes were locked the whole time as if trying to read each other’s minds and decipher their next move. They could smell each other’s sweat as faces got buried into armpits and heads were locked between thighs. They could hear each other’s heavy breathing as they exerted their power over one another and the guttural grunts that followed suit. They could feel each other’s heightened heartbeat, sending pulses of blood to their muscles which clung to every inch of each other’s naked bodies. It was an all-consuming sensory overload. And what began as a fight quickly transcended into an intricate demonstration of both dominance and desire. 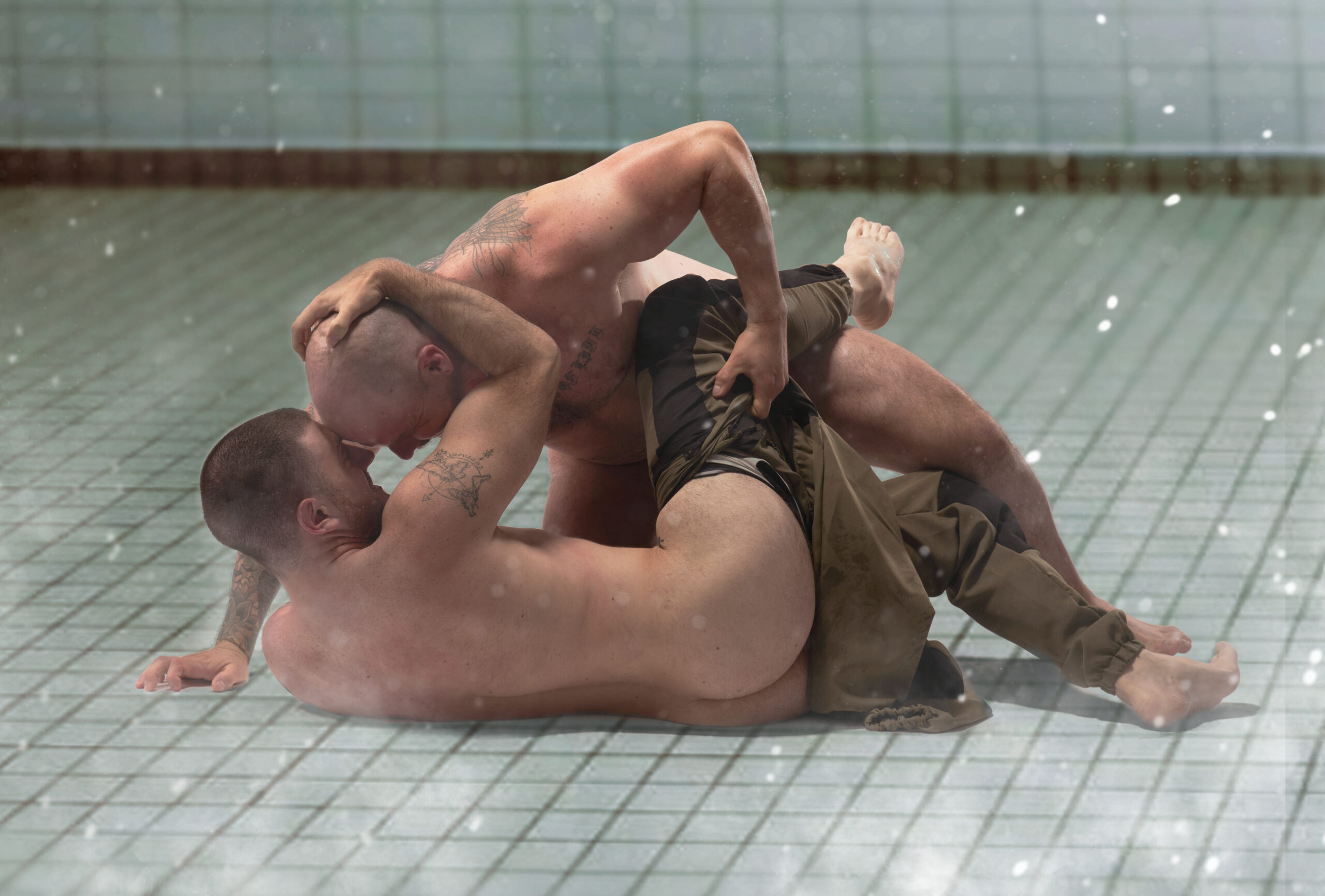 Whilst Mustang gave a good match, it was something as tender as a kiss that ultimately caused him to throw in the towel. Big-Bird had Mustang pinned down to the slippery tiled floor by mounting himself on top. Keeping one hand grasping at Mustang’s balls and the other wrapped around his neck, he leaned in to kiss him. Slow and hesitant at first but picking up the pace until ferociously their mouths moved in tandem: molding and opening to one another, exchanging their spit and allowing their tongues to explore every corner inside. It was in that moment of weakness that Mustang gave in and let his body sink further into the floor, finding pleasure and arousal from being helpless under the weight of his opponent. 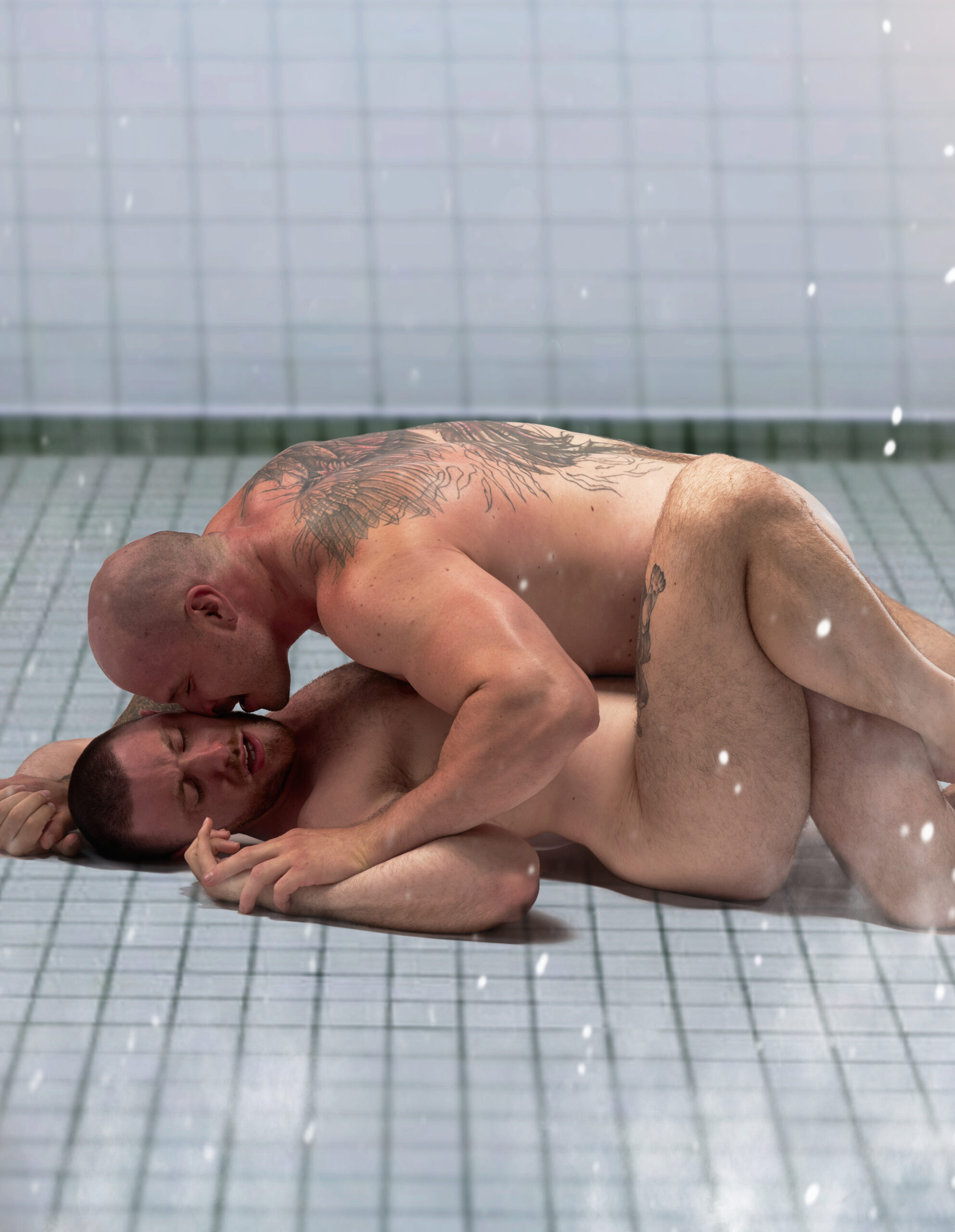 After ten long lingering seconds went by without any pushback from Mustang, Big-Bird’s victory was official. As he pulled away from the kiss, he let out a smug triumphant grin. “Time’s up Mustang. Looks like I’m going to be your Top Bunk and you’d better be ready to submit… starting now!”

Find more stories of The Sub Way below