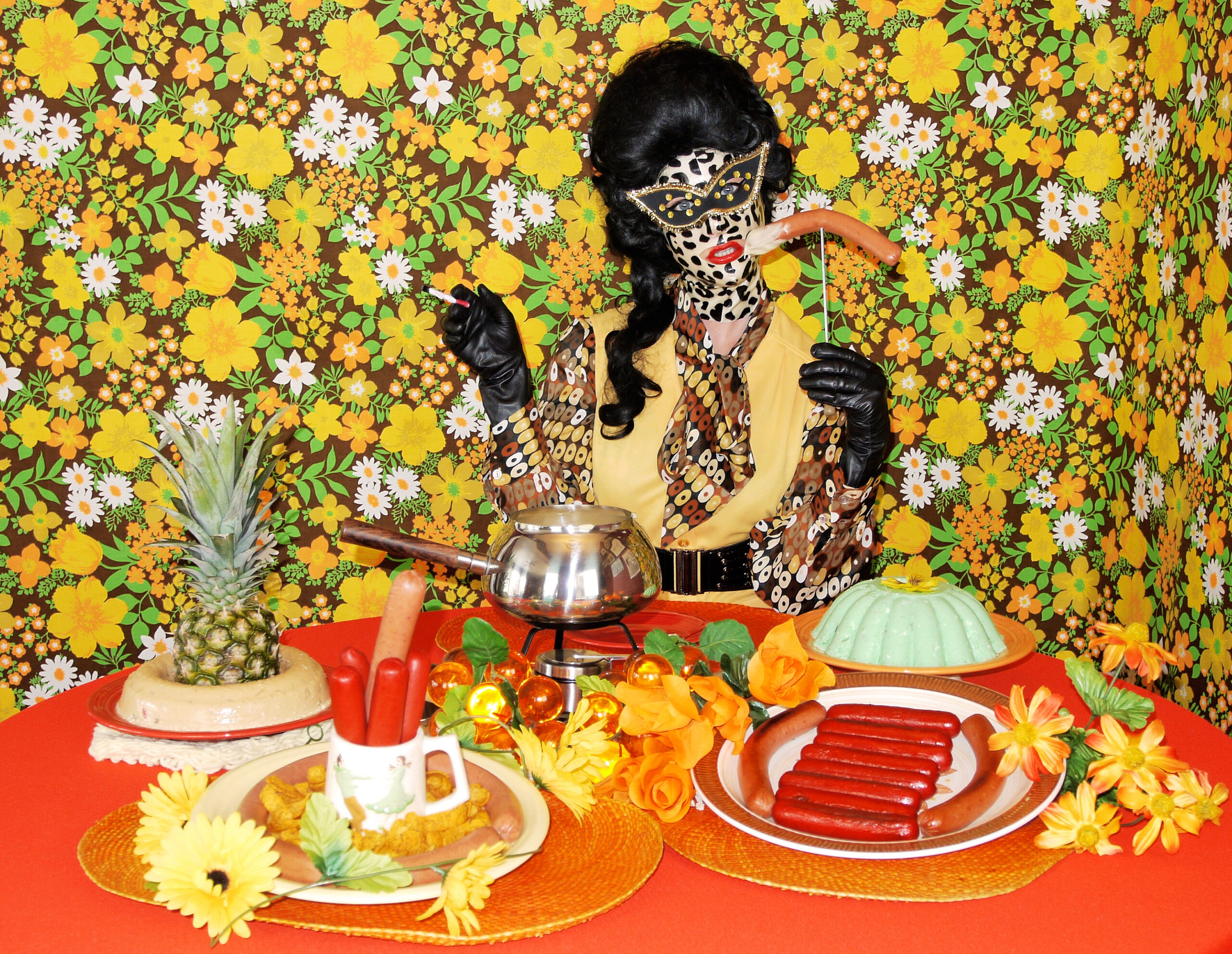 The words:” I am my own work of art, I am my own creation”, can easily apply to Miss Meatface, her pictures are slightly satirical, sometimes even caricatural but contain a serious undertone and sometimes even a cynical message. She is able to magnify gender roles and stereotypes in an absurd, yet always endearing and charming way.

Miss Meatface could easily be your next-door neighbour, waving to you through her kitchen window, while wearing a latex hood and apron, her servant right beside her, obediently on his knees, apple pie in the oven. Or could she?

Can you tell me a little bit about yourself and your artistic background?

I grew up in Northern California with two artistically inclined parents that supported my interest in the arts. My father is a photographer so I grew up surrounded by the photographic medium. He bought me my first camera and my love affair with photography grew out of that. I attended the California College of the Arts and the Kansas City Art Institute where I received a BFA in textile design in 2005. I’ve done everything from singing in a band, and working as a librarian, to textile printing and design…but throughout all of that, I always held a deep passion for photography.

Is there a difference between Kat Toronto and Miss Meatface?

When and how was Miss Meatface created, can we consider her your alter ego? And is there a particular reason you chose this name?

I consider Miss Meatface to be my alter ego, she came into being around mid-2014. This was a year after I’d undergone a total hysterectomy after finding out that I had a rare form of cervical cancer at the age of 29. I was also in an incredibly unhappy relationship at the time and so I began taking self-portraits that reflected how I felt inside: emotionally battered and bruised. I took up the art of special effects makeup and gave myself bloody gaping wounds on my face, black eyes, and bloody noses and used all of the outward signs of domestic violence in order to make a visual statement about how I felt on the inside. It was at this point that I came up with the name Miss Meatface.

Some say that art needs a breeding ground for suffering or grief, what do you think about this?

As someone that has experienced huge artistic growth during a time of suffering and grief, I can definitely see the truth in that statement. I also think that art can come out of periods of joyful elation and happiness as well. Art seems to abound when there is an emotional extreme of one kind or another going on in a person’s life.

What do you think of the part of women in fetish art?

From my own observations, I feel that women play a much larger role in the world of fetish art today than previously, which is an incredibly exciting thing to see take place. There needs to be more women in the fetish art community and I think moving forward into the future there will be!

BDSM and Fetish have consistently played a large role in my artwork and in my personal life. Back in 2014 when Miss Meatface first began to evolve I felt drawn to the BDSM/fetish aesthetic because through the masks and attire I was able to take away my own identity as a woman and become a blank canvas, or in some cases, turn myself into a doll. I was able to transcend the black and white world of male/female and become an object. It was this concept that piqued my interest and made me want to explore these ideas further through my Miss Meatface persona. I found that the more I delved into Miss Meatface, the more I actually got to know about myself as Kat Toronto and about my own sexuality and feelings about being a woman in a society that places so much emphasis on physical beauty, having children, etc.

And, if yes, do you like to attend fetish events?
– Is there a difference between the European scene and the American one?

I used to attend fetish events much more than I do now, mostly due to the Covid-19 situation over the past two years. The UK and European scene could be seen as more well established than the US scene, but with that said the US scene is quickly catching up! I’ve attended Torture Garden events in NYC in 2019 and am very much looking forward to attending Torture Garden Los Angeles in the near future.

What role do femininity and gender in general play in your art?

I love playing with stereotypical gender roles and the push and pull of dominance and submission in relationships. In my Meatface work, I prefer to make social and/or political commentaries in a playful, lighthearted way whilst also hopefully sparking questions and conversations inside of people that lead them to ask larger questions of themselves and society as a whole. Simply by doing what I do – by challenging gender stereotypes and our views on sexuality – I hope that maybe I can help make a positive change.

How do you prefer to be considered? An artist or a performer?

I describe my work as “photographic performative self-portraiture” so I feel like I am both, I view each Miss Meatface photoshoot as a little private performance of sorts. I would say that when I transform myself into Miss Meatface I am in drag, so I guess you could also consider me a drag queen.

Do you have plans or new projects for the future?

I am thrilled to be having a solo exhibition in New York City this August at The Untitled Space gallery that is going to feature Miss Meatface’s work from 2020 up through to the present day. I’ve been working on a new body of work behind the scenes for the last year or so which is going to be unveiled at the exhibition so I am super excited to be bringing a whole new collection of Miss Meatface works to the world! The show will run for the month of August with an official opening reception date TBA, just make sure you follow me (@missmeatface) on social media for updates.

To the readers of WINGS magazine I would like to say: “Stay shiny, stay Meaty”.