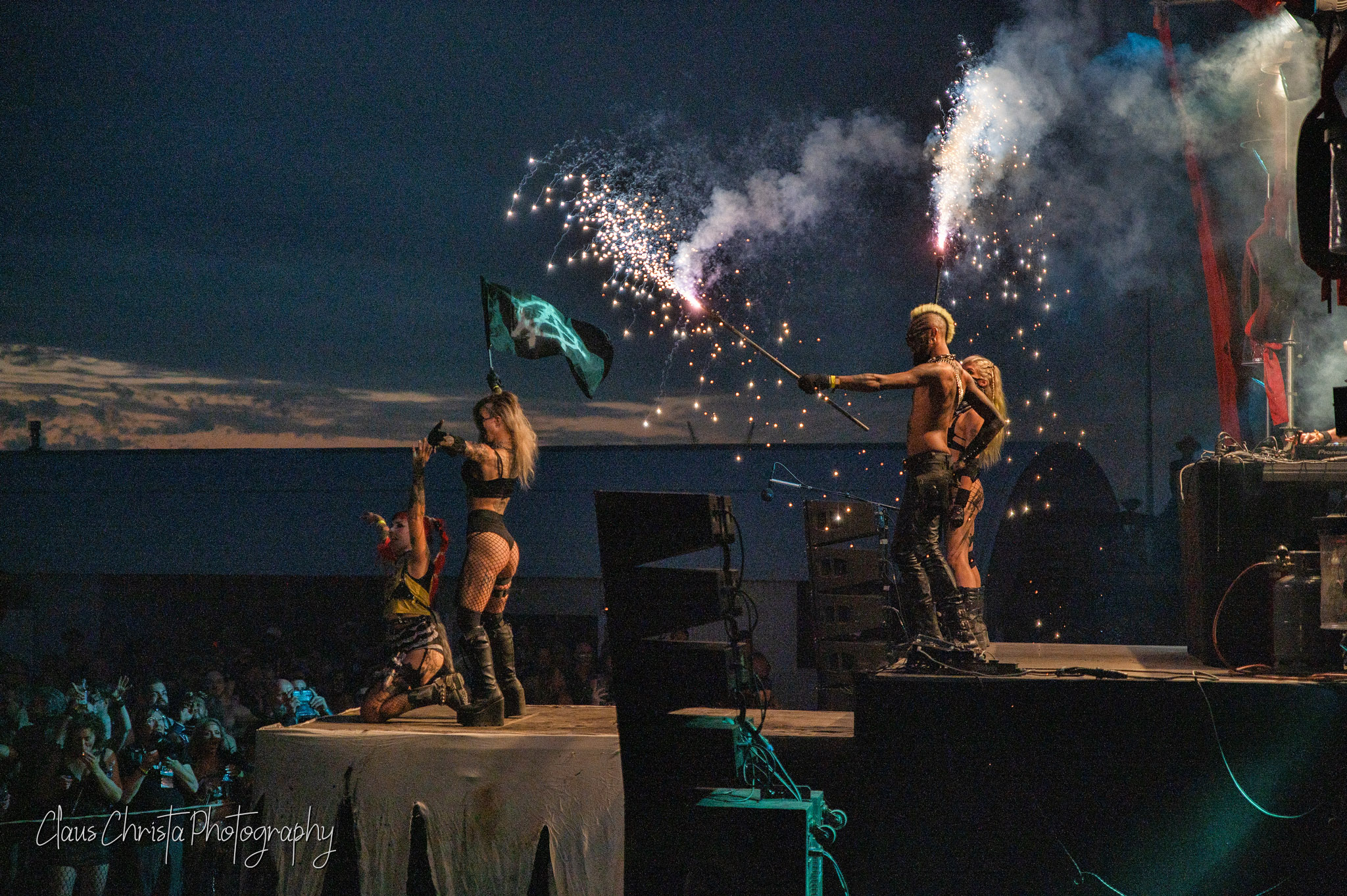 In July it was time for Wasteland Summerfest, and I was one of the lucky ones who got to experience it. For me, it was extra special because it was the first time ever going to a fetish event. I knew I was in for a treat, but I did not expect it to be so delicious and leave me craving for more…

I’ve heard stories about Wasteland’s strict dress code and the risk of not getting in, so I was quite nervous when I looked at my existing wardrobe and realized I had absolutely nothing to wear, except for my Mister B Urban briefs. Luckily, for Wasteland’s summer edition you are allowed to wear fabric as long as there is a Post-Apocalyptic twist to it. I decided to express my fetish by mixing up leather, mesh, and cross-dressing – I just love make-up and wearing skirts so my private parts can get some fresh air.

After a full day of shopping my look was complete: a black leather harness, a black mesh cropped bolero, a patent leather skirt, fishnet stockings, urban briefs, and a pair of black boots. For everyone who is anxious about shopping for fetish or kink stuff: treat yourself and go to an actual story, really. The staff knows what they are talking about and how to make you feel at ease; they have been in your kinky shoes before. At the end of the day, I felt like this kinky Angel of Death, and I was ready to dive into the wonderful world of Wasteland!

Together with a friend, I went to Wasteland by public transport which made me feel anxious at first; I was scared to get looks or hateful comments from strangers. While waiting for the tram at Central Station, the wind blew up my skirt giving me Marilyn Monroe vibes, showing my bare ass to the city. It was an obstacle I had to overcome but I’m glad I did. Yes, I did get looks and giggles, but somehow it fueled me. I felt like an absolute fetish princess, and nobody could stop me from feeling that way. We arrived at Kaap Amsterdam, this cute city beach far away from daily life, and it instantly made me happy. Seeing all those people dressed as their kinkiest selves, in a good mood, ready to party and let loose, felt amazing.

It was time to face the door bitches. I was standing in line and saw them checking out everyone from head to toe. Not as a joke, but for serious business. Some people got sent back or they were asked to change something about their outfit in order to get in. It was my turn. Again, I felt fabulous, but I had no idea if they would agree with me. I politely said ‘hello’, she scanned me from top to bottom, and with a nod and a welcoming gesture with her whip, she let me in. Thank God. My friend seemed to be in trouble because of his fabric choices but due to his army gear and semi-punk look, he was able to pass.

Once we were in, it immediately felt like a completely different world. Inside the gates, the festival oozed sex and freedom – hence the strict policy at the door I presume. The crowd was mixed; queer, straight, old, young, femme, masc, fully dressed, naked, many different body types, introverts, and extroverts. You name it. Although the white straights were in the majority, it didn’t feel like an unequal crowd – as far as I can tell from a white cis male perspective. But the thing that united everyone and made everyone seem equal was the level of sexual open-mindedness.

I don’t even know where to start. There was so much fun and kinky stuff to do, and I’m pretty sure I have only seen half of it. There were half a dozen stages for you to enjoy music and dance your ass off. The main stage under a big tent, an outside stage next to a hill where you could sit back and enjoy an overall view of Wasteland, a small stage next to the beach bar, a stage inside the bar, an indoor stage in a shed next to the ‘dungeon’. And all of it was easily accessible. Without effort, you could go from dancing to fucking and vice versa. Dragons were spitting fire, trucks with flamethrowers made the crowd sweat, even more, I have seen fireworks, dancers, performers on stilts, some sword swallowing action, there was a styling station to turn you into a Post-Apocalyptic maniac, you could get a massage, buy kinky stuff, follow a Shibari workshop, get wrapped in plastic foil, or just enjoy people having sex.

Wasteland is the perfect place to let your inner sexual beast out and fuck like there’s no tomorrow. I have seen countless dicks, balls, vaginas, tits, and asses during that day. It might sound extreme, but it all felt normal. For me, Wasteland feels like everything is possible, nothing is mandatory (besides the dress code obviously). While my friend and I were having a beer at the beach bar, I enjoyed two women going down on each other on a picnic bench encouraged by their husbands. In the dungeon, I saw this happy guy in a sling being fingered and pleasured by men and women. In a separate tent with beds in the centre, all sorts of people crawled in and over each other, living out their horny fantasies. It was mesmerizing to see all of this taking place within this free and safe atmosphere.

I have to admit that I was a good little boy and only made out with one hottie who I, unfortunately, lost immediately afterwards. I was curious to see everything, but not tempted to do anything sexually myself. Not this first time. Moreover, I was too busy being high on life (amongst other things) and the fact that I felt liberated from insecurities and self-awareness. At the main stage, I met this cute family, and it might have been the intoxication doing its work, but I was obsessed with how a mom, dad, son, daughter and her boyfriend were at Wasteland together, expressing their sexuality openly, and sharing their love for fetish and kink. I’m not saying I want this for me and my family, hell no, but the idea made an impression on me.

I truly have never felt so comfortable in my own skin. I felt hot, kinky, and free to be my sexual self. There are more festivals and parties that claim to be open-minded, but Wasteland is something different. People dress to impress, but it’s not a fashion show. Everybody wears whatever the fuck they want, and nobody gives a shit. And most of all, no one judges you. There are no fights, no drama, no angry or weird looks, and no popularity games. At Wasteland, people celebrate sex, kink, fetish, and open-mindedness.

As a fetish newbie, Wasteland Summerfest was the perfect place for me to start. I experienced a ‘light’ version of the world of fetish and I’m dying to discover more. I can’t wait for the indoor Wasteland editions in October and November to let my nocturnal sexual animal out. Wasteland Summerfest hazed me in the best way possible, and it left me craving for more…