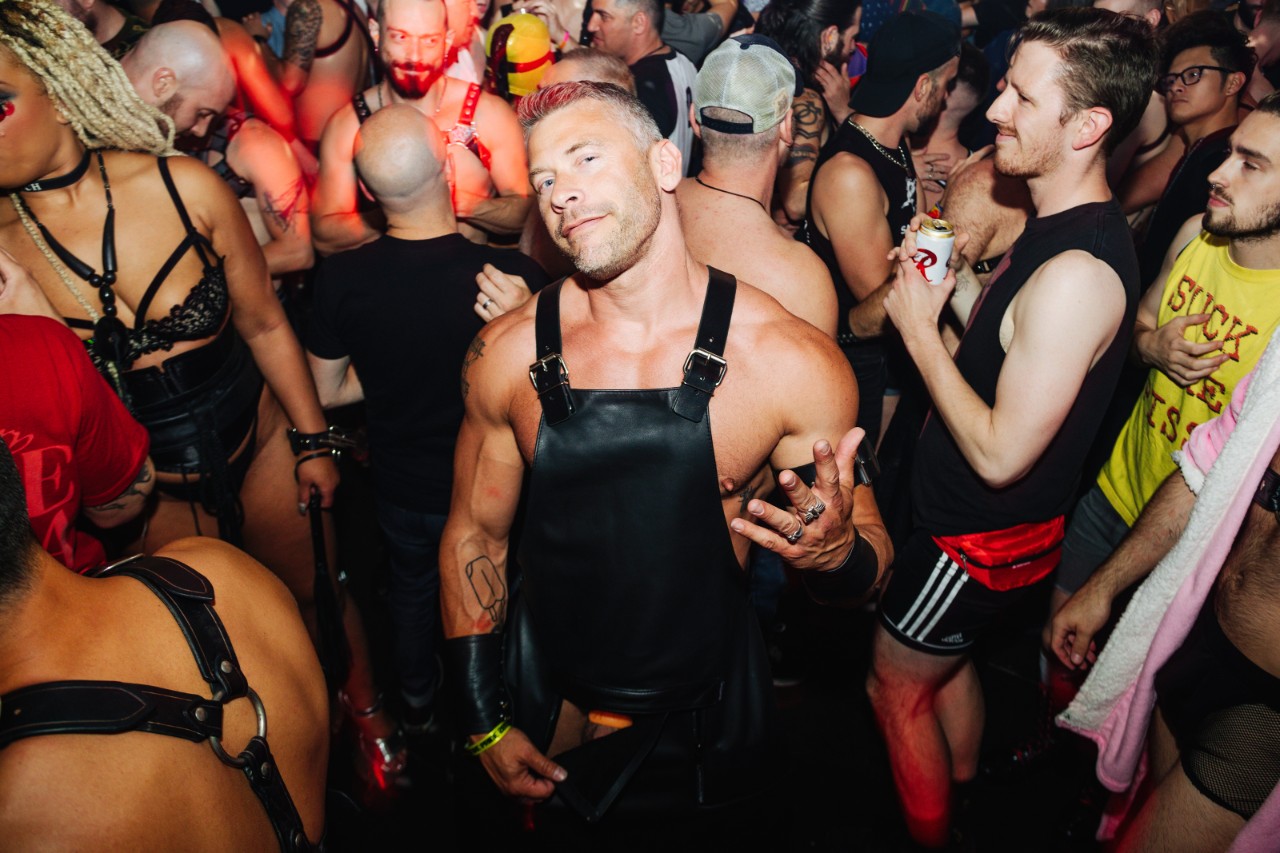 Issue 09Most-Read in 2021Watch this face

Spoiler alert! Terry is not from Finland – he is from the States – but he is the official Tom of Finland ambassador, which means he is basically Terry of Finland, from the States, last name Miller. Aside from that he is super-hot, kinda like a Tom of Finland drawing come to life. Wings talked to Terry about the Tom of Finland Foundation, things that make him hard, online censorship, and his love for leather. 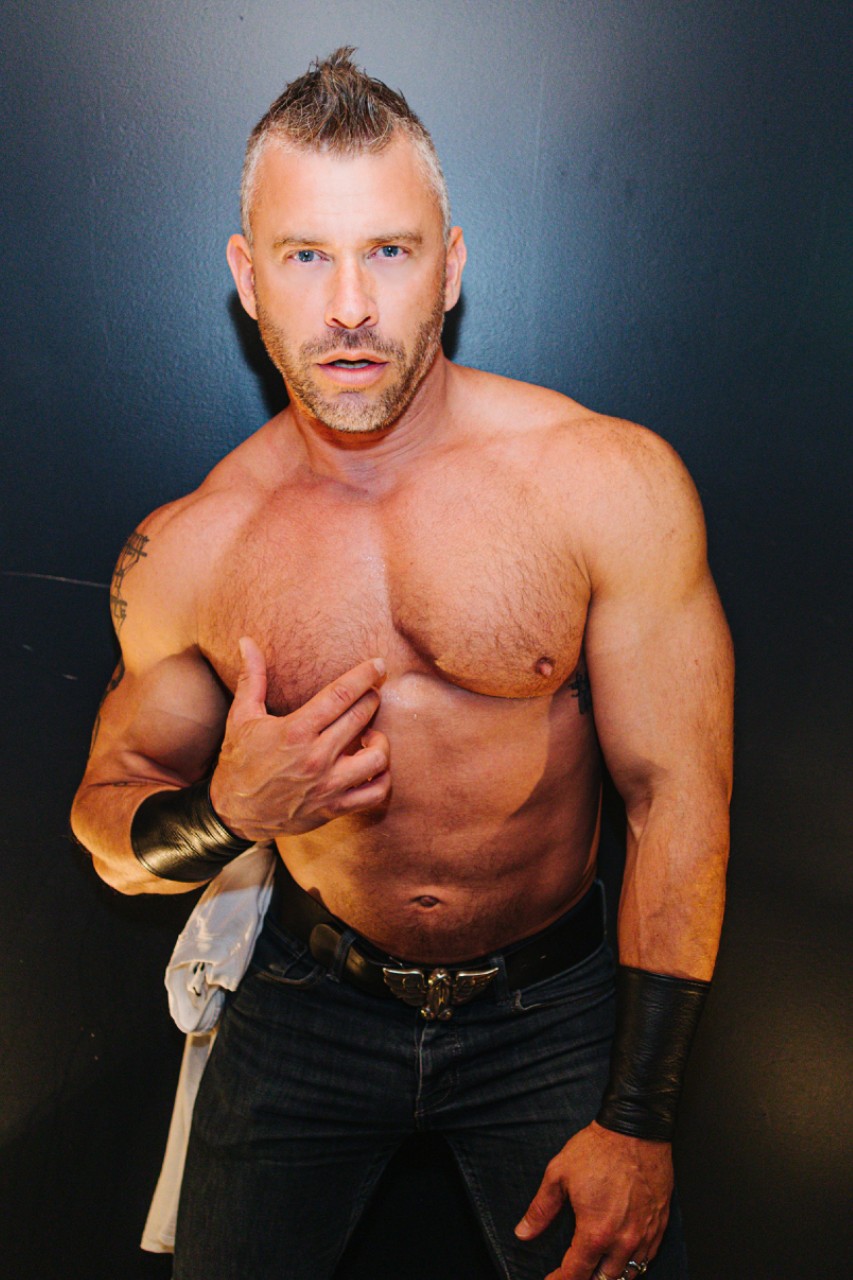 Terry, how did you discover Tom and his artwork?
“I probably saw my first Tom of Finland image as a teenager in a porn magazine that I stole from somewhere (laughs). Every leather bar in America in the eighties and nineties was wallpapered with his drawings; you saw his artwork everywhere. It was a template for how some gay men wanted to look, or how they wanted to be perceived, by each other and by straight people. It was a reaction to the prevailing stereotype at the time that all gay men were thin and swishy. Tom created this hyper-masculine, idealized form partly in reaction to that. The image he created called to me when I was younger. I was really attracted to it.”

Which Tom of Finland character spoke most to you back then?
“There are two drawings that I really liked when I was younger. There is the one with two leather men in full BLUF outfits holding each other, face to face, their crotches just touching. And then there is that famous image of the daddy lifeguard holding up a boy that he has just plucked out of the ocean. It made it hard for me in swimming pools for a long time, although there was never a lifeguard like that at my pool. It was always some pimply teenager who was taking a summer job (laughs again).”

“YOU ARE MAKING ME WORK STILL. STOP IT BOY!”

What makes Tom’s work so special?
“There is a lot of aggressive and anonymous sex, and a lot of darkroom fantasies going on, but there is also this sense of camaraderie between all these men. There is never any judgement, hate or shame involved. It is real men, really enjoying sex. And at the end of every scene these men don’t just wave goodbye and walk off, but they put their arms around each other and grab a beer together. Or they head over to the ice cream stand to get a popsicle. That camaraderie is cool and beautiful, and it is something I have always enjoyed about his art.”

I recently described this behavior in an issue of Wings as ‘gay men fucking their way to a friendship’…
“My husband (Terry is married to LGBT activist and writer Dan Savage – Ed) and I have always said that gay men shake hands with their dicks. You hook up, think the other person is fun – not boyfriend material per se – and decide you should just hang out, play video games, or go to the movies together. It may start with sex, but it doesn’t have to only be about sex after you connect.” 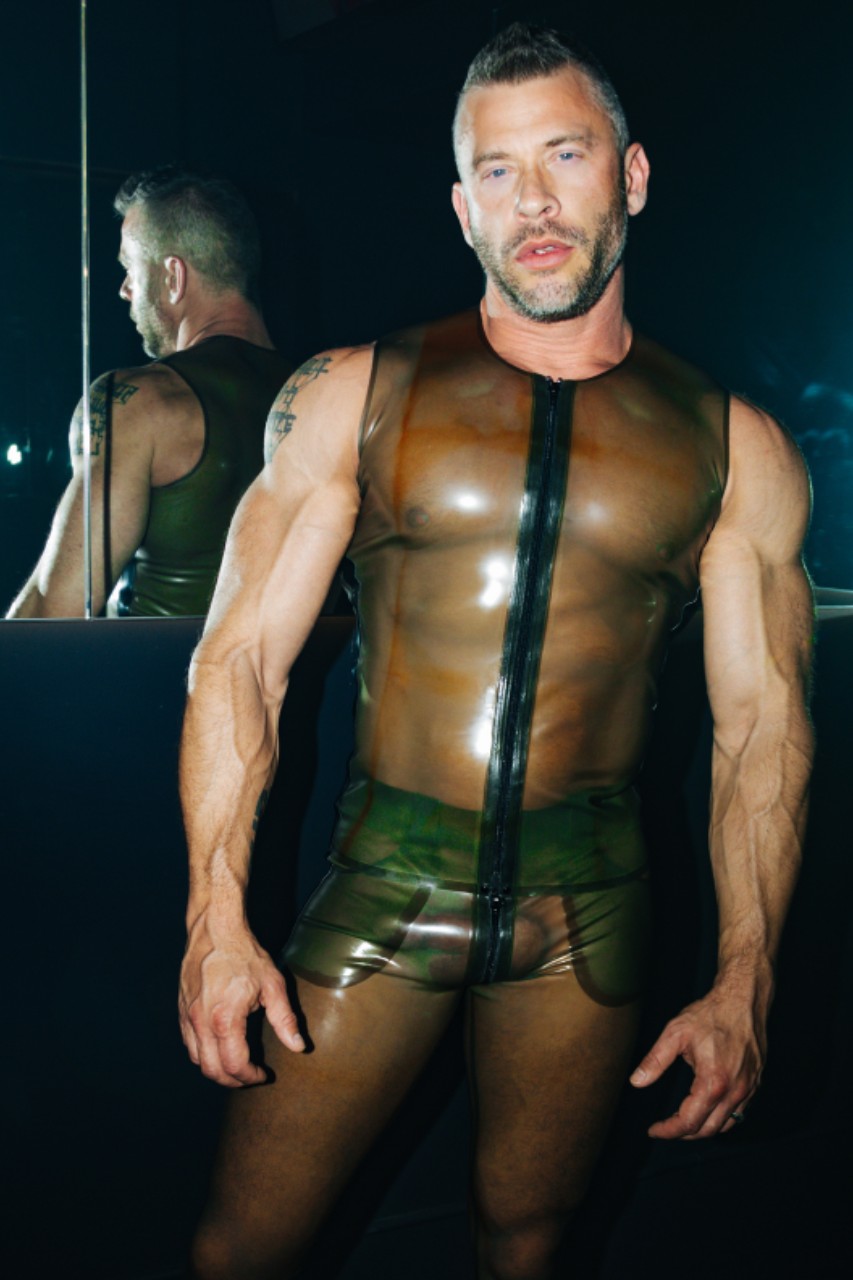 Have you ever had to deal with censorship yourself?
“I have been blocked once on Instagram because of my content. I have been careful with what I post ever since. It is basically the straight community telling us ‘we don’t want you to be gay’ or ‘we don’t want you be that gay’. We have to fight this censoring of our lives. These large media companies are erasing gay lives and it suuuuuucks. They really wish we weren’t the people that we are. I totally self-censor, because I am afraid of what will happen when I post something that is too out there or when I show too much of my body. The Tom of Finland Store gets posts taken down all the time. Even when I put emoji’s over body parts it is still too much for Instagram and its algorithms. It kills me when gay guys tell me I should expect censorship because I am not following the rules of the platform. I think that is a really shitty attitude to have and a shitty way to lead your life. It is very complacent and it feels like you are giving up without a fight.”

Let us get back to Tom of Finland! How does he influence your personal style as a leather man?
“I always pattern both what I am wearing and the way I am wearing it on Tom’s drawings. I wear my boots with skintight jeans when I am not in an all leather look, and I roll them up in a thick, 3-inch cuff, the way Tom has drawn it throughout his career. It really shows off my crotch and butt. I also have a full BLUF look. I had Mr. S Leather put an extra big collar on my new leather jacket. Like Tom’s motorcycle guys I always wear it up. All my leather gear is custom made because I am really picky and into fashion. I don’t like to look like everybody else. I try to have my leather customized in a way that it is more extravagant. The lines are a lot ‘thicker’. The jeans are always tighter than they should be (laughs). Visually it has to come across as bigger, broader and bolder. I am very wide in the shoulders and chest. I have a natural V taper from being skinny as a kid, and exploding in size in my thirties. It just looks extra when I am wearing a leather jacket and the collar is almost as wide as my shoulders.” 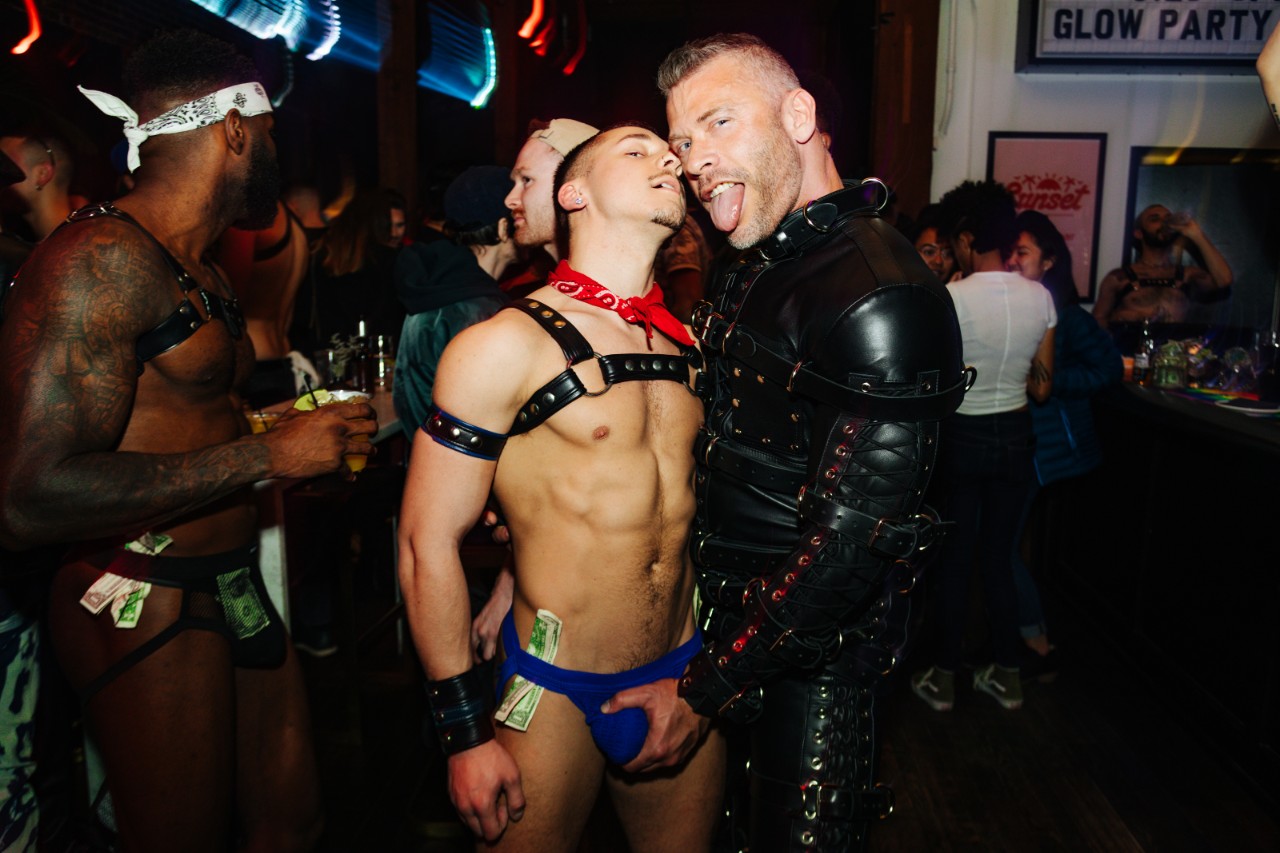 At Wings we are always curious about the kinks and fetishes of the people we meet. What role do both play in your life?
“My main fetish is leather – clearly – and I love kink. It is a great way to have sex. But I am not a 24/7 person. I don’t walk around in leather underwear at home. I have my husband, and I have a boyfriend, but we don’t all live in a very strict BDSM relationship all the time. It is not sustainable for me. I am the kind of guy who can snap into a role for role-play and sex, and afterwards I just want to watch Netflix and have a drink. ‘You just come up from the floor and cuddle with me. I don’t need you to keep groveling at my feet afterwards. You are making me work still. Stop it boy!’”

What gets you going in bed?
“Bondage. I use ropes to tie people down, but I am not really big on shibari. I love using leather for bondage, like belts and straps, sleep sacks, straightjackets and bondage suits. Somebody has taught me the same knot ten times and every time I see him I ask him to teach me again. I can’t keep that shit straight. I love people who are artistic about rope, but I just cannot do it myself.”

Any new projects coming up in 2020?
“I have directed my first porn for Men.com, which is coming out early this year. It features a couple of guys initiating and mentoring a young fellow who happens to find himself in a leather bar. I wanted it to be aggressive and dirty. I talked to Men.com about what would be acceptable for them (laughs). They don’t do a lot of hardcore kink and I think I have pushed the envelope for them, in a direction they haven’t gone before. I found a really aggressive bottom (laughs again) who can take a lot and some guys who are really willing to give it to him (laughs louder). There is a lot of leather involved. It is gonna be a sexy film!” 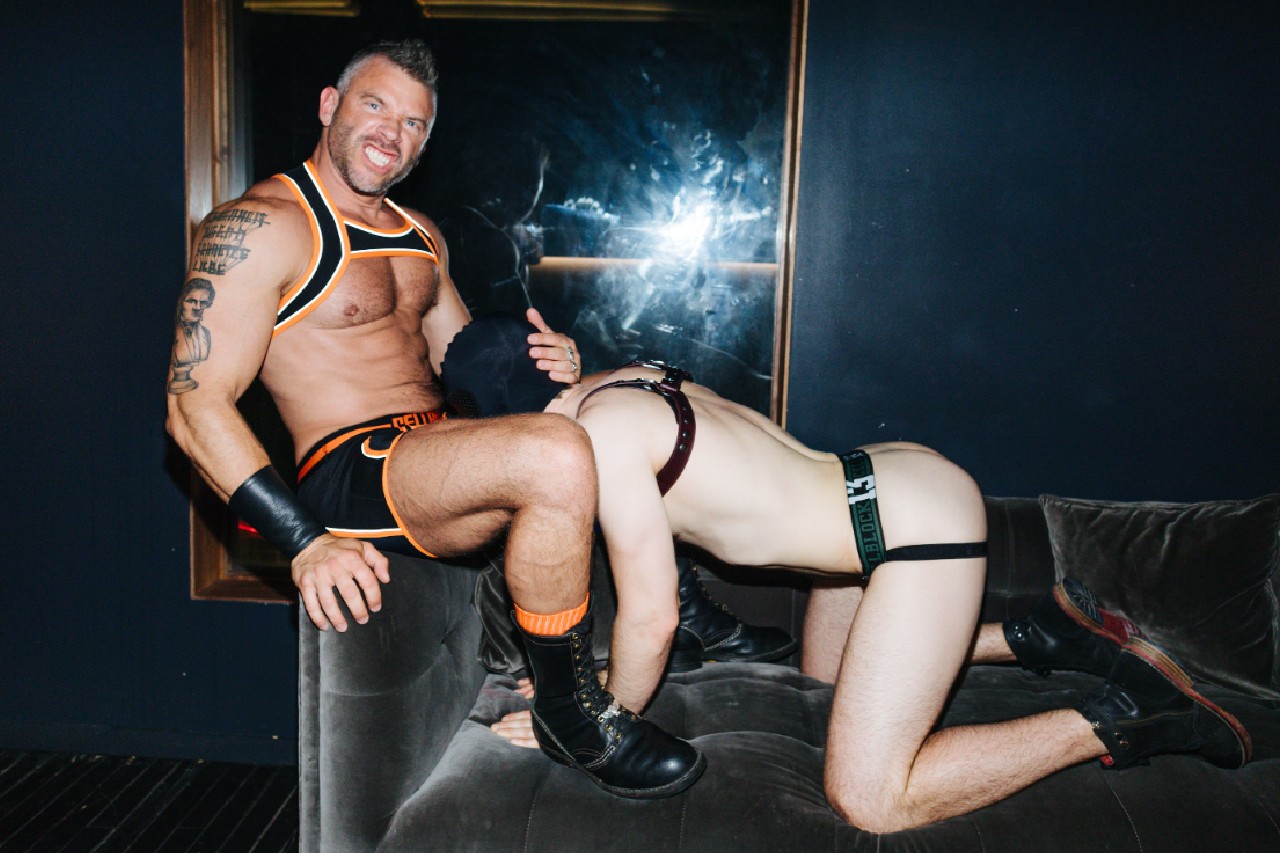 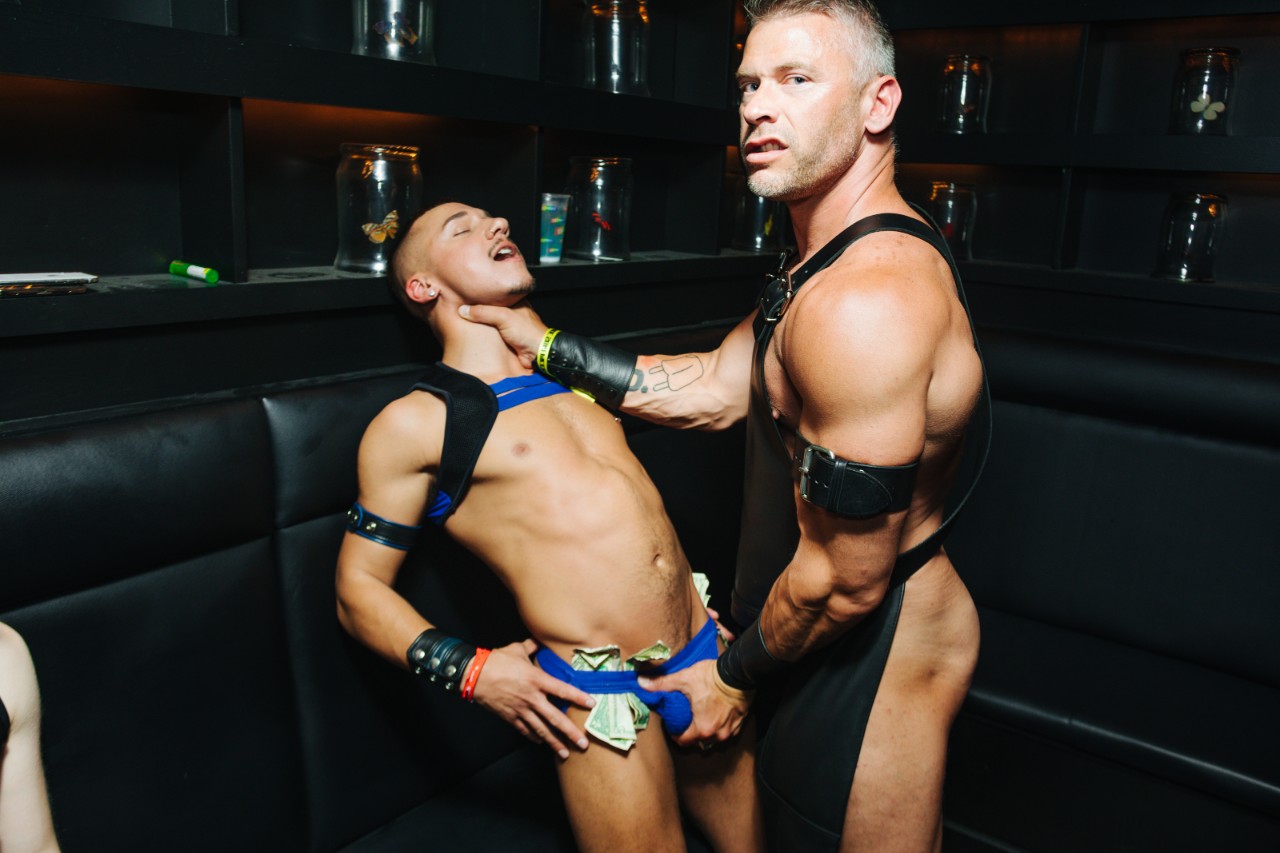 Want to know more about Terry Miller?
Then check his Instagram @terrysphots.
Also visit www.tomoffinlandfoundation.org
for more info on the Tom of Finland Foundation.