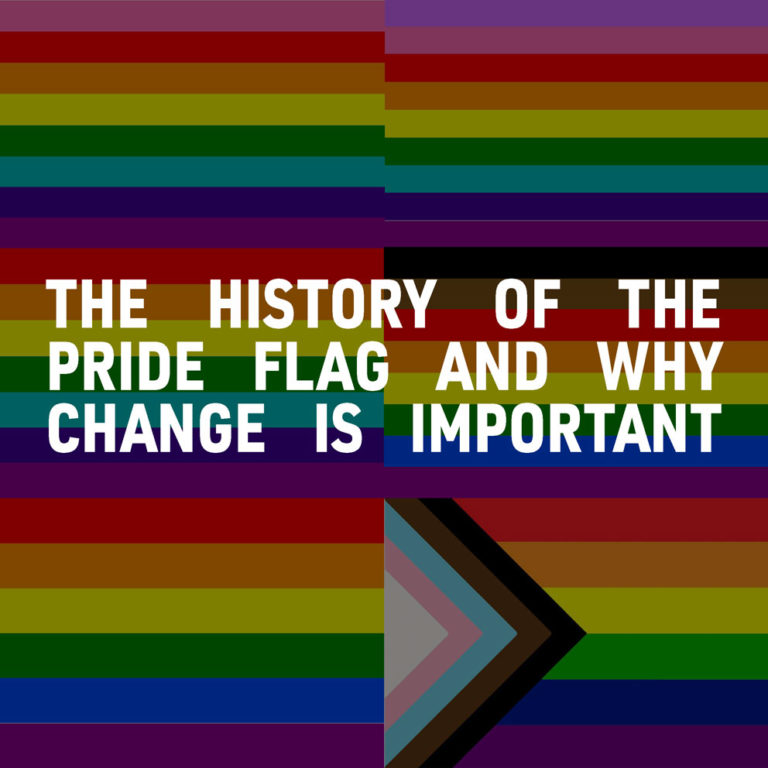 The History of the Pride Flag and Why Change is Important

The History of the Pride Flag

From decorating car bumpers to lighting up national buildings, the rainbow flag has been a symbol intended to acknowledge and signify justice and respect for the queer community. Though we see its commercial use, its roots are in activism and it’s grounded in the idea of change. Here is a rundown of how what we know as an old, fixed symbol of pride has a bit of a fractured youth narrative. 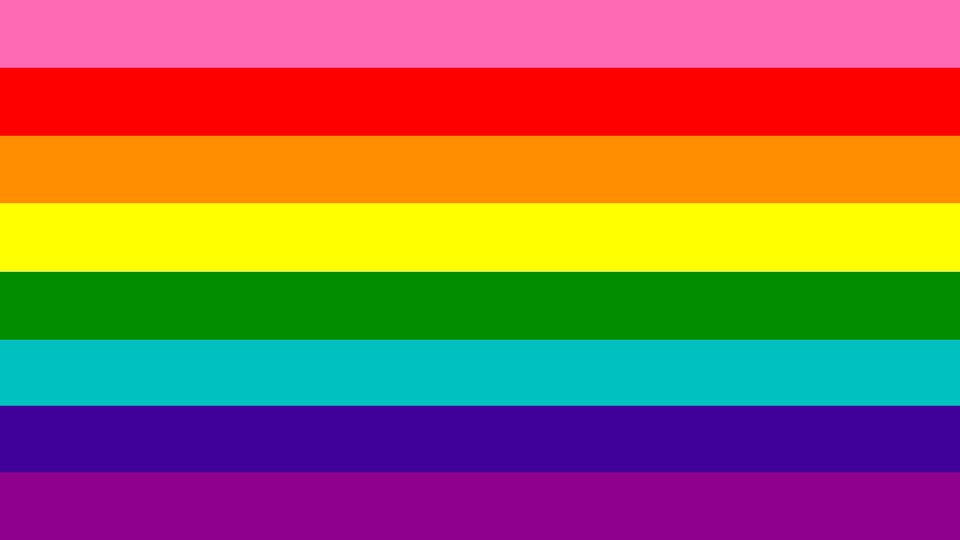 Originally flown in San Francisco during the pride event of 1978, the rainbow flag is now a global symbol of peace and unity for the LGBTQ+ community. In its design, each color is meant to have a different symbolic meaning like pink for sex, red for life, and green for nature, to name a few. At the time of its creation, the pink triangle was still the only symbol being used to represent the gay community. Because the pink triangle was originally used as a tool for Nazis to identify and persecute homosexuals, Harvey Milk, (the first) openly gay politician in California at the time wanted a new, more uplifting symbol to be presented at the pride festival that year. Milk asked a prominent, local gay artist at the time, Gilbert Baker, to create something new to represent and inspire the queer community. The flag was created that year and it had eight stripes. From hot pink to violet, the first flag was hand-dyed and stitched together by volunteers and flown with pride for the first time on June 22, 1978. 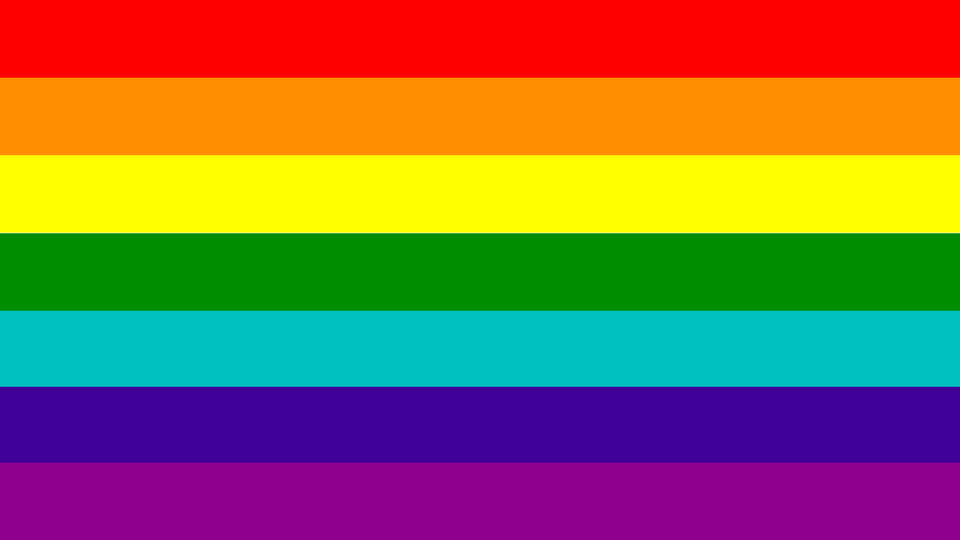 Unfortunately, later that year Harvey Milk was assassinated. The San Francisco community felt inspired to continue using the rainbow flag and therefore it became more popular and was intended to be flown again in the 1979 pride parade. As popularity grew, large scale production started and the company producing the flag ran out of pink fabric to complete the flag. Because of that, the pink stripe was simply pulled from the design of the first version of this symbol of unity and pride. 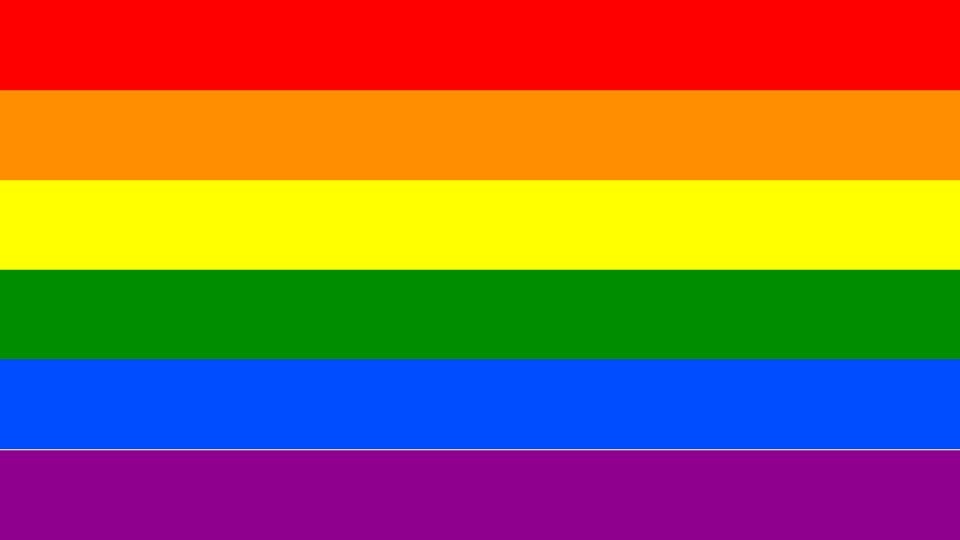 Right before the 1979 parade, there was another change made. The organizers wanted to flank the parade with half of the flag on each side, but because seven colors wouldn’t split evenly they made another adjustment and pulled turquoise from the arrangement and change the blue to a royal instead of indigo. This is how the flag which we are all familiar with today, was born. 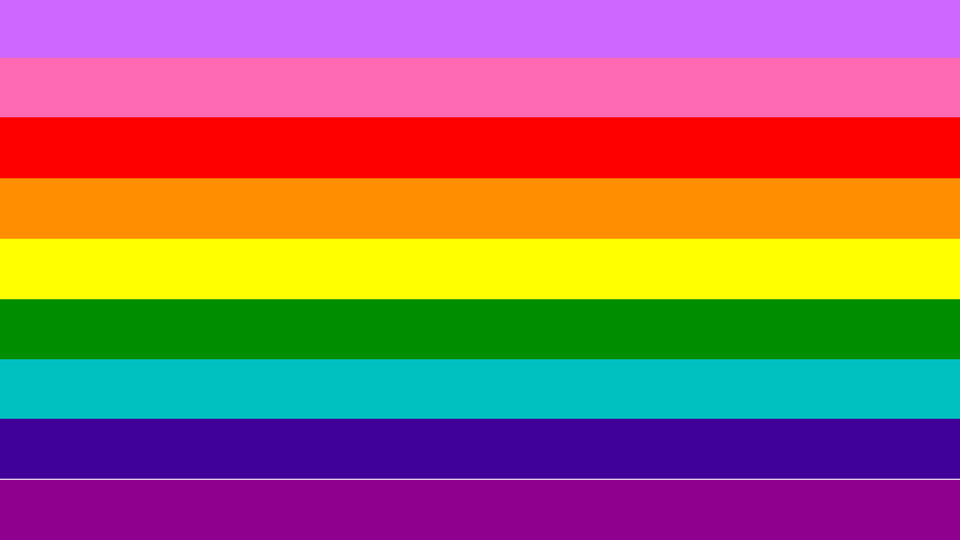 With this in mind, Gilbert recently made a newer version of his original 8 stripe flag with a ninth stripe, lavender to represent diversity. 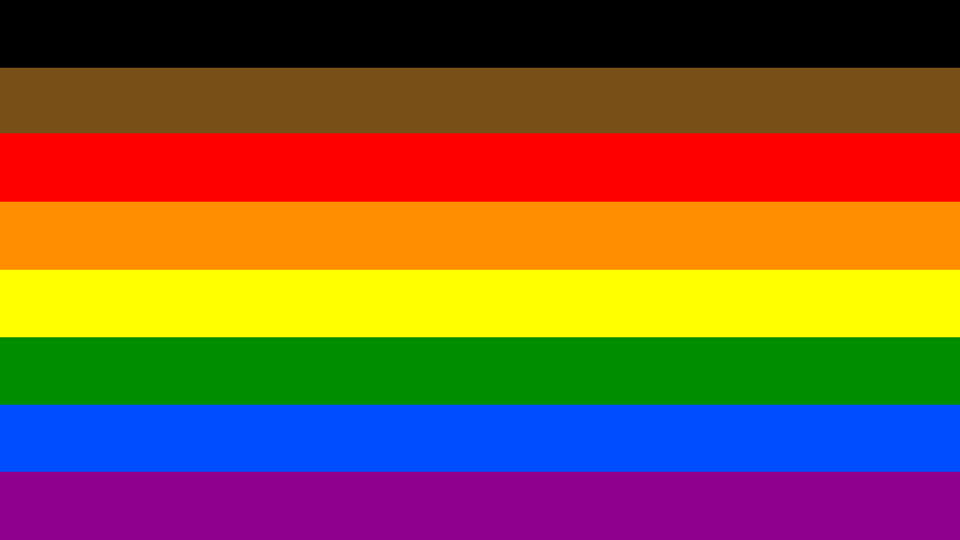 This look didn’t really take off, but there was, however, another flag design reboot that did get a little more traction. Later that same year the Philadelphia flag was created. Finally, a flag that is fully inclusive of black and brown community members. It recognizes the disproportionate visibility and representation of racial diversity in the LGBTQ+ community. It also acknowledges the specific discrimination faced by black and brown people and is intended to honor and respect all members of the community. 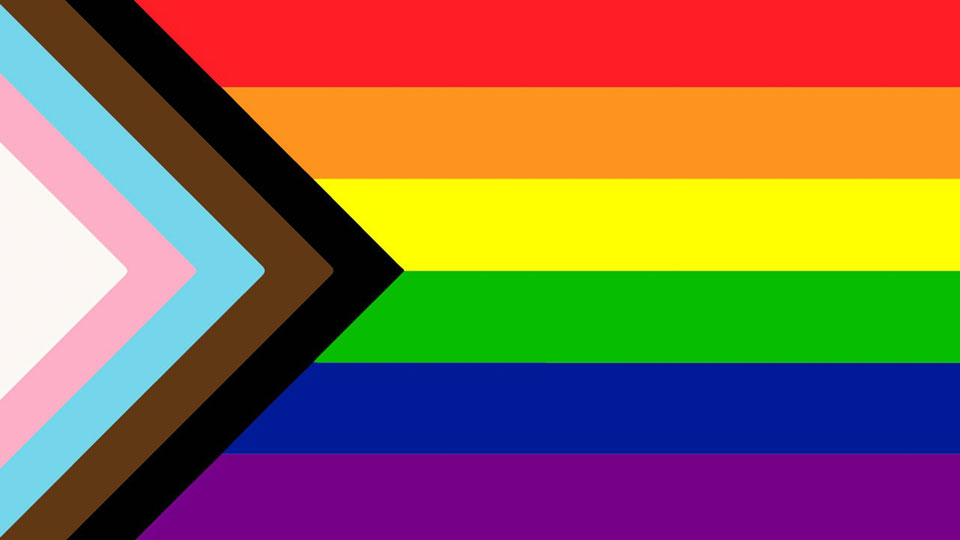 A year after the Philadelphia flag was born, artist Daniel Quasar designed and presented a new flag that incorporates the black and brown stripe of the Philadelphia flag, plus the light blue, pink, and white colors of the trans flag. It’s called the progress pride flag because it symbolizes exactly that. By changing the highly revered traditional pride flag to show diversity and inclusion, it gives more meaning to the flag, expressing both its original intention of inspiration for our movement, and its current meaning of equality and inclusivity.

Quasar kept the original six colors to maintain the heritage and history but added arrows on the left of the flag pointing to the right to symbolize the direction of progress moving, as there is still work to be done. The fact is, there is no equality and inclusion yet for all members of our community, and as Quasar puts it: “We need to always keep progress moving forward in all aspects of our community.” Change is inevitable within society, and therefore it only makes sense that the symbol for an evolving society should change as well.

The original intersex flag is a yellow base with a purple ring in the centre. The colours purple and yellow were used in the design as an intentional counterpoint to the more traditionally gendered colours blue and pink. The designer is Australian Morgan Carpenter, who says the ring in the design is a symbol of being whole and unbroken. It is meant to offer a meaningful alternative to how intersex folks have been represented and treated by the medical establishment and broader society.

The Intersex Progress Pride Flag is a way of showing pride in and support for intersex folks who, like other identities within LGBTQ+ communities, have suffered discrimination and violence based on society’s gender and sexual norms and expectations.

Why Change is Important

This past half-year has been monumental. From the coronavirus crisis to Black Lives Matter (BLM) protests, history is being made and stories are being told, now also by those who haven’t really had the platform to write or tell history before. Those of us using social media are the new writers of history, and not only are we recording history in such a raw form with live cellphone video, but we are also directing our histories as well. For some of us, this is an opportunity to help others, especially those of us who have been harmed by our histories and historical narratives. What we have seen develop through social media and the BLM movement is remarkable and something to be proud of. People have never come together in support of others to this magnitude ever before, and it says a lot about who we are and what we want. We see we need to make changes and we welcome them bravely. For this reason, we are looking at changes we need to make within the LGBTQ+ community as well because not everyone is treated equally.

The pride flag is a perfect example of this. This symbolic rainbow has had a few changes since its first inception. Although we are all very familiar with the six-stripe rainbow flag we see paraded around town for a few weeks each summer, there have been (and probably will be) other versions of it. And that’s just the way it is: with progress comes change, and we are welcoming it more than ever.

What used to be called the gay flag, just like pride was once called gay pride, is now finally being acknowledged as a flag and event to symbolize all members of the queer community. The reason the term gay flag or gay pride is no longer in use is because of the erasure it perpetuated of so many members of the queer community. By saying gay pride, it excludes all other members of the community. The problem is, just because the flag is no longer called the gay flag, the meaning is still just that to so many people and that means that so many others are still being excluded. Why this matters so much is because those who are excluded, ignored, invisible to mainstream society, are typically those who are also experiencing the most hurt, violence, and systemic oppression. If a flag is supposed to symbolize an entire community, how can it do so when it is tied to an exclusionary history and culture?

And with that belief, this newest version of the pride flag was born. The traditional rainbow which we know and love, anchored by the colors to represent trans people and people of color, to acknowledge, respect and support those who have been both at the frontlines of our movements and also most marginalized by them at the same time. The Stonewall riots were started by gay men of color and trans women of color, like Marsha P. Johnson, known for throwing the first brick to police officers at the riots. This event incited the first pride weekend, which lead to an annual event that we now get to celebrate our freedoms.  Trans women of color, like Johnson, have been doing the work for change, but unfortunately don’t get to reap the benefits of it. Trans women of color are dying in disproportionately alarming rates. Specifically, research shows that black trans women have a life expectancy of about 36 years.  When members of our community are at such great risk, we can’t blindly celebrate pride each year and not do anything about it. The least we can do is acknowledge, talk about, and do some work towards helping our fellow community members. What the BLM movement has been showing us is that there is a lot of work that has to be done to try to repair the damages already done, and make the future brighter for black people and all people of color, both within the LGBTQ+ community and outside.

By waving this newer version of the pride flag you are acknowledging that there is still work to do. This flag stands for a belief in making the greater LGBTQ+ community safer and more inclusive, and it reminds us to be better supporters for those who are experiencing greater marginalization than others. It can also remind us of change. What we have seen happen this year through social media is powerful and the use of this flag in this process of social change is meaningful. We can take that meaning and let it guide us going forward. Let it lead the way for change in our communities and our minds because change is good…change is growth. People change, communities change, values change, symbols change and you can’t have progress without change.

Get your own Progress Pride Flag at Mister B 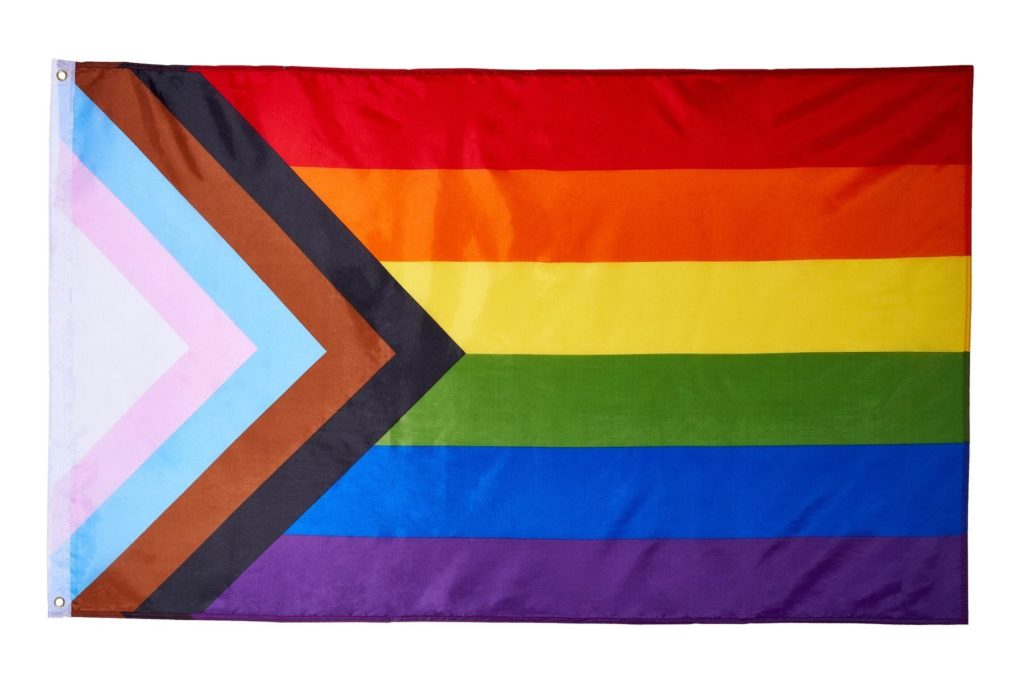 Be proud with this new symbol of pride and unity! This new version of the classic pride flag is a representation of both the diversity of our community and the progress we have made by supporting each other. Wave it from your balcony, your front door, wear it as a cape, or simply carry it with you along with your protest, march, walk, or any other celebration of LGBTQ lives. 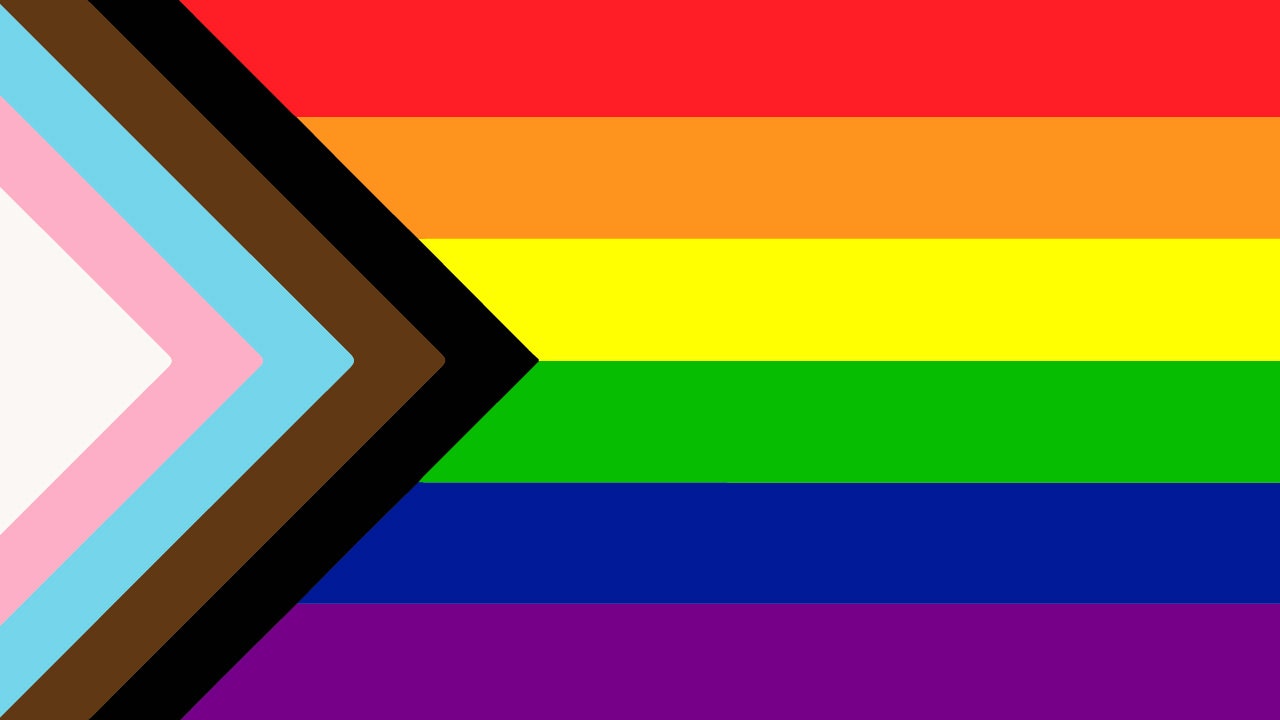