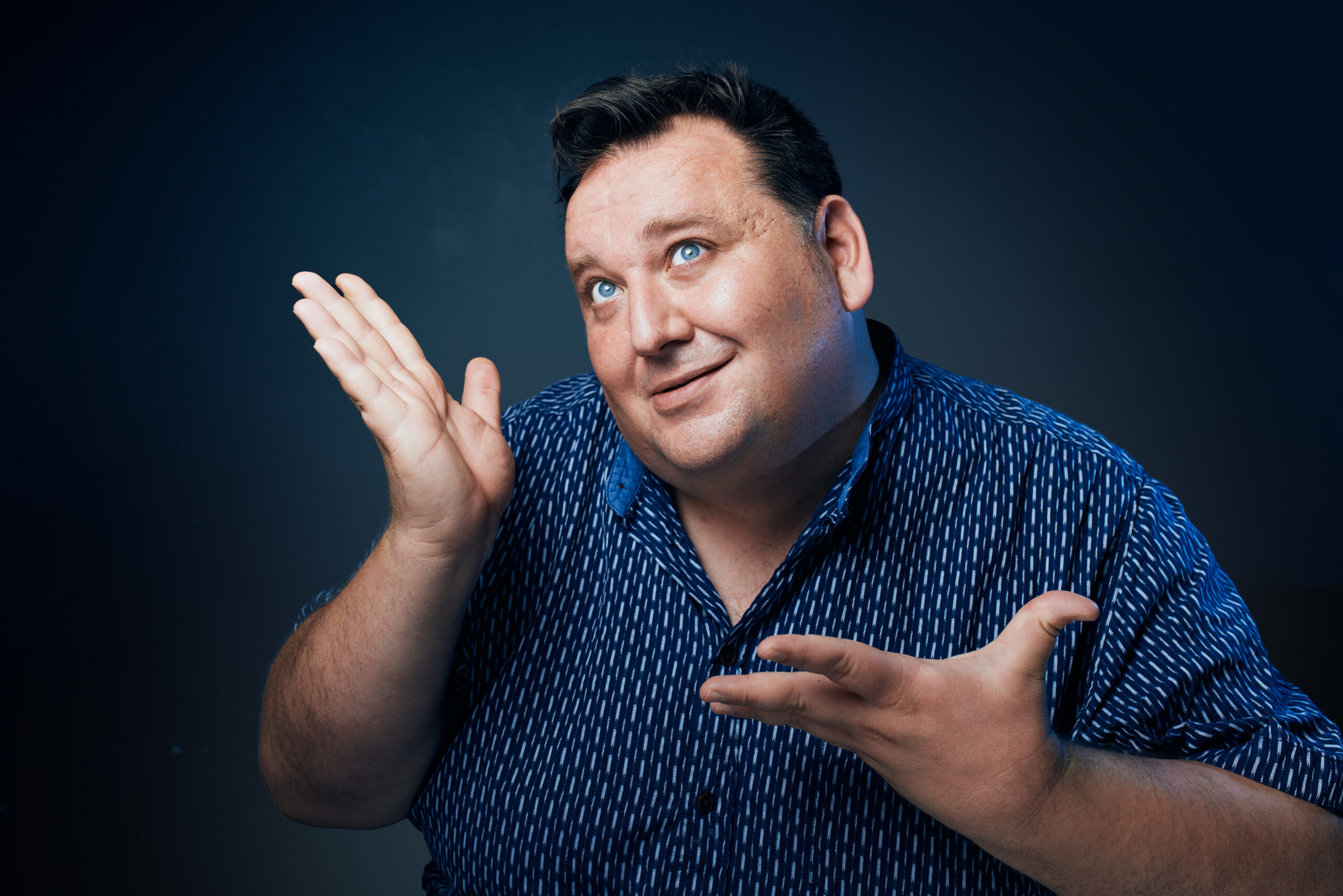 WINGS magazine wanted to check in with Berlin-based stand-up comedian Daniel-Ryan Spaulding, whose hilarious videos on Instagram helped us get through multiple lock downs.

We asked him what it was like to go viral (pardon the pun) during the pandemic, discussed the lack of critical thinking these days, and we even covered the subject of his sensitive, big balls (as you might have figured out yourself from the ‘in your face’ title).

“I find myself quite funny, so for me it makes sense that others would find me funny as well (he chuckles). My life is about entertaining people and making them laugh. It was nice to get a bit of attention and recognition at a difficult time. I lost the ability to perform live, which is how I had been supporting myself for the last decade. I became a content creator out of necessity, and it has become a positive thing for my career, which is amazing. I basically lived off of PayPal donations from my followers for the first three months of the first lockdown.”

Crazy! Could you really pay all your bills through that?

“(in a teasing tone) You’re soooo Dutch. I’m not gonna tell you about my finances (he laughs).”

How do people react to your videos? Do you get any strange comments?

“Germans don’t always understand that I play a character in some of my videos. They think I’m a crazy person sharing his actual unfiltered thoughts online, instead of me being an actor sticking to a script that I wrote. Germans are very literal. They don’t understand that comedy has a lot of layers. If you don’t get that basic concept, you’ll perceive me and my videos in a very different way. Some of the monologues I did about The Netherlands are old stand-up comedy routines from when I was still living in Amsterdam. To some people they come across as overly critical or harsh. When you hear them live in a bar and you’ve had a couple of drinks and you’re loosened up, those jokes work really well. You can be brutally honest in a setting like that. But when those monologues show up in your Facebook feed and you’re at home minding your own business, you could perceive me as being hateful. But that’s so far from the truth. I’ve lived in The Netherlands for a long time and I delved into the workings of its people and analyzed its culture. A hateful person wouldn’t do that. A hateful person just hates for the sake of it. Sometimes that’s the most frustrating misconception or feedback that I get.”

So, wait, let’s rewind, you’ve been playing a character ALL THIS TIME? Does that mean you haven’t moved to Tel Aviv? And that you’re not busy living your best ‘kibbutz life’ with a dog, a goat and your hot Israelian boyfriend Yehuda?

“(laughs) A lot of people really think that I’ve left Berlin and that I’ve moved to Tel Aviv. And I’ve tried so hard to make it clear that ‘Tell it to the Vive’ is just a new web series featuring my ‘It’s Berlin’ character ‘DaNiel’. Even people I know have called me up to ask: ‘Did you move?’ I never understood how people can be so susceptible to QAnon or anti-vax propaganda, but I’ve started to realize that people really are kinda dumb. Not in the sense of being stupid, but more in the sense of being naïve, like children. Whatever they see, they believe. Critical thinking is out of the door. People aren’t questioning things anymore.”

In your podcast ‘The Roaring 20’s’ and in your videos, you’re critical of a lot of different things. Ranging from Nancy Reagan and her role in the HIV crisis in the eighties, to German bureaucrats and their almost perverse love of paperwork. And when you really disagree with something, you go in for the kill. Have you always had this attitude?

“I always hated being told to ‘shut up’ or to ‘not say that’. I don’t like to be silenced. My dad’s side of the family is old skool Croatian. They’re kinda homophobic. I felt like they didn’t really respect and accept me the way I deserved to be respected and accepted as a child. I’ve always had this real desire to stand up for myself. And once I started doing stand-up comedy I decided: I’m going to say what I want to say. I’m gonna have opinions, and I might be wrong at times, but I’m not going to be afraid to stand up for myself or for what I believe in. Life is too short to always be afraid to say what you feel.”

Let’s talk opinions then. What is on your mind right now? What is triggering you as we speak?

“Oh gosh, let me think. Well… I’m seeing this guy and our first date went really well, but the second one was a bit weird. It was a Friday night, and he didn’t get the fact that I wanted to stay home and watch television. He probably thought I wanted to go to bars and stuff. We ended up fooling around a little, but he never got hard. When I asked him what was up, he told me he had taken some MDMA before coming over. And I’m like: ‘It’s our second date and you’re on drugs? And you didn’t even tell me?’ I mean… what the fuck! I just wanted to watch some Netflix and have a pizza, and he was high the whole time. What has the world come to? Who are these people? I don’t understand the logic of that.”

“I jerked off, he kissed me, we cuddled, and then he left. I was like (in an uncomfortable tone of voice): ‘Ooooooh, this is weird.’ I was doubting if I should see him again.”

Have you heard from him since?

“Yeah… I’m gonna meet him after this interview (laughs).”

I love it hahaha.

“Anyway, dating situations like that frustrate me. Living in Berlin is also on my mind. The party scene there is overwhelming. People behave like they’re in high school. Everyone is so concerned with what they’re doing in the weekend; which parties they should go to; what clothes they should wear. In other cities you can go to a restaurant and a cocktail bar and be home at 1 or 2 AM. In Berlin everyone has to be in a harness, with silicone horns coming out of their foreheads, and they’re all obsessed with fucking and doing drugs. I don’t need to be strung out on drugs until the next morning, paranoid in my home, up all day, not able to sleep. I’ve come to realize I don’t want this Berlin party lifestyle anymore. I’ve noticed that a lot of people my age, in their mid-thirties, feel the same. Having the clubs closed, woke us up. People are either pulling themselves out of it, or they’re becoming worse than before.”

Are you thinking of leaving Berlin then?

“No, I think Berlin is a good base and it’s working for me now. It all depends on the direction my career takes me. I wouldn’t mind living in London, New York or Los Angeles; or even moving back to Amsterdam. The main thing is that I want to produce television series and be the star of a TV show. Wherever that might happen, that’s where I would like to be.”

Let’s switch topics. We’re a queer kink magazine as you know, and I was wondering what your personal kinks and fetishes are.

“Well, I’ve been tied up a couple of times before and I kinda enjoyed that. I like a daddy-son roleplay kind of situation and I’m into group sex. I haven’t had a lot of that, but I really want to (he says in a shyish, playful tone).”

Is there anything new you would like to try out? Any scenarios that you’ve fantasized about?

“Sex with strangers or with someone who’s wearing a mask, so you don’t know who they are. I’ve fantasized about someone coming into my hotel room; they fuck me, leave, and I never see who it is. What else… uhm… or sex with a police officer; I get into trouble and the only way to get out of it is by giving him a blowjob. Taxi drivers are a big fantasy for me as well. Let me think, who else do I want to have sex with? (laughs gleefully and continues) Or cruising for sex in a park and then I make eye contact with a guy, he comes over and I blow him; he’s married and he’s just using me. He calls me a faggot and tells me to suck his dick in a rough way. I’d like that (huge smile on his face).”

Is there anything that you’ve tried out that you didn’t like?

“Any sort of ball play. Tying them up for example. I don’t like that. This guy tried to put a cockring over my testicles once and it hurt one of my balls. It was swollen for a bit and I was like: ‘Leave my balls alone!’ I have sensitive, big balls, and you have to be gentle with them.”

Hahaha, I think we have a title for the interview right there. Is there anything else you would like to share with our readers?

“Don’t limit yourself in terms of whom you should have sex with. Don’t go into things with a preconceived notion of what someone should look like. Try having sex with someone that you normally wouldn’t have sex with. Feel the energy of a person instead of looking for a certain type, race, look or age. I’ve had some really interesting, great, hot sex with people that I wouldn’t have gone for in the past. Be a little bit more open!”

Daniel is touring Germany this summer. You can catch him in Frankfurt, Cologne, Munich, Hamburg, Leipzig and Berlin. He’s also doing comedy shows in The Netherlands, Belgium and England. Visit www.danielryanspaulding.com for more info, tickets and tour data, and make sure to follow Daniel on Instagram @danielryanspaulding for your daily dose of insanity.
All photography by Maximilian Kōnig (@studio.maximilian.koenig on Instagram).