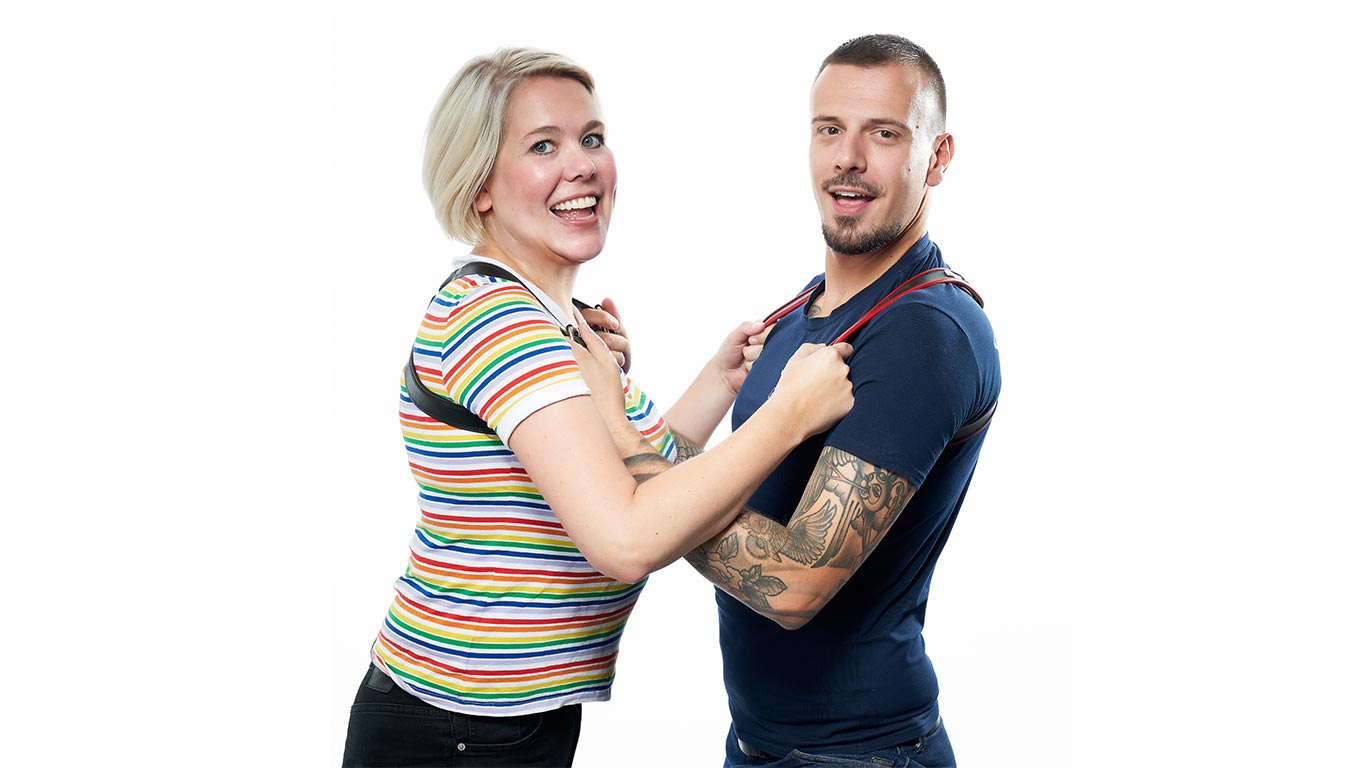 (Disclaimer: this article was written in December of 2019 before the COVID-19 crisis hit and Social distancing wasn’t a thing yet)

We’re just going to confess it: we care about our looks. We want to come off as attractive, because we like to be objectified and desired. You wouldn’t tell from the way we look now though, brainstorming about this article. Usually we do that with loads of wine, but since Thijs has to work afterwards, we restrict ourselves to an advocaatje, a traditional Dutch alcoholic beverage made from eggs, sugar and alcohol. (Ed. see also the FFF article in the previous issue of WINGS).  Advocaatjes are something our grandmothers used to drink: they’re old fashioned and dated. But this hip Amsterdam cafe whips them up on the spot and serves them with a hearty shot off vodka.

It’s winter, and in the Netherlands that means: short days filled with drizzle, making it extra cosy inside. We’re comparing the compliments we got on WINGS’ last issue. Sure, some people liked our ideas, but what really stood out were the photos of us, taken by the wonderful Cyriel. Linda has fictitious wind in her hair, like she just stepped out on an Italian balcony to greet the sun after having had fantastic sex. On his, Thijs appears to be casually looking away, as if the camera caught him doing something very naughty.

We love our pictures, even more so because, at the moment, we’re dressed in comfy, thick sweaters, all tattoos hidden from sight and without any make-up. Although any time could be ‘sexy time’, the image that we want to project in this lunchroom on this overcast December day is one of easy-going, urban professionals. We totally fit in.

Diversity is tied to big cities. They’re places where you can stand out or blend in with the masses. They provide safe spaces for those who’d probably be labelled ‘quaint’ or ‘quirky’ in a village. Within the cosmopolitan LGBTQ community, there’s room for outsiders and mavericks. It’s no coincidence that Q stands for Queer, once simply a synonym for weird, later a derogatory term for gays. The community took that word and hijacked it, turning it into an honorary nickname that both of us wear proudly.

We might fit in here and now, but that’s not our history. Failing to meet gender norms means punishment, whether silently or violently. For Thijs, it was not liking girls. For Linda: failing to be one. 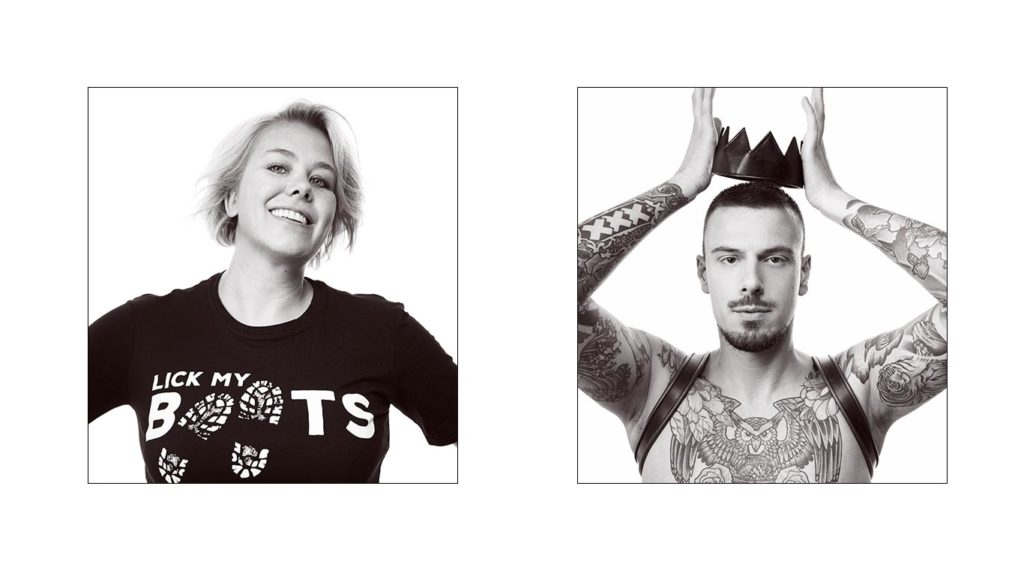 Queer, gay, non-binary, friend of Dorothy, tomboy, shirt lifter, butch, leather boy, femme, bear, agender, Mister B – we live in times when now, more than ever, we can be who want to be under the labels that we choose. Women can shave their heads, men can extend their eye-lashes, and all will be applauded for it. There are no limits to how we can look in our fairy queer world, but yet… when we think about it, we all pretty much look the same.

The posters of the circuit and fetish parties only show alpha men with toned torso’s, six-packs and luscious beards. If the posters are to be believed, these men are ready for war, they’ve come with an army and they fear nothing. ‘Hang on to your jockstrap, boy, I’ll eat you alive’. They’d never consume as many calories as we just spooned up, and most certainly would never wear a sweater or have a runny nose. We silently take another bite, Thijs of his veggie ciabatta with cheddar, Linda of her mince pie. Summer bodies are made in winter, but not now.

Of course, these posters don’t really represent people, they suggest people. They suggest a vibe and promise about these parties, that is to say that there’ll be hot, handsome, primal men there. The posters are meant to show something recognizable, so we know that it’s our type of crowd. But they also perpetuate an ideal that’s disturbingly monotonous.

There are no limits to how we look in our fairy queer world, but we choose to look the same because it’s safe. Old patterns die hard. Women have been dealing with this much longer than gay men, as their physique has been their prime asset since time immemorial. The mechanism is the same: women and gay men learn that if we want to do well with the boys, we have to ooze sex. And although there’s no manual, no written guidelines, we know which ingredients to use.

Thijs likes tattoos because they’re cool, kinky and in most cases work like an

Aphrodisiac. Why they’re cool? Because just like piercings (most notably those in the septum, glans or nipple), they exude victory. ‘I have suffered to look like this, and I enjoyed it. I can do to you what I’ve done to myself. Just come closer, if you dare.’ And closer they come.

A thin waist is no different, as is a waxed pussy or anus. They’re small testaments to a willingness to suffer for sex. In that sense, they’re actually codes.

Now don’t get us wrong, we are not against a little (or a lot of) suffering for sex. We’re just disappointed that, even after all these years, the ‘repertoire’ remains so limited. It’s as if our imagination cannot carry us further than the men on the posters. Just like the mainstream, the queer scene has developed rules and conventions, that are constantly produced and reproduced, and that we all know how to read.

Asking the waitress for some water, we pause our sociological contemplation. How we’d like to hate the men on these posters! Thijs has never fitted in Nasty Pig briefs and Linda hates her belly too much to go shirtless to Club Church. We’d like to hate these men, but we can’t. Because despite our analytical skills, our media savviness and our critical reflection on all this, we’re part of this world. We’re part of it and we perpetuate the illusion. Just check WINGS’ previous issue!

There’s solace in uniformity, and that also applies to the alternative universes that LGBTQ people have created. There’s safety in numbers, and there’s pleasure in likeness. ‘Identity’ is all about being different to some, but similar to others. And although we might not look as perfect as the circuit poster boys, they represent our scene. It’s where we like to be, because it’s where we find each other. No need for guilt over lunch either, we decide. We’ll just ask Cyriel to tuck in our tummies again.